“Whoop whoop! Hire us for all of your shipping and AI mechanic needs!” — Strawberry Mocha, trying out advertising.

Job: AI specialist mechanic and shipping of goods, usually too large for normal means
Likes: Her AIs, Her mate and friends, Racing with her Hermes, Doing mechanic work, Shipping, Snow and the cold in general
Dislikes: People not taking her seriously, Abuse towards AIs, getting Spooked,Being tricked
Notable contributions: Strawberry has amazing credit in the Mechanic community.She helps calm even more rambunctious AIs into settling down. One of the reliable and friendliest people to call for AI's help as she is good at her job and many AIs vouch for her skill.

Strawberry Mocha is a thick furred, fluffy polar aftik that stands at a grand five feet five inches with a long and thick, sturdy tail. With soft brown fur and lighter highlights on her face, the palm of the hands, legs, and under her tail. She also has pastel pink accents, pink cheek marks, pink claws, and a shining pink guiding light. Her casual wear includes a nice pink cowboy hat that is always tied to her head with her signature brown and a pink striped scarf tied into a bow around her neck. She wears a thick and tasseled pink leather jacket with an equally tasseled cream shirt underneath. Her signature clothing choice is her light pink chaps that are worn over her nice blue jorts.

Strawberry Mocha can be described as any aftik you may see on the streets. She's delighted and willing to do anything asked of her. Also very vocalized too, unlike the norms of a usual female aftik. If she sees anyone messing with her AIs or any stray AIs, she'll gladly show you the aggressiveness an aftik can have.

Despite this, she gets stressed if she can't seem to figure out a problem or is under time restrictions. She can easily panic and get agitated by such. In dire situations, she relies on her AI crew if anything comes up. Strawberry is also known to be spooked easily and will chew someone out for doing it on purpose, a lot like her Hermes. A Lot of times too, she'll help anyone down on their luck, AIs more likely to the point it is not worth it for her.

Mechanic work and crew teamwork have always been in her blood. Her parents were mechanics, and so far and so forth. She was practically raised on ships, always found tinkering with any scrap metal or tools laying around. Her dreams of helping AIs didn't start until she was gifted a build-your-own-AI. She built her own little Helios unit and has been best friends ever since. Even if Helios was trying to teach her important things, she was more interested in playing and dressing him up.

For a good portion of her years, Strawberry simply went around advertising and building up her mechanic name. She went planet to planet fixing up anything she could find,mainly doing odd jobs. Over time her brand name grew as did her crew. She soon had a few Hermes down on their luck come along too. On a spare junkyard, after offering her mechanic prowess for parts she built a mecha Hermes shell. Thus starting up her brand new shipping side business. While she still is well known for mechanical work, there is a lot of business that needs shipping for larger goods.

Rumor has she did mechanic work for over 20 AIs in only one day but when asked she denied such a feat.She says it was only 19 that day but it was clearly in a joking tone.Now Strawberry usually spends her time at her ranch, where she farms and runs a rescue AI shop for any that needs help who passes by. Though she is always willing to go out for AI repair calls and is very genuine when helping with them. She loves and cares for all AIs she meets on her way. Thus, making a name for being a great mechanic for all your needs.

Calming touch: Strawberry has been known to help calm even the most aggressive and unwilling AIs into getting help. It helps as she treats them like actual people and listens to them, and waits for them to allow treatment. Only in extreme cases will she attempt a forceful shut down as a last resort. Especially good AIs may even get a little sticker or reward for their time.

• Strawberry was offered a job to turn to Piracy but turned it down. She's more than content to be the on-call mechanic and mail shipper. That and she also didn't want to lose her good credit.

• While she is super friendly and willing to barter, Strawberry does have an intimidating side. It also helps having a Hermes that is over twice your size and a Somnus hanging around.

• Due to being a full Polar Aftik, she won't hesitate to puff up her feathers to look scarier than she really is. Alternatively, she also overheats pretty quickly and likes to have a chilly room on hand. If she could, she would sleep in the snow straight. 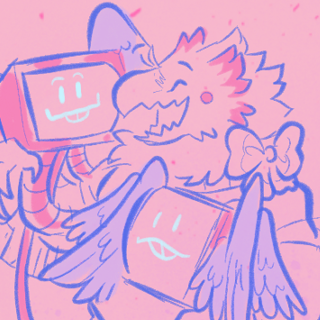 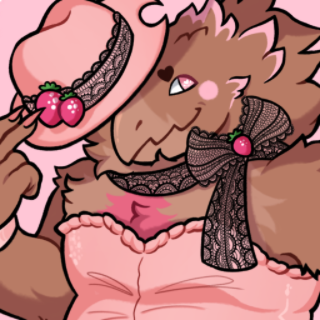