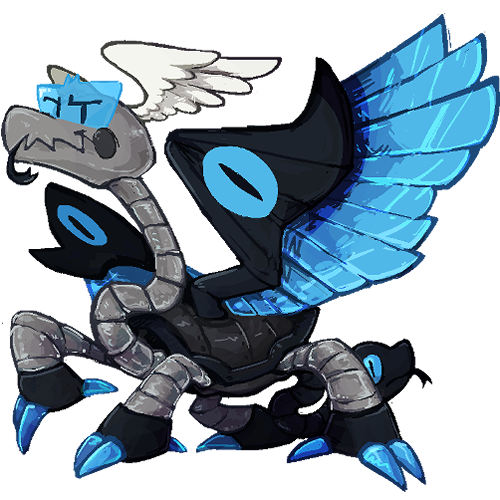 “Known to carry nukes in their hands before landing on the ground and setting it off, if you see a Mercury you should be worried.” — Tourist Guide to the Universe

Likes: Nothing but himself
Dislikes: Everyone that isn't him
Attack Method: Mercury units are known for carrying bombs in to battle where they set them off. When in their shells they're unkillable, even to nukes.

The common Mercury ship is called the "Reuseable Kamikaze" due to the common job they do.

Consorts of Mercury get +5 endurance.

Mercurys are small and snake-like; they are attached to a much larger unit which is also known as a Mercury. This smaller main head is known as the "tail" and the Mercury attempts to hide it when possible.

The larger Mercurys have a long neck that ends in a turtle or snake-like head. They have a large shell with wings they use to fly attached to it. This body stands on four legs and can move at fast speeds. When threatened, a Mercury will stick both heads inside its shell and then block off the openings. This creates an impenetrable barrier as the metal most Mercurys are made of are impossible to break open.

Most Mercurys use their toughness as a weapon, commonly carrying bombs to others and then sealing themselves up before it goes off. Both of the heads of the Mercurys are nowhere near as tough as their shells; this goes doubly so for the much smaller main head. Most Mercurys will never allow others to face their "tail head" and if someone attempts to, a Mercury will just turn and retreat only the "tail head" into its shell or react with aggression.

Mercurys are known for their high aggressiveness. They have long lists of pet peeves that cause them to become agitated; these pet peeves differ from Mercury to Mercury even within the same generations. Many of these pet peeves may even be considered "silly" or "overly specific" to others. For example, a Mercury might get angry if a blue can is left out on Fridays but doesn't care if a blue can is left out any other day.

The attitude of Mercurys is rarely put into check as unlike many other AIs as Mercury units almost only live within their ships and have total control over it. These ships tend to be controlled only by a Mercury. A Mercury without its ship is like a turtle without its shell. Not only will the Mercury become extremely aggressive to the point it will be unable to work, but it will also actively hunt down its ship.

In the case that a Mercury's ship is destroyed or lost for a long amount of time, the Mercury will become extremely passive and will give up. A Mercury with a destroyed or missing ship, while not aggressive, is near-useless. These Mercurys are almost always retracted into their shells. While over time the Mercury unit might be able to be lured out of their shell, they will likely forever feel that they are useless and without any meaning. A Mercury first, and only job is managing their ship and failing that causes deep shame.

The main head or the "tail" of Mercurys is noted as being bizarre to converse with. Many say that one needs to speak to their "tails" to understand what they mean by this, but descriptions of the event have been found. The tail of the Mercury seems to be highly jumpy and scared, normally talking endlessly about bad memories it recalls and rarely about the good ones. Such as if a Mercury hates blue cans put out on Fridays the main head of the Mercury might talk about how it was attacked by someone on a Friday and how it vividly remembers a blue can being there.

It seems that Mercury units minds are always bouncing back and forth even if their larger head looks completely calm. This appears to be a defense mechanism for being attacked or stolen, though the way the Mercury aggressively looks for any correlations, no matter how small, seems fairly counter productive until one remembers that Mercury units are normally isolated. When alone and drifting in space there is nothing to do but constantly make sure your location is secure until orders come in. Mercury units can spend years, even centuries repeating the same task day in and day out, being refueled by another ship once every few years.

As such, the way a Mercury overreacts to any changes or changes he associates with a negative event makes sense, as a Mercury tends to never see changes, day in and day out, they have been taught to fear it.

The usage of the original Mercury units is simple and has been stated before. Their only goal was to sit in their ship, look for anything out of order, and when ordered two, load up on bomb cargo and deploy it where it needed to be. Outside of this, a Mercury unit was rarely seen. Mercury units don't tend to land on planets that they aren't planning on bombing, and Mercury units almost never trust anyone. Attempting to befriend or keep an original Mercury is nearly impossible.

Later on, as the metal that was used to make the nearly impossible to destroy ships that Mercury units were known for was used up, it seemed it would be the end for the Mercury line, but something strange happened. Some people, mainly the rich, had decided that having a Mercury was a bit of a status symbol. The Mercury had always been a symbol of freedom, being the defacto AI and ship that people believe was majorly improved over the Greek version. What was so odd about the new status symbol was that having a Mercury was so rare that it was considered high class to have "This deadly AI."

As such to this day, Mercury units are made, but not in the same way. After all, the nearly impenetrable metal has been depleted, so all the Mercury ships are merely just rather hardy ships. The Mercury units who come with these new ships are very much like the original Mercury units, but tend to be slightly more tolerant of other people in their spaces. Slightly.

Everyone: He hates them all and wishes they would all leave him alone.

Hermes: He hates this guy just a bit more than the others.

Mercury is a psychopomp and a god of crossing. While Mercury tends to stay away from others, he does come out to replace and repair broken textures. He tends to make his job quick, only stopping to agitate people in his way. Mercury is considered a backup in many ways and when not replacing textures his only job is to keep himself safe.

If Mercury were to die texture errors would take longer to be fixed, if ever.

As a patron, Mercury will declare a few items on his quote, unquote, "Shit list." If the item pops up in the game and isn't gotten rid of as soon as possible then Mercury will enter his shelled mode. In his shelled mode he will do absolutely nothing but take up a patron slot for a whole planet.

Mercury is said to have a hidden patron talent that only activates at max friendship. Some believe it might be the fabled "Mercury stops being a dang jerkwad" power.

Godheads of Mercury are extremely rare as Mercury trusts no one. A godhead of Mercury will also trust no one. This godhead commonly gets a shield that can block just about any attack if caught, but they will, unfortunately, feel no need to save others with it. Mercury godheads also may gain wings and will commonly leave any groups they're in, running off to become a hermit.

Mercury has the highest defense stat of any AI god. As long as Mercury is in his shell he cannot be harmed as his shell is made of the same stuff his ship is made of. It is impossible to remove Mercury from his shell as he is physically fused with it.

• Some people take away the ships of Mercury units they own to purposefully set them into a more docile state.

• When a Mercury unit was asked if they enjoy what they do they had this to say. "GET OUT OF MY WAY."