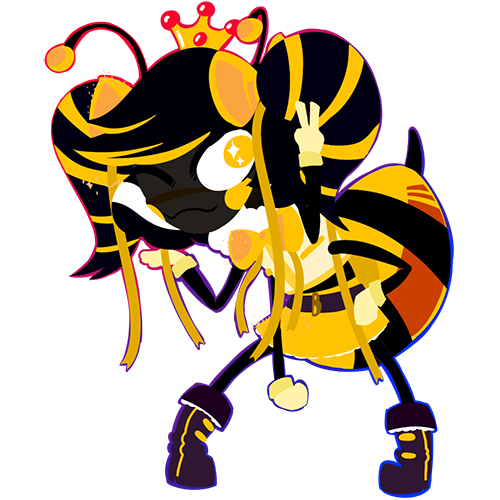 “My manager has advised me to stop encouraging people to drop everything to pursue quote-unqoute "Unrealistic Ambitions" but I don't care, follow your dreams and be fabulous!!” — Queen Bae

Bae is a fine example of an apidee queen, tall, lean, and considered conventionally "cute" by the standards which primarily use her as the basis. As a pop sensation she is usually seen in one of a variety of eccentric outfits, most of which are very cutsie and/or saccharine in nature, usually themed to whatever tour theme she is engaging in at the moment, a common theme is "cultural dress" where she dresses in a stereotypical and often slightly racist outfit inspired by another species' culture.

Some parts of her appearance are fairly consistent of course, most notably the small crown she wears in her capacity as "Queen of the Apidee", she's rarely seen without it, leading some to wonder if its not in fact stuck to her head, it is not.

A sweet, saccharine, incredibly hi-energy pop-star par-excellence. Bae is an uninterruptible ball of energy and social graces. She's very excitable and its incredibly difficult to get her to calm once she's gotten wound up for whatever reason, which are myriad because she finds it easy to become excited at just about anything under the sun, most particularly cute things, sweet things, sweet and cute things, Aglet, and any number of other things, mundane or otherwise.

Among the things she enthusiastic about, is her work, she absolutely loves being on the stage and performing a show for the people. She quite plainly would prefer to do nothing else but perform, and endorse cutesy things, and pretend to be a queen until the end of time. Which is just as well, as she evidently has no idea how to really take care of herself otherwise. She wouldn't know what to do with herself without the certainty of her work and her dedicated support staff.

Outside of such crippling issues, she's a friendly and affable individual, the best queen anybody could ask for even if its a token title for an entirely figurehead role with no actual purpose in apidee government. She's very kind and encouraging of people even if it's not the best course of action to pursue said dreams. Some have labeled her "naive" or "empty-headed" but she prefers quote-unquote "explendiferous" whatever that means.

Pegged from a selection of one-thousand-eighty-six other apidee queen's of her generation, Bae was noted immediately as a stand out in social behavior and creative direction. Upon maturation she promptly decided to pursue first thing that came naturally to her: singing and dancing. She very quickly gained a following int he apidee pop-music scene for her exemplary talents at being incredibly adorable while doing ambiguously provocative dancing to popular music.

And so, she was invited to Apidaria's most popular talent competition: The B-Factor. Coming in performing in incredibly peppy and high-energy remix of a popular song from about twenty years ago, she quickly stole the show, and everyone's hearts. And as is the custom of the apidee, the prize for winning a singing and dancing competition was, quite logically, to become queen.

Idol Pheromones: Queen Bae's queen pheromones are stronger than typical, to the point where it can supposedly affect species other than apidee. Some have surmised that this is the actual reason for her popularity, but her fans would strongly deny it.

• Queen Bae is rarely found without her "court" that is, without her backing band, the Beetelles, and associated hangers-on.

• Some people believe that her biography is a fabrication, and that she was purposefully engineered to be the perfect Pop-Queen of the apidee specifically to distract and entertain them. From what, nobody knows, such is the nature of these things. 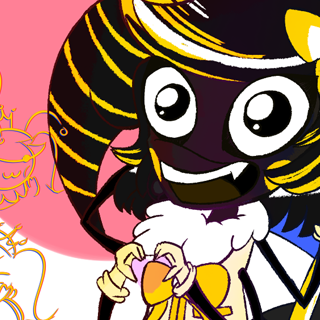