“Don't bother me when I'm working. I don't care about how much pain you have. Either shut up, or let me end your pain permanently. -mO” — O-8 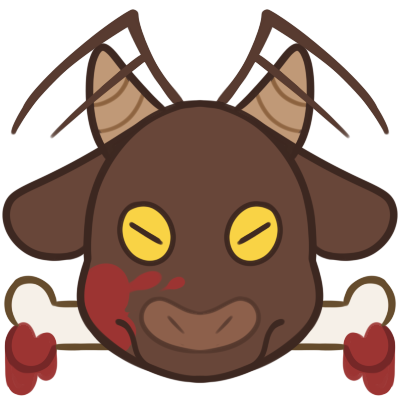 Job: Notail Leader of the A-class, S-class, and X-class
Likes: Work, That's it
Dislikes: Anyone who points out that something is off about him, Distractions
Notable contributions: O-8 is the leader of the A-bomination, S-urgeon, and X-enobiology classes. O-8 runs and orders big name and long term experiments, almost all bio related. O-8 has pioneered many new surgeries.

In the deep dark depths of a notail planet, stands a cruel monster. An upright posture, never wavering, the head of a goat, and a finely trimmed lab coat only marred by one thing, bones ripping through the body of the beast. This beast is known as O-8, O-8 is an abomination, not only physically, but in action.

The head of O-8 is covered in a goat head, one that used to walk and breath like all other things that have lived. The goat head can vary in looks, but generally comes from a breed with medium size horns, dark fur, and golden eyes, though nowadays O-8 replaces these eyes with glass or plastic eyes. The two antennas that poke out of his head always face backwards, twitching when he gets agitated. O-8's skin is tan in coloration.

What O-8 looks like under the mask is hard to describe. His true face is described to be a mix of a thorn head and a notail, though with short boney spikes growing out. It isn't uncommon for O-8 to grab one of the bones that are sticking out of his body and snap them off to use as a tool or weapon.

The beast who lives under the notail planet, or as he normally called, O-8 is an absolute shut in. He doesn't like being bothered by anyone unless they're working for him. He works days on end without sleeping, and when it's time for an O-class meeting he stomps his way out of his underground lab to join it. His main lab is directly under the O-class building where meetings are held. The moment he can get out of the meeting he slinks back to the darkness of his lab.

It seems the only thing that distracts O-8 is his studies and experimentation on notails and aliens. Sometimes not even that satisfies him and he lashes out, stabbing subjects in his rage as the pain caused by his bones sends him in an aggressive state. His staff are already prepared for this happening, with at least two notail standing guard with a tranquilizer gun at all times around him. If O-8 isn't tranquilized he either comes to his senses after a few moments and takes out his own tranquilizer to inject into himself, or he escalates.

When O-8 escalates no one can stop him. Not even tranquilizers will affect him as his bone production hits full speed and he rapidly mutates into a monster that doesn't resemble his form before. Covered in bones to the point that no skin can be seen and on all fours, this monster only wishes to destroy any living life in his way.

O-8 seems to want to do anything possible to prevent this, but it may just be because he hates having a few years of his life missing from his mind.

If one were to ever get audience with O-8 they would find he attempts to be polite but fails so badly he might actually be hurting his chances. O-8 talks endlessly about his experiments, all he wants to do is get back to them, social interactions are just a distraction, but this isn't the real O-8. The way he acts is merely him pretending to be the last O-8, as such, no one knows what O-8's real personality is like because he's always attempting to fit in.

An abomination of many masks, O-8 is a rather rare type of abomination that pretends to be a normal notail and attempts to blend into society so that it may prey on other notails or other species who accept notails around them. In a bit of an ironic twist of fate, O-8 is non aggressive for an abomination of his type. Rarely O-8 will completely abandoned his disguise as O-8 and attempt to be another O-class.

When this happens the best thing for that O-class to do is turn around and go on a vacation, and just come to meetings wearing a goat head as "O-8" until O-8 gets bored and returns to being his original disguise. Not doing so risks murder by O-8 or worse, entrapment in his labs for a few months until he's ready to stop.

When he's pretending to be another O-class he's rather piss poor at the job, seeming like a horrible parody of the O-class. In this state he keeps the emotes the O-class does but instead makes it a sad or angry version.

Thankfully all the other O-class roles bore or confuse him and he returns to his labs once more to experiment on subjects and order what new research the X and S-classes should work on. One day he will find a cure for his endless pain, but until then he can figure out how to get rid of others.

Most of O-8's history is quite foggy as there is nothing to go on but data that was on his records as he himself refuses to provide information regarding his true self.

There was nothing indicating that anything was wrong with O-8 when he was created. To everyone O-8 was a perfectly fine S-urgeon class notail. There were some worries about him early on in life though, as he proved to be a problem notail, who was far more aggressive than normal S-classes. Caretakers worked to correct his behavior issues and taught him that biting and attacking other kids was improper and hugely impolite. O-8 seemed to be able to learn this though still displayed problematic actions such as stealing and was put on a watch list for later.

In O-8's time in the woods O-8 had started to display symptoms of something being wrong as it's reported that he started growing bones out of his back. Thought to be an early mutation and nothing more by caretaker notails out in the woods he was let out once again to continue his time in the woods. It seemed the rates of deaths for those years very slightly dipped up but it is unknown if this is related to O-8 as rates constantly dip in and out.

O-8 got a job as a typical S-class doing work he was trained to do. While O-8 had anger outbursts and delivered aggressive threats to some when he calmed down he normally would apologize like he was trained to do by caretakers. The bones jutting out of him progressed more, people at his work place were starting to expect there was a lot more wrong with O-8 than just his anger.

This was confirmed when he appeared to have killed a coworker in their home and took over their identity. Now everyone knew he was a mimic A-bomination, a type of abomination who tended to prey on notail populations by acting normal and blending in, only transforming to their true form when angered or attacked. Unwilling to deal with a possibly massively deadly A-class the people of the labs left O-8 to do his work there while they waited for orders on what to do with him.

Surprisingly the current O-8 at the time was bemused by this A-class and the fact it had enough mental capacity to still do such a complex job. After months of him working there, the current O-8 just had to have such an interesting creature in his labs working for him, and as such he was brought over to work.

Months later people walked into work and watched as O-8 experimented with the dead body of the now dead old O-8. O-8 kept acting like a poor interpretation of the old O-8. There was much debate in the sidelines about what to do. O-8 continued his work as if he was O-8 the whole time.

O-8 had become some sort of joke, a gag among notails. Perhaps it is because notails have a sick sense of humor that O-8 was accepted as he was. The thought of such a monster that notails fear working with notails was far too amusing, reminiscent of the same thoughts the old O-8 had months before death.

A-bomination: O-8 is an A-class, meaning that he is an abomination. O-8 is a rather odd in that he seems just as intelligent as any other notail and it seems that by getting the correct and needed help early in his life that he is able to control violent anger outbursts. Most of his outbursts end in nothing more than objects and already dead bodies getting damaged as he normally makes it clear for people to get out the room.

• O-8 seems to say sorry on reflex if asked to apologize for a situation even if he's not sorry. Aggressively asking him for an apology will make him feel unaccepted in that situation and will likely cause him to become violent.

• O-8 says that he fully believes he has always been O-8, and that he never killed the old O-8. As he is a mimic A-class this is typical predatory lying. 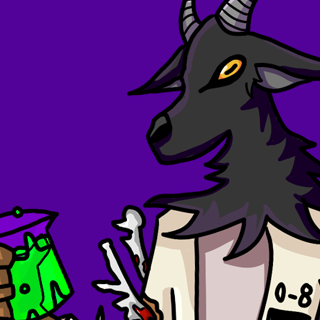 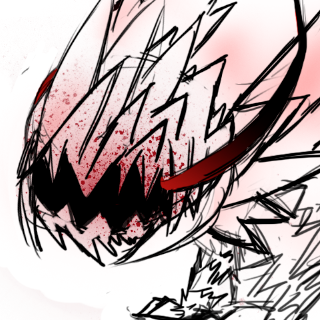 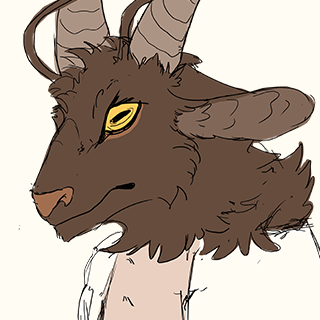 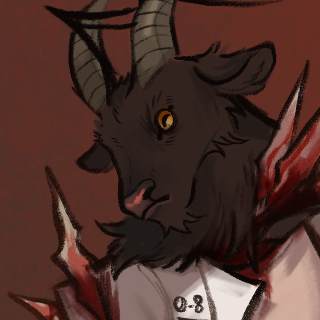 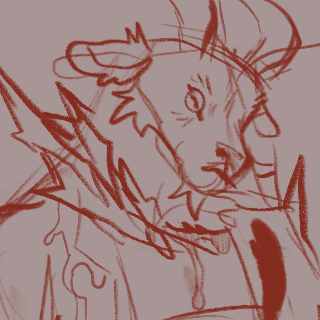