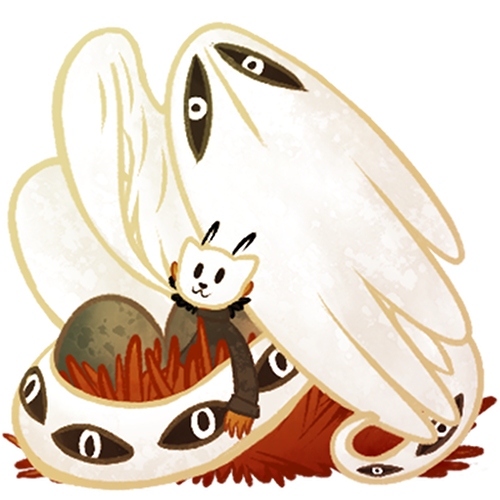 “They'll never take their eyes off you OR your camp!” — Notail's guide to picking a starter 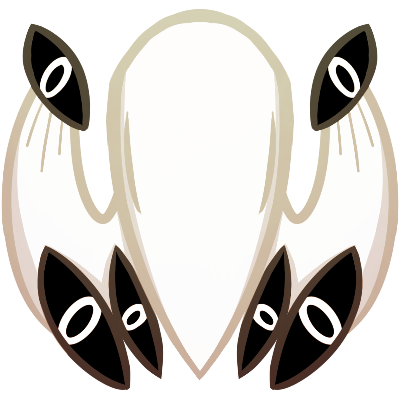 Eyegrets are tall birds with white feathers, long necks, long legs, and an even longer tail covered in white scales. Although they are quite large and have an impressive wingspan, this isn't their most striking feature; the most immediately noticeable thing about eyegrets is in fact the number of eyes they have. There are two on either side of their head, as with most bird-like creatures, as well as three along each side of their neck, three on each wing, and ten all along their tail for a total of twenty-four.

However, eyegrets don't usually keep all of these eyes open at once. At any given time, 4-8 will be closed or half shut; an eyegret with every eye open is an eyegret that is watching you very, very carefully.

With a lifespan of only 5 years, they mature incredibly quickly, and a typical eyegret egg will hatch in a few days, reach adulthood by the age of one week, and breeding age by the time they're one year old. Eyegrets don't need a partner to have children, so if they are fertile at all, they will lay eggs and raise chicks for the entirety of the remaining years of their lives.

Eyegrets are capture creatures bred to aid notail young in their time in the forest, and is most often given to U-ndercover and M-atriarch classes. They are highly territorial, and will attack and kill any other adult eyegret they see in their territory. This includes their own former children; although eyegrets are very protective and nurturing towards chicks under a week old, any child over such is seen as a threat and kicked out of the nest. From there, the eyegret child must find a new territory for itself, get ripped apart, or kill its parent and claim the territory for itself.

Although eyegrets are given to both U-ndercover and M-atriarch notails, the way the two classes are treated is very different. Both receive the eyegret before it is of breeding age, and by the time they enter the forest, it is old enough to lay eggs, but after that their experiences diverge greatly.

U-ndercover class children take the role of the eyegret's child. By the time they enter the forest, the eyegret will treat its notail owner as a newborn chick, and as such the first week is a "freebie." During this time, they receive ample protection and affection from the eyegret, but when the week is over, they're driven out of the nest and forced to abandon any possessions they may have left there. The only way to extend the eyegret's care is to come back disguised as a new notail, climb into the nest while it is sleeping, and allow it to wake up, see the notail there, and assume one of its eggs must have hatched. This disguise must be new every time; eyegrets remember every single one of their children and reusing a disguise will cause it to think one of its "adult" children has returned, and it will attack. It doesn't just remember appearances, though; eyegrets will also recall habits, preferences, dislikes, etc, so the child must learn not to have any and simply fake them for the various roles they play. Over time they become excellent actors at the cost of losing all sense of personal identity, perfectly preparing them for their place in notail society as informants and infiltrators.

M-atriarch class children, on the other hand, are put into the role of a symbiotic babysitting species. Before eyegrets were modified as use for capture creatures, they had a symbiotic relationship with a species that raised their young in exchange for shelter, protection, and food. As such, the M-atriarch notail takes care of the chicks and receives a guard and a regular supply of food in return for their efforts. However, if any chick dies while in the notail's care, the eyegret will attack and kill them. At the same time, though, the notail children can't afford to get too attached to the eyegret chicks; few will live much longer than a week as the eyegret parent almost immediately turns on them, and any that do will be driven off and never seen again if they don't want to be ripped apart. This trains the M-atriarch notails to take proper care of notail children in the future, while at the same time not getting too sentimental over them.

An U-ndercover class with an eyegret capture creature will typically go through 150-200+ disguises throughout their time in the forest, while a M-atriarch class will typically raise 700-1000+ eyegret chicks to maturity.

Non-breeding: This is the variant given to U-ndercover class children. These eyegrets are sterile, so although their species do not need mates to have children, this variant will still never lay eggs. Instead, it will brood over a pile of egg-shaped rocks, and if its notail owner comes back with a disguise good enough to fool it, it will assume that one of the eggs simply hatched and this is a newborn to take care of. These eyegrets will typically not seek a babysitting symbiote as it is not considered worth the effort to have one when there is only a single child to take care of at once.

Breeding: This is the variant given to M-atriarch class children. These eyegrets will have many, many children, usually laying 3-7 eggs per week and killing most of them by the time they reach adulthood. Although it is possible for another notail to sneak in and trick this variant into thinking it is one of its children, this is a bad idea as they will either have to continue disguising themselves or else leave the area entirely, as after a week passes they would be seen as an adult eyegret and a threat.

Fancy: This variant is never given to notails as starters, instead sold as high status pets typically advertised as striking birds with lovely singing voices to impress guests with. They're much less aggressive than their counterparts and only have children once a year, which the owner can then sell off to other people seeking fancy eyegrets.

Perfect Recall: Eyegrets remember every face they've ever seen. As a result,they will recognize every single one of its U-ndercover class owner's disguises and the notail will need to constantly play new roles if it wants to live.

• One strategy U-ndercover class notails can use to deal with troublesome neighbors is disguising themself as that notail for a week, switch disguises once the time comes, and then lead their eyegret to the notail they disguised themself as so it can rip them to shreds. The eyegret then may or may not offer the corpse to its child to eat.

• U-ndercover class notails leaving the forest tend to have a very large collection of various faces they've made for their myriad disguises. 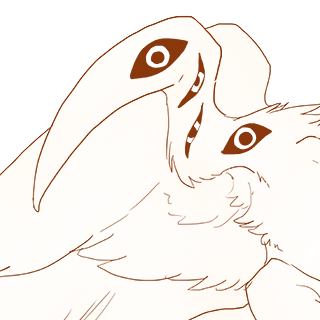 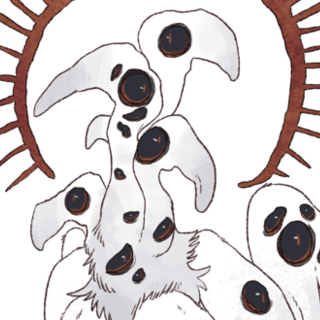