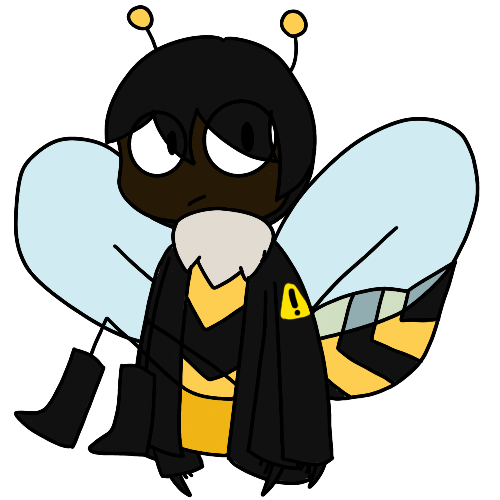 “Hey, stop running! I already said I'm not going to stab you!” — Jacket whenever they meet a new person

Job: Exterminator
Likes: Fire, Cleaning, Wrecking things, Flowers, Fresh meat, Not being touched, Their team
Dislikes: Unkempt spaces, Infectous clockworks, Pests, Being touched without permission, People that yell at them, People that start running when they see them, People that hate them for no reason
Notable contributions: Leads a group of reformed vespidees that slays pests and clockworks.

[Excitable] Neutral trait
This character gets excited easier than others.
[Humerous] Neutral trait
This character has a humorous personality and likes to joke and play around with others. In most cases their japes are harmless, though they are not necessarily funny and can really try the patience of those less easily amused.
[Ultimate Acrobat] Positive trait
This character can fit themselves into small spaces and are quick on their feet. This character's agility stat goes beyond the 10 rule.
[Blood Pumper] Positive trait
This character passively causes other characters to get more excited, awake and emotional when nearby. This may increase the morale of those nearby and make them be more confident. This will only work for organic people, while Empowering will only work for mechanical people. This trait is the opposite of [Calming Presence].
[Teamwork] Positive trait
This character has a great time working with others. Anytime they work with a specific person they consider a partner, they gain +2 to the task they're working on. Restrictions: Does not stack with other teamwork buffing traits.
[Shifty] Negative trait
Something about this character seems off, whether it's the look in their eyes to how they move around, they give off an untrustworthy aura. Other characters are more prone to doubt and accuse this character if anything suspicious or bad were to happen, regardless of whether they did it or not.
[Auto-attack] Negative trait
This character will automatically attack anyone, including teammates, when a certain condition is met such as getting too close to them or saying a certain word.
[Bottled Rage] Negative trait
This character will store away their anger or other such emotions whenever they feel them and won't tell others about the anger they're feeling. Because of this, after too much anger has been stored up, they will be prone to burst at even the smallest thing and fly into a fit of rage.

Jacket is a petite example of a vespidee. They have straight black hair from which barely stick out their two short antennae. They are unnaturally fast, being able to outspeed almost every threat they face.

Despite their tiny appearance Jacket is also extremely strong. While not particularly muscular, they know which points to hit to ensure the most amount of damage.

They can be rarely seen wearing anything other than one of their namesake jackets which are so oversized only the tip of their fingers can be seen. This is standard for any of their clothes, as Jacket will refuse to wear anything that does not at least partially cover their arm stingers.

Their jackets are usually black and yellow, although on special occasions they prefer to wear yellow and black. Jacket's clothes always feature some sort of danger sign on them: a warning for those who think about getting too close.

When around new people Jacket tries their best to act as harmless as possible: they speak in an overly informal way to make themselves seem more friendly, they smile with their mouth closed to avoid showing people their sharp teeth, they keep their arms rested so that their sleeves cover their stingers completely. But as soon as a stranger touches them, Jacket snaps.

If they're lucky, the person will get off being yelled at for a few minutes.

If they're unlucky, they're almost certainly getting stabbed.

Jacket feels guilty afterwards, although they will remark that they chose to ignore the warnings, and in turn got what was expected. Jacket especially hates it when people start running as soon as they see them, even after they try their best to be approachable. When this happens Jacket will usually start running after the poor person, waving their arms while shouting things like:

which, although they're trying to sound reassuring, people still interpret as a threats.

When Jacket is around teammates or friends they are extremely open and sociable, even going so far as giving the permission to be touched by them. Whenever they're around people they trust Jacket becomes loud, excitable and determined, and truthfully their teammates feel the exact same way when they're around Jacket. Something about being in their presence makes them energy, which is useful when dealing with a mild cockroach infestation or a deadly clockwork strain. For this reason Jacket is almost never by themselves. If Jacket's somewhere, you can safely bet that their swarm of vespidees is not too far away.

Jacket, like most vespidees, used to be a criminal.

For the first few years of their life they bounced around different solar systems while following a band of thieves on a ship they stole.

One day Jacket and their gang narrowly escaped getting caught by the police after robbing a convenience store. Their ship managed to take off just in time, but it didn't take long for it to suddenly stopped moving. While everyone was trying to figure out what was wrong, their leader revealed themselves to be a clockwork that had lured them into a trap. It attacked everyone on board until Jacket was the last person remaining. They locked themselves in the control room where they desperately sent a distress signal to the planet they had just left, promising to turn themselves if they managed to survive.

Luckily, they ended up getting rescued in time. Unluckily, they were arrested and put in prison.

After having their life saved by the authorities Jacket made the decision to no longer be a criminal. They managed to get time off prison for good conduct and started working as a clockwork hunter and exterminator on different planets. Unfortunately, every time they were called to provide their services people would inevitably freak out upon seeing them, sometimes they looked more scared of them than the things they were getting paid to kill. For a some time Jacket tried their best to pass of as an apidee, as at least their small stature made him look the part, although as soon as their stingers showed everyone around him would start to scream and run the other way.

The cycle of get to a city, establish yourself as an apidee, do your job, have your true nature revealed eventually became extremely upsetting for them. After some time Jacket stopped pretending and embraced the fact that everyone thought they were dangerous. They started to collaborate with local criminals, and soon working for them counted as community service.

Many previously convicted vespidees found their calling in slaying pests and clockworks. Since they all wear almost identical looking jackets their team is usually referred to "the Jackets", even though the official name is "Jacket's Pest and Clockwork Control Service".

Swarm intelligence: Jacket and their team are extremely coordinated. Even when there's only a few of them in the same location they are able to synchronize. They are like this even when doing a simple disinfestation. It can look very extra.

• Jacket's team has made a list which compiles the types of pests they're willing to kill. If something is not on that list, they will refuse the job. Notable exclusions from this list include anomalies, planetary clockworks, notails, and wasps.

• Since Jacket's team is made out of only vespidees and they all wear the same clothes sometimes it's hard to tell them apart when they're working. This is not a problem for them, and in fact it's a voluntary tactic to confuse the target.

• Jacket gets along with apidees just fine, altough sometimes they will remark that they "smell delicious" and that they "wouldn't mind giving one a bite".