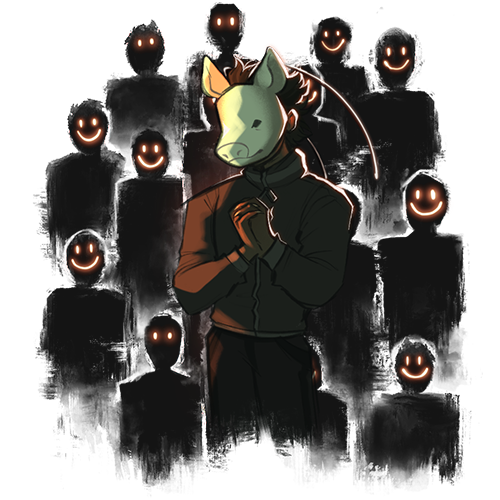 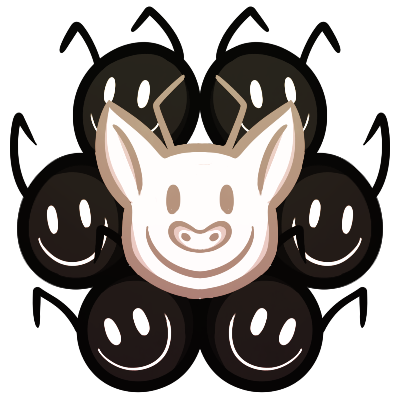 Job: Notail Leader of the G-class and D-class
Likes: Depends on the notail
Dislikes: Depends on the notail
Notable contributions: O-12 is the leader of the G-eneral and D-ud classes. O-12 is "The people" and thus is the representive for all common notails. Every week 1 more O-12 will join the O-class ranks, with the end goal being 12 O-12's, at which point "The People" will be able to vote out all the other O-classes.

O-12 looks vary based on the notail(s) that they are at the time. While it used to be tradition for every O-12 to wear a mask of a pig, this is no longer the norm.

O-12's personality depends on what notail(s) they are. O-12 is to be a representation of the people, and as such referring to them as a singular person in any shape or form is considered extremely impolite and grounds for correction. This is true even if O-12 is currently just one notail at the moment, which is a common amount of O-12s.

Most O-12 find themselves either fearing their likely demise or excited for even the chance at being able to make a difference and are willing to fight tooth and nail to survive long enough to do it. All O-12s are followed by one or more guards. This guard is not to protect O-12, but to protect O-class secrets. If at any moment an O-12 attempts to leak info or run away they are eliminated.

Every week one notail is picked randomly via a lottery to become the next O-12, this applies even if there is another O-12, as the point of O-12 is to gain enough O-12s, which is 12 of them, to vote out the O-classes. If 12 O-12s can survive everything possible it will show that the people are have finally outgrown such systems. They have yet to even get close to this as O-12s are normally set on rather deadly missions with some of the O-classes who are specialized and trained to survive the missions just fine. Due to the high chance of death for an O-12, there is normally one or two existing at the same time, the most ever recorded was five O-12s who were then all killed in the same week by "unfortunate events" as all O-12s die by.

If an O-12 survives until the monthly O-class meeting, the O-12 will be allowed to bring up issues they believe in, debate and vote on issues that happen in the meeting.

For some O-12s they see being picked to be O-12 as a death sentence, and attempt to find ways to escape it all. For others this is the only chance they got to make an impact, and they're going to fight to the death for their chance in the spotlight.

They were the representation of the people, and thus would be dying for them.

Every O-class would go to the monthly meeting with O-1, and then after they would be sent on their death mission. If the O-class member came back from the mission they would be allowed to stay for one more month and see one more meeting before once again being sent to their death.

Something odd happened over time though. Month after month, after year and year, sometimes a notail would keep surviving the death challenges. Given enough time the O-class spots would barely change month to month, with mostly everyone figuring out a way to survive. The system would no longer work, as people practically took over some slots. A new system was made, one that gathered the best of the best, but O-12 would decidedly always run on the same system.

If the O-12s reached 12 members, every member but O-1 and O-12 would be wiped off the board and the old system would reign again. If yet again all O-class slots became taken by notails who survived for more than five months, the other system would win and the notails would not be required to be sent on death missions once again. This system was meant to go back and forth, and it did in the early years, but slowly over time the permanent O-classes system would rise faster and stay longer.

It's been over 5000 years since the last system flip, and some of the O-classes don't seem to shy in coyly hinting that they sabotage a few O-12s.

The People: Even O-12s are implanted with special antennas that allow them communicate much more strongly than a normal notail. Some use this to get more help on their missions but as most notails know these missions mean death, they aren't jumping up to the chance to do them.

• It is legal for any non O-class notail to kill an O-12, and due to the requirements of being an O-12 being absolutely nothing, they will automatically become O-12 then and there. There's been very few assassinations of O-12 members as being O-12 is a death sentence.

• Running away or being kidnapped automatically counts as a death. In the case of both the O-12 will be killed on sight as it is always possible for them to have secrets that notails are unwilling to have leaked.

• In the traditional O-class system as the new O-classes walked out of the O-class building to their missions notails would gather to watch them leave in silence. This is known as a silent funeral. It's where notails inform each other that a person has died via their mental signals. Notails gather around to silently view the body, possibly even reach their hands out to touch it just once, before slinking off immediately and with no other comment. Now that O-12s leave to missions all the time holding a mock funeral has fallen out of practice, but if an O-12 starts living longer than expected slowly but surely more and more notails will arrive to see O-12 off. 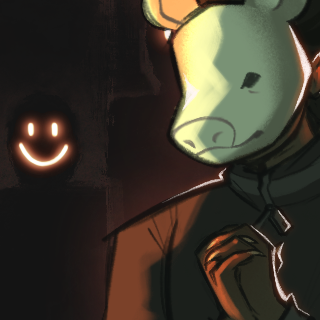