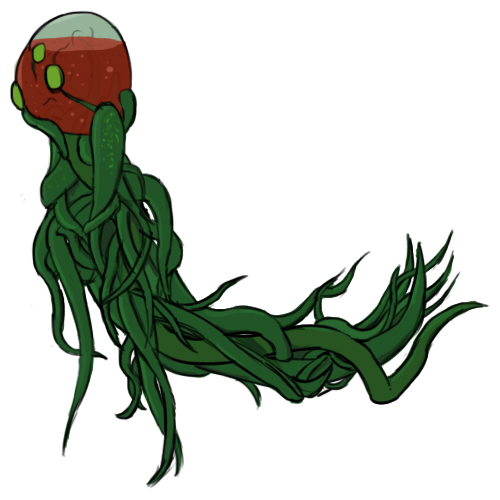 “We live, we grow, we turn into giant silent trees. You know, the usual.” — Plantolk philosopher

Attack Method: Let opponent come within reach, then use vines to grab and strangle them to death.

It is unknown if the plantolk have anyone they honor.

Plantolk are generally made of green vines forming a body that trails out, getting thinner and thinner as it goes. They do not have true hands, but they can manipulate their vine ends in a manner similar to hands, though this leaves them a bit clumsy. In the place of their head is a large semi-translucent orb of varying colors which is filled with some kind of liquid. The liquid contain is usually water mixed with a bit of the matter they eat which causes the water to become dyed. This sack has eye-like growths which allows them to see, but this trait is not all that refined. Their hearing, and vocal systems are all located beneath their roots while their entire digestive system is their head.

The personality of a plantolk heavily depending on the individual. Many wish to settle down and become immobile trees, while others avoid that fate at all costs. The "settlers" are honorable, traditional, and narrow minded. The "avoiders" are open minded, roamers, and tend to be self centered.

Plantolk reproduce by burying themselves and changing into trees. This gives them longer lives and the ability to produce children, but they give up their abilities to move and speak. About two-thirds of plantolk choose to do this, and ones who don't are generally looked down upon by other plantolk.

The discovery of them by other sentient life forms was a huge one, causing both settlers and avoiders to scatter across the galaxy.

Plainborn: This subspecies has vivid green roots, with heads in reddish colors. They come from forested and grassy areas.

Mountainborn: Mountainborn come from rocky and sandy areas, with brownish roots and yellowish heads. Due to coming from rough areas, they are tougher and can go longer without food.

Waterborn: Waterborns come from areas with lots of water, namely swamps and rivers. They have blue-green vines and blue heads. Most waterborn are amphibious.

• Despite their traditionalist nature, the settler plantolk are just as excited about space travel as their roamer counterparts, if not more so. Finding the perfect planet in order to live on is very, very important for the settlers, and so you'll often see them as tourists or explorers.

• Plantolk are often despised by prunus (another species that becomes trees), who have no choice whether or not to become trees. There is a deep rivalry between the two species, and it's often a bad idea for them to work together unless there is a mediator.

• One of the few, and most effective ways of stopping a settler-roamer argument is to yell a tree pun. If there's one thing the two groups can agree on it's that they hate tree puns. This often results in broken bones for the punner.