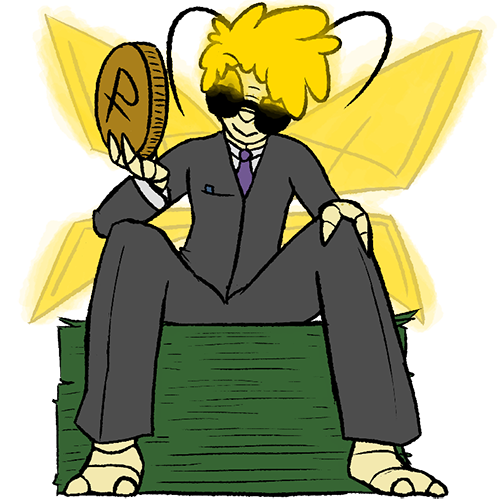 “his week on UBC, Davney and X-222's relationship hits a rocky turn on All My Xs, Geode the Viedafo and Poppy the Zanni face each other to avoid elimination in Spice of Life, and a special sneak peek at the latest crew off to challenge death itself!” — Universe Broadcast Company bumper

Bizz is a yellow glowing fairy with big poofy hair that some have claimed started life as a pompadour that simply wouldn't stay still. His wings are pointier than that of your average fairy's, and he can almost always be found wearing a trendy business suit, and his signature sunglasses.

Bizz is a man that knows what he's after. If you happen to come across Bizz, he already knows whether he's too busy to deal with you, or if you have something that he wants. And when he wants something, chances are he's going to get it.

Bizz has developed a certain reputation for negotiation. His media production company, Big Bizz Media, manages to put out television programs shot in places and with people that many other companies have tried and failed to secure the rights for.

In front of cameras he's boisterous and eager, always ready to pursue his next great project, or boasting about the success of his most recent production. Behind cameras it's said that he's well spoken and good at giving advice and direction, although there is always the feeling that he's trying to use you in more ways than are obvious.

Produced as a thesis film for his time in film school, Destination Restoration took place on location at an active deforestation site, depicting it negatively, with a story about attempting to shut it down. Criticism was levied against Bizz for his guerilla filmmaking techniques, but it was later revealed he had used his now famous negotiation techniques to get permission to film despite the themes. The deforestation was shut down in response to the film, and is now a nature reserve.

Originally another story based film like his first film, the plan was to film on Kivver, an 'underrated and underappreciated' frozen planet. The production went off the rails, however, due to the planet's conditions, and Bizz had made a snap decision to film and document the process of attempting to make a movie on such a frozen wasteland. The original planned film was never completed, but Permafrost was regarded as an incredibly successful survival documentary.

An autobiographical piece regarding Bizz's great success with his first two widely released films, and how the success had changed his life. It's been considered to be thoughtfully critical about the meaning of wealth and how it can affect creativity and views on the world in general. Bizz states that he'll do his best to never lose sight of what's important, and keep hold of his artistic integrity.

Inspired by the popularity of the ride-along documentary style of Permafrost, Bizz secretly sent hidden camera crews to join existing expeditions and high intensity jobs. The first season received average reviews, and thanks to a sponsorship deal, a second season was funded, featuring more meddling from the hidden camera crews, and the introduction of the Chow Dome Flavor Cam during group meals. Currently Bizz's longest running production.

Pitched as a critical look at the unethical state of many of the universe's food industries, critics claimed that in practice, it felt more like an attack on many of the competitors of the Chow Dome, which notably received a sparkling clean depiction in the documentary. Reviews were negative, and this is Bizz's final film as a director.

After his departure from directing, he ramped up his producer role and started developing new ideas for television more often, with a new reality series appearing on networks on a monthly basis under his production studio. Popular series have included All My Xs, Station Salvage, and Survivalism. Reception on most of these shows is that they are schlocky at best, but they consistently obtain very high viewership.

Every year, hundreds of people die trying to reach the legendary planet of Fortuna. Sometimes this is documented. Seasons of The Fortuna Experience are usually short, but every time a new season is announced, rumors always circulate that this is going to be the one.

A helixian developed a relationship with and got married to what he thought was a Gondii, but after the ceremony, it was discovered that actually it was one of their hosts, with no brain worm attached! Watch as this unlikely couple tries to make it work!

Suggestion: Some have claimed that Bizz's negotiation techniques go beyond being simply a smooth talker, and are actually somewhat hypnotic in nature. Backing up such claims are that he seems to get his way easier on projects backed with other fairies, but nothing conclusive has ever been presented to this end.

• Bizz's relationship with the Chow Dome quietly ceased after a large scale ecosystem disruption on a planet to construct the Super Ultra Chow Dome. No link between these events were officially confirmed.

• Rumor has it that Bizz has still pursued directing under pseudonyms for independent studios. Big Bizz Media strongly denies such rumors. 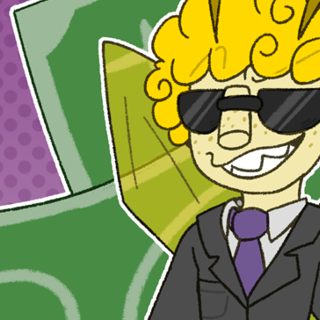