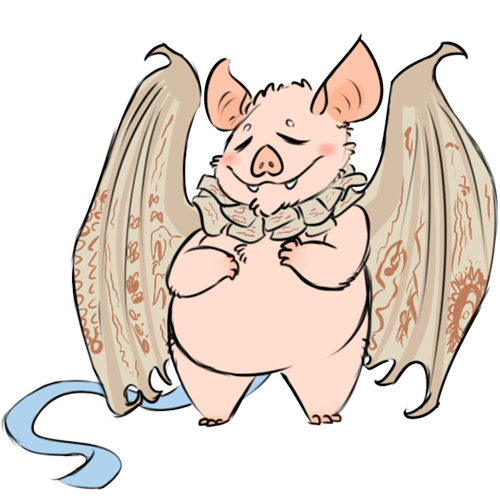 “Oh, you know what? I heard the sun is actually a huge snake! Yeah, a giant snake! Of farts!” — A Gnosis after reading a book about the sun

Attack Method: Yell random various gibberish before flicking the attacker in the face with their tail.

The Gnosis rarely worship anyone, believing a majority of god's history to be another tale of fancy like the ones they say.

The gnosis have furry skin. The colour of their fur varies from every gnosis, but most often are a dull or pastel color. Very rarely will a gnosis be coloured brightly. They have triangular ears on top of their heads, which are very sensitive to sound. They are bipedal and are often seen with wings on their backs, often decorated by the gnosis. These wings are not meant for flight, but rather as defense. The gnosis will use the wings, however fragile, to block off potential attacks. The gnosis commonly have "manes" on their necks made from various papers from their favorite documents. Their tail is merely an extra limb stitched to the Gnosis at birth. It is made of fabric and often used as a bookmark.

Gnosis are generally rather talkative creatures, eager to inquire about various stories. Often they take the information from these stories and compile them to make a new one, leading to various rumors about practically every species. Many have learned to believe whatever the gnosis say are simply stories modified to suit their fancy. They are known to read more quickly the other species by literally reading with their mouths, making it look like as if they are devouring the book. They prefer to live in quiet areas, due to their ears being too sensitive for loud city districts.

The gnosis' history is in fact, commonly tampered with, and as such one should never try to ask a gnosis for a basic history of their species. Below is what we assume is the truth of their history, based in the common correlation all their stories have.

The gnosis were not always so closed off on their planet. They originally lived on the tallest trees, their wings far more adapted to flight. They etched any murals and information they had to store on logs and trees. As such, this is the only confirmed fact we can find on their species. Any traveler who comes to Istopia and decides to visit the area beyond their planet can find scratches and writing on the trees.

The gnosis were quite happy with the arrangement. Some older gnosis had spoken of having "castles in the sky", which they lived in quite happily. Some say they lived on a dragon's back, who always stayed in their settlement at night. The variations grow on and on, but it's easy to assume they were quite safe.

If it were not for the sudden increase in invasive fauna, they would have lived there forever.

Fauna on Istopia suddenly began to increase at an alarming rate. Some theorize this is because the fauna at their planet constantly went unchecked, as their diet didn't require the need to consume meat. Some gnosis who agree add in their stories the antagonist only succeeded due to them not realizing they were there. It can be assumed that they slowly picked them off the passive fauna. When the more passive fauna began to die out, they decided to prey on the gnosis.

The gnosis had to resort to live elsewhere. From story to story, how it happened varies- from wether they found an oasis or built it from scratch after being found multiple times- but it always somehow ends with them building a dome. The very same dome that surrounds Istopia's only town.

Now they live in peace, hoping the dome will be enough to quell the fauna from their anger.

The gnosis' wings and tail often store a different version of this history we were able to find. This is their way of honoring. As such, it's not hard to find them holding past documents of people they loved in their manes. If one for any reason wishes to hear a gnosis tell the tale of their people, an excerpt of their story is here.

"-so, then you know- we gotta live on these real nice clouds, right? Except they weren't very solid, so we had to make it so we could lie on them real nice. So y'know, that's why we had tails!

Well of course it's so we can use them as a bookmark! Why do you think we have them?

Anyway, so it was real nice there! We had like these, little hanging things. They were like fairy lights, but they actually kept us warm and safe! Sometimes we had a dragon come in here too, so they visit us and helped us with food. But it wouldn't be a story without a problem, and a problem is what we had.

There was a good old lady in one of the old clouds, and she said to us, "There is a darkness in our midst. We must eliminate it before it forces us to leave."

We laughed at her, of course! There's nothing that can harm us, you know, being up so high.

She tried to warn us, she really did. She'd make us listen to her every day, and well, it was a real neat story, you know. We kinda pretty much had to! One day she didn't come. We didn't notice it at first until someone told us they found her tail.

That was the only thing we found of her that day.

We thought, maybe she ran off somewhere! But we all saw the blood, you know. We all saw it. Then the darkness took us, one by one. There were bloody tails, slobbery ones too, night after night. Kept on hearing these footsteps sometimes, when we went to sleep on the clouds. We were so scared!

So then some of us say, well, we can't have the darkness. So what gets rid of the darkness?

That's when we made a dome of light! We made them from mirrors, so that when the sun decides to visit her sunny face, she'll be the one to protect us!

And that's why we honor the sun!

Of course we don't honor the sun! Jeez-"

Both areas seem as if they belong elsewhere. The half filled with fauna is decorated with plants, trees, and lakes. There are rumors there are Pan units residing there, mostly undisturbed. The other half has a thriving modern community there. The place where most gnosis live is within a glass dome surrounded by a fence for protection against the fauna. Outside the dome, the area is devoid of plants, save the grass. There is also a small area outside for fuel and spaceships, should any gnosis wish to leave.

Witail: A gnosis may be born with only their complete upper half instead of being completely bipedal. This creates a qitail. A qitail will be given a tail to compensate for their lack of legs, and will carry their items with their tails. Their tails do not function like a bookmark for them, and using it as such will cause them harm.

Witails often prefers visual media compared to written media, and will prefer to consume it instead. A qitail is also more sociable than a gnosis, often exiting their homes to visit various conventions and to see the areas their media consumption depicts.

• Gnosis actually enjoy listening to rock music, if the volume is low enough.

• The most common stories written by gnosis tend to be published online. More often, common comments will say they suspect the characters being people they've met before. 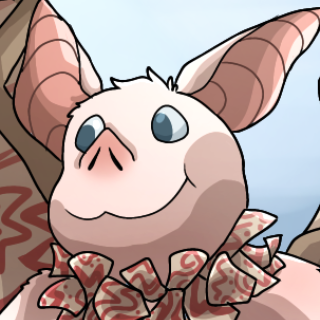