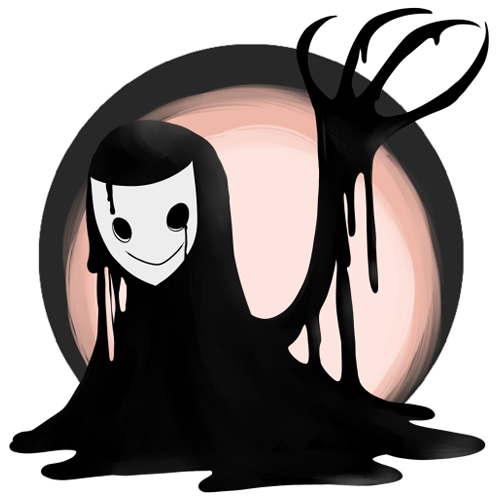 “Of course Jet is an aftik, honey! Sometimes aftiks are just towers of black goo. We can't judge people for their appearances.” — An aftik parent to their child

Attack Method: Slashing with their claws or smothering by enveloping their target with their body. Will often (try to) use the attack methods of the species they're mimicking.

[Clumsy] Neutral trait
This character is more likely to drop objects or make small mistakes. Sometimes their mistakes end up being for the better, but most of the time the mistake are small.
[Detrivore] Positive trait
This character takes no penalties from eating rotten or rancid rations. In fact, it's good for them.
[BO] Negative trait
This character's Charisma score is lowered to 1 for all who can smell the repulsive odor wafting from their various, unwashed pores. Gross.

Goopmicks usually adopt the gods of their chosen species.

Goopmicks are towers of black sludge with long, thin arms ending in sharp, spindly claws. They are always found wearing poorly-made masks of other species. It is said that the only thing under the mask is a hole. Unfortunately for them, they always exude a stench of decomposing plant matter.

To eat, a goopmick will envelop its food with its gooey body and absorb it. Some goopmicks encase their goo in the skin, shell, carapace or whatever else of the species displayed on their mask. Others wear things to imitate it, such as fake fur or plastic.

Goopmicks do not exist in any official capacity. They do not appear on censii, are not mentioned in any records, and have no government. This is a safety measure. If it were not the case, billions of people would die.

Goopmicks do not believe they are goopmicks. Their identity revolves around the masks they wear; from the moment of their birth to the moment of their death each goopmick is absolutely convinced it is the species its mask displays. If it is pointed out to a goopmick that this is not actually the case, they will not be able to wrap their head around it at all. First they will grow antsy and evasive, trying to laugh it off as their accuser talking nonsense; if pressed they become snappish and may even yell at their accuser to back off; and finally, if the accuser attempts to touch or take off the goopmick's mask, the goopmick will lash out in a blind rage that only stops if the accuser is either driven off or dead. When the goopmick comes back to themself they will be completely unaware of what happened and unable to explain their behaviour; most will feel terrible about doing such a thing.

Despite being unable to identify as their own species, they are able to see through other goopmicks' disguises. Nevertheless they find themselves 'inexplicably' drawn to other goopmicks, and find the smell that most species wrinkle their noses at perfectly tolerable.

Remember: Always treat a goopmick as a member of the species they believe they are. It's both a safety measure and good manners.

Goopmicks, of course, do not record their own history. Only through careful archaeological study have other species managed to piece together what happened Mlenyedor prior to the goopmicks' space age.

Long ago, the goopmicks, which back then wore no masks at all, were mere scavengers at the heels of a colossal and advanced predatory race which called themselves the kunotra. While blind and deaf, kunotra used touch and a powerful psychic sense to navigate. They could pinpoint the goopmicks, their main prey, by mental signatures: a psychic ping that declared "I am a goopmick." Goopmicks to the kunotra were merely pests that would clog machinery with their gooey trails and eat anything left lying in reach. As technology improved and the kunotras' cities consumed more and more of the landscape, the goopmicks grew more and more bothersome until the kunotra decided they should move on to other prey and drive goopmicks extinct.

Their downfall came because not all goopmicks believed they were goopmicks.

Some carried a mental illness that left them convinced from birth that they were not goopmicks, but kunotra. They escaped the culling only by their certainty that they did not belong in it. As they passed their condition along to their children, some were discovered when kunotra touched them; but each of them, when found out, would slaughter their attackers. This went on until none of the predators remained. Goopmicks had taken their faces, their carapaces and their places; their technologies, their cities, all of it now belonged to the prey they had tried to exterminate.

By building on the technology of what had once terrified them, goopmicks, with the 'illness' now spread species-wide, eventually achieved space travel. Once out in the universe, their children began to imprint on other species until they achieved their current status.

Absorption: A goopmick can absorb just about anything by enveloping it in its body. It will increase in size proportionately to the size of whatever it absorbed, though the bigger it grows the more volatile it will become as its mind has difficulty reconciling its size with its supposed species.

• Goopmicks are edible. If you can stand the smell, they have a sweet taste.

• If a goopmick is caught in the act of preparing their covering, they will be completely nonresponsive, carrying out their work as though in a trance. Only if any attempt is made to stop them will they lash out to drive the intruder away, then resume as though nothing happened.

• It's largely unknown how a goopmick chooses which species to mimic, though it's possible that the first voice they hear makes a deep impression.