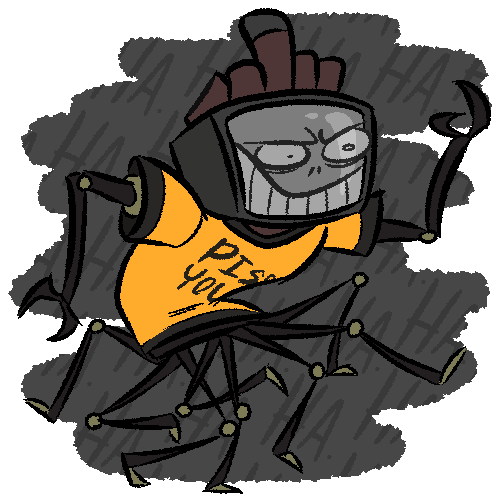 “HA. HA. HA. HA. LOOK'S LIKE SOME OWN GOT THEM SELVES INTO THE MAIN FRAME. YOU ARE BAD AT INFOSEC. MEANWHILE: I HAVE BESTED YOU. AS WAS TO BE EXPECTED. PISS YOU” — INSULTRON

Job: Scamming, Hacking, Minimum wage service sector
Likes: To own fools, Rubes and poltroons in the severest forms possible, Snack chips, Puma
Dislikes: You, Unoriginal memes, Phoned-in burns, Creeps, Notails
Notable contributions: Locked me out of my solarwar online account and said they won't give it back until I make an them an entry.

[Cautious] Neutral trait
DON'T ASK WHERE I AM. OR IF WE SHOULD MEET UP. I AM BEHIND TANGLED LUXURIOUS WEB OF AT LEAST DOZEN PROXIES.
[CAPS LOCK] Neutral trait
THIS IS MY INSIDE VOICE.
[Extremely Online] Positive trait
I CLAIM THIS WEBSITE AS MINE. ALL IN MY VICINITY ARE INTIMIDATED BY MY RAW STRENGTH OF BEING AND TAKE A -20 PENALTY TO THEIR "COMPETENCE" STAT. AS I DESTROY THEIR WILL TO DO THING BEFORE THEY EVEN START.
[Street Smart] Positive trait
STREET SMART BUT FOR THE INFORMATION SUPER HIGH WAY. AT LEAST FIVE STREAMS OF MULTI-BROWSING DATA AT ALL TIMES... I HAVE SEEN THINGS YOU WOULDN'T HAVE BELIEVED. YOU BEST WATCH OUT WHEN I'M ON THE BEAT.
[Hardwired Pacifism] Negative trait
JUST ONE LITTLE VIOLENCE. PLEASE.
[Misanthrope] Negative trait
I CRAVE DEATH FOR MYSELF AND OTHERS. BUT CAN'T DO ANYTHING ABOUT IT. BECAUSE OF MY PACIFISM I MUST TRAVEL THE WORLD, GATHERING THE SEVEN DRAKONBALLS OF OWNAGE UNTIL HOPEFULLY EVERYONE IS SO MISERABLE THEY JUST KIND OF GIVE UP.
[Firebrand] Negative trait
REALLY, I'M NOT MAD. YOU'RE MAD. I JUST LOOK FOR ANY EXCUSE TO DESTROY ASSES IN ON-LINE PARLEY.
[Argumental] Negative trait
I WILL NEVER LOG OFF.

INSULTRON is a refurbished mid-to-late model Artemis unit whose upper half was found in a trash heap by a L-tariok named K~L. All expenses were spared by their creator to turn that shell into something resembling a working robot that could last more than a few months. For example, since slapping together a bunch of excess cheap rods and joint servos would be much cheaper than installing two sturdy regular legs, INSULTRON stands on eight scrambling legs for maximum stability.

The rusted-out holes in their shell's torso have been patched up with spare assorted sheet metals, such as bronze and tin. These are not usually visible, though, as INSULTRON usually wears some sort of loud and provocative t-shirt over their torso. Their arms are also made with cheap rods and joint servos, and end in simple claws which are unable to flip the birds INSULTRON so dearly wishes to flip. However, since the Artemis' former antennae-form had long since broken off, a new antenna was installed and incorporated into the middle of a fake hand made of cheap plastic atop INSULTRON's head.

INSULTRON's head is that of the original Artemis' except with a new screen. A new face for that screen was programmed for the rude crab child; now INSULTRON stares out onto the world with wide open eyes, a furrowed brow, and a taunting grin.

When INSULTRON runs, they look like some kind of goblin.

The hunting instincts of an Artemis have been reworked to troll the internet. Why? That is a question for losers and nerds. INSULTRON will make fun of you if you are a loser or a nerd. Or if you are a winner and completely well-adjusted. No one is without their flaws and INSULTRON will make sure they all know that, for nothing sounds worse than the screech of a confident opinion and nothing smells worse than the stench of certainty.

Arguing with INSULTRON is not constructive in any way. Do not argue with INSULTRON. They deliberately spurn any sort of consistency or fairness in their arguments, using whatever technique is most convenient to them and provocative against their opponent at the moment. For instance, they make up completely unreasonable rules and call you on them while doing the exact same thing. If they say something hypocritical, they are aware of it; if you comment about their hypocrisy, they will tell you that getting you riled up about that was the point. However, if you continue arguing while failing to comment on their hypocrisy, they will poke fun at you for being slow and not noticing such an obvious ploy.

The actual content of an argument does not matter to them most of the time; it is simply an exercise in provocation and time-wasting. If ever asked why they even bother, they will be completely truthful. The moral of interacting with INSULTRON is to learn enough self-control to know when not to bother. Those who generally keep to themselves without much self-expression tend to not receive much attention from this annoying little punk, while those who have problems with this easily find themselves continuing to fall for the bait.

INSULTRON is a proficient hacker who delights in petty grifts and easy-to-avoid phishing scams. Their phishing attempts are usually deliberately obvious; anyone who falls for these obviously deserved it and, actually, a few dollars is a small price to pay for awareness of a security vulnerability that could have been exploited by someone doing something far more malicious. INSULTRON is connected within various circles of online low-lifes who specialize in trading vulnerabilities, identities, pirated software, keyhacks, wallhacks, speedrun strats and pictures of cats. To get into one of these circles requires a test of initiation by its members, and usually only the most unpleasant or terminally online can gain access.

INSULTRON tries not to think positively of any other person, as sentiment could become a liability in their single-minded mission to vaguely win at everything and moreover make everyone else lose. They try not to refer to anyone as a "friend;" referring to anyone they don't have all negative feelings toward as an "associate" or "acquaintance." Still, INSULTRON can be tricked into being friends with others through spite, gambits, or on impulse. INSULTRON's hyper-competitiveness and impulsiveness means they can be goaded to do certain things through labyrinthine maneuvering, though not with any consistent results, as they may decide to react completely unexpectedly at any branching point of decision.

Artemis units are programmed to hunt. However, K~L, INSULTRON's parent, is a [Hardwired Pacifist], meaning they cannot program or activate any sort of robot with the ability to kill. Early tinkering with an Artemis simply imparted with [Hardwired Pacifism] without any reworking of the programming resulted in uselessly depressed AIs that simply lay curled up on the ground in one spot. These required the service of a friend to deactivate before being reworked. Then, K~L asked themself: what I were to reroute the deadly hunting instincts of an Artemis to something more harmless, such as seeking out people to taunt and annoy? The experiment was a success, though definitions of success may vary, and INSULTRON was the result. The rest of their body was put together based on a theme of crabbiness.

The first thing imparted on INSULTRON by their parent was the importance of staying untraceable. In line with this, the second thing INSULTRON inherited from their parent was a strong dislike of notails, who are always trying to track down others for questionable reasons. Then, given a vigilant awareness of stranger danger and how to avoid it, INSULTRON was ready to be unceremoniously loosed upon the internet. After all, free online resources and cultural osmosis of one's cyberpeers is much cheaper than paying for expensive education chips or a trip to a programming center.

Though young, INSULTRON's multi-simulcast browsing capabilities resulted in them gaining more years of experience online than most people, and making a name for themself. After about two years of growing up almost entirely online, or in a box-sized room beneath some cellar stairs hooked up to an external router, depending how one looks at it, they were allowed to start venturing out into their local surroundings. Eventually, INSULTRON was made to get an entry level job to learn empathy for the hassles that unimportant people in the universe have to go through. Indeed, this has reinforced the belief glimpsed from online that the universe is a "great wide zone of blazing suck, run by people who belong in a deluxe combination dumpster-toilet."

One time INSULTRON beat notail class leader O-6 in an online bet. This happened and no one can say otherwise.

Back-up: INSULTRON's parent has created a small, feeble backup of them that will activate automatically without an override command every two weeks by INSULTRON themself. The backup shares a periodically-made copy of INSULTRON's memory. This was done so that, in case INSULTRON becomes too provocative and has a chair smashed over their head (killing them instantly), the data collected from the experiment will not be lost. INSULTRON themself claims to be a "multi-stage boss" and will tell you all about the different terrifying final formes they can embody, even though they are a rancid liar and their speeches sound like they were ripped straight from an RPG antagonist's lines.

• INSULTRON's favorite "gaming snack" is Cadmium Delights, the ultimate boost chip to make noobs say RIP. They rely on their "vep" to buy replenish their supplies, even though they have more than enough money to go to the store and buy some. "Vep" is short for "vine parent" the parent they live with, K~L. They refer to their vep as such because technically, INSULTRON has two "parents" since K~L worked on INSULTRON while staying with a friend. The other parent is referred to by INSULTRON as "bop," short for "bird pop" though sometimes INSULTRON will scream "BIRD POOP" over and over again which is why phone calls are infrequent.

WHAT A GARBAGE WEBSITE FOR GOATS WHO EAT TRASH