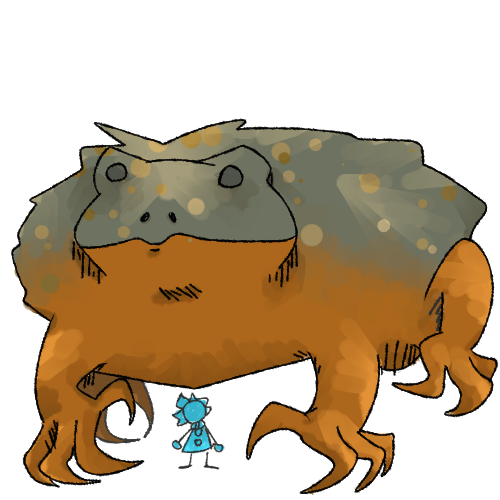 Attack Method: A pounce or two, then it's worn out. Swallow whole. Crushing enemies.

The voracious frog is a giant frog with claws. Its nostrils flare wide around the top of its mouth, with two beady eyes placed close together for such a massive beast. Great black pads cushion its feet like a cat and its back curves like a typical frog. The beast sports high quality camo, as if outfitted by some sort of military. Unlike many frogs it has a very small tongue, but it is cold blooded, and cannot survive or thrive in colder environments just like frogs.

The voracious frog can grow quite large if food is abundant. Well fed frogs can grow big enough to swallow small cars whole.

Younger voracious frogs start hunting early in life, lurking on ceilings, waiting to drop down. Due to how silent they are most creatures never see it coming. It'll eat flesh and plant with not a single thought in its mind. Anything that looks like food is food. Later on in life, the voracious frog will roam, looking for trees and carrion to strip clean. Often bigger than an elephant, moving voracious frogs are easy to spot.

The beast lumbers with it's mouth half open at all times, and if its mouth is opened fully, it is surely preparing to pounce or eat. Smaller voracious frogs are found in caves, while larger frogs seek out food more actively. If the environment is too cold or dry, the larger frogs hide in caves until the situation changes into its favor. The voracious frogs are native to Eukaryote and later ended up on other planets as invasive species due to thriving in tropical and temperate environments. In warm or hot moist areas, large frogs roam free, eating anything they put their mouths on.

Quiet Frogs: Quiet frogs are beloved pet among notail children. The young monster makes its mouth a home for a young notail to rest safely, protected from the wilderness. The young notail in return helps feed the beast. Notails write many fables about these beasts raising kids. There are rumors about notails eaten by the beasts, but such is widely regarded as fables. After all, anything that gets eaten, wasn't a real notail. These frogs are given to G and U-classes.

Voracious: This fauna is always hungry, and never stops eating if it has a choice.

• The notails regularly spread voracious frogs to planets they inhabit. Notails see killing the vicious monster as a fantastic event. If any frogs attempts to attack notail settlement they are quick to end them.