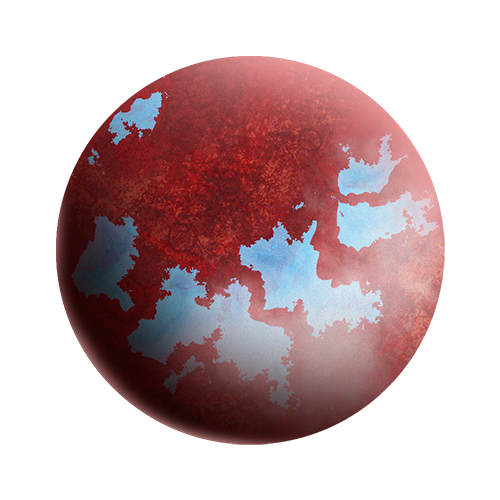 Discerning the original land of Saffaver is a difficult task. Most of the small dwarf planet has been fully developed and has undergone intensive (and expensive) terraforming, but inspection towards the less developed areas show a hilly and forested landscape. The air is cold but not uncomfortably so, and the red-hued pine trees cover most of the land that has not already been touched by notail hands.

A large lake takes up around a fifth of the planet's surface, but most of its shore has remained unused by the large museum that takes up most of the planet's surface. The area surrounding the lake is the largest area not incorporated into the museum, but everything inside of said museum has been shaped to be modern and easily accessible to travelers.

The different sectors of the museum are scattered across the planet and are connected by high-speed trains.

L-485, a notail landlord and an avid historian, sought to find a location to build a planet-wide museum, as she had the desire for it and far too much money to spend. She found a small dwarf planet for sale, Saffaver, and immediately started her work on developing the planet into a museum as soon as the purchase was made. The process was extremely intensive, but was quickly completed due to L-485's large amounts of wealth. L-485 opened Saffaver's doors with two massive exhibits to explore, No-Land and Limbo Park.

The substantial success of the museum led to the development of more areas, including Necropolis and the long-awaited exhibits that were primarily based around science, and not notail history or politics.

Profits gained from the Saffaver Museum allowed it to spread itself across nearly the entire surface of the planet, and expand its three main exhibits into massive playgrounds of education, fun, and notail propaganda. In its current state, it has 14 major sectors, but is dominated by Necropolis and its two original exhibits, No-Land and Limbo Park.

Saffaver is mostly run by the notails, but actively encourages people of all species to visit in return for profit. Each sector is run by a different person, but is headed by L-485, who resides in No-Land. The fourteen governors who work for L-485 run their respective sector's exhibits and employee management, and each bring any major changes to her for approval.

No-Land: One of the two original sectors of Saffaver, and the second largest, No-Land consists of miniature versions of each of the notail planets, their quality and scale ranging from small dioramas to fully terraformed and accessible areas of the sector. It offers a service to allow people to become amateur capture creatures by scattering weaker capture creatures and supplies around the sector for visitors to capture and battle with.

Limbo Park: The other original sector of Saffaver, Limbo Park is a sprawling amusement park filled with fun rides and carnival games centered around limboism. Visitors can also enjoy a Ferris wheel and frighteningly large varieties of deep-fried foods. Its crown attraction is a scavenger hunt around the whole of Limbo Park that ends in a simulated fight against the Neo itself. There are multiple blessing fountains scattered around the area, with a common legend that if you drop in a coin and wish for something from the limbo gods, it's more likely to come true. Anyone who actually becomes blessed is either taken to become a new attraction, or is used as cannon fodder for bored guards.

Necropolis: The largest location of Saffaver, and one that is sure to remind everyone why "Necromancy was not neat," as stated by one of the area's many slogans. The sector consists of recreations of cities destroyed by necromancy wars, which visitors get to explore as they read history plaques and get accosted by employees dressing up as the more famous necromancers. Members of "undead" species such as crawlerz and uutzi converts are also hired to walk the halls of Necropolis, giving the sector the air of an educational haunted house.

• The O-classes occasionally visit Saffaver to give demonstrations and public speeches to its visitors. O-6 has been banned due to popular request.

• Saffaver's smallest sector consists of nothing but a single astronaut suit, largely assumed to have once belonged to a Prometheus unit. However, few stick around long enough to come to any solid conclusions about its origins.

• No-Land is proud to display its brand-new A-class for all visitors to observe and interact with! No-Land is not responsible for any injuries gained while interacting with the A-class.