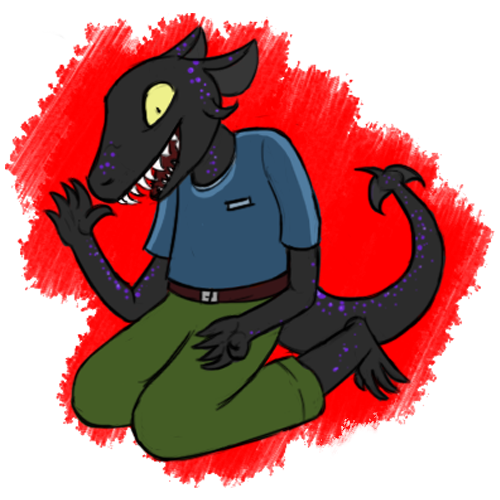 “See this prototype? My old man had stories about about these babies, pull the trigger and people start frying left and right.” — A noxis-noverum designing a new weapon.

Attack Method: What isn't their attack pattern? They know every move in the book.

Noxis have had many wars and battles over which god to believe in, it's safer to just pretend not to have a god when talking to a noxis.

The noxis are a race of bipedal aliens. They are covered in a tough, thick and flexible outer shell which varies in color. Their heads have a triangular shape, similar to that of a lizard, with wide mouths filled with sharp teeth, large yellow eyes, and tall half-cone shaped ears at the side of their heads. They have long arms and legs, with five fingers that end in semi-sharp points, and 4 toes that end in similar points that are flatter on the bottom.

The noxis have growths from their head that end in rounded points; the exact size, shape and location of these growths varies. The noxis have floppy wing-like appendages that come from around their shoulders, though these are often concealed with clothes. They also have long tails that end in two small wing-like flaps.

Most noxis are aggressive and easily angered, often leading to fights. They are very intelligent though, having made many advances in technology.

The noxis were a powerful, technologically advanced race, but they were also a war-loving one. Their planet was almost constantly covered in fighting, with each nation trying to create superior technology to defeat the rest. Nobody knows when it happened but eventually their constant wars destroyed their planet, along with other colonized worlds.

These days the descendants of those few noxis that survived on the outer colonies live secluded in large colonies scattered through space, their history and culture lost in the flames of their world. Occasionally, other species stumble upon these colonies. Some noxis leave to explore the universe. Those who do leave often end up working as mercenaries around the galaxy.

The shellless noxis: A type of noxis who does not have the shell most noxis have, instead they have a tough outer skin.

• The noxis preserve what little they left of their history well. Some of their most valued relics are pieces of ancient weaponry and most noxis know a series of war stories and battle songs by heart.

• Noxis colonies have very harsh reactions to unrest for fear of a repeat of their history. But since they are still very aggressive, fights keep happening and many noxis cycle in and out of prison.

• Having lost most of their history and culture, the noxis find that the fairies' made up tales are insults to injury. Some bitter noxis hand out spare bottles to those leaving their colonies because of this. 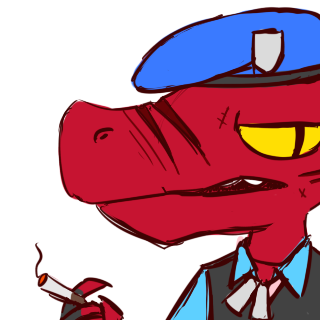 -Back to Species Menu-
< Novan
Oblein >