Kings of the Night sky 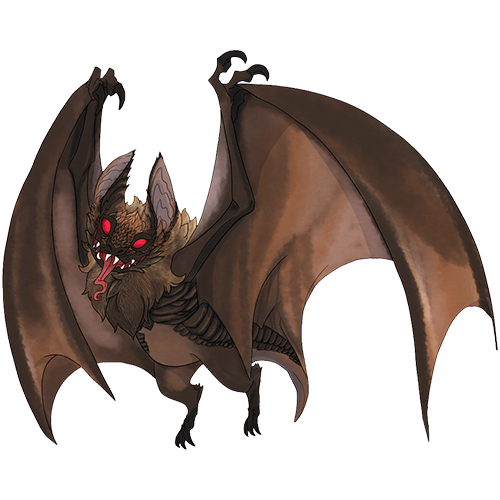 “We take these creatures as our symbol, for they are everything a von Drakken should strive for, Horrifying, Unrelenting, Noble, and Loyal.” — Draculas von Drakken

Attack Method: Swoop down from on high grab prey, then either drop from lethal height, or bite and thrash.

Essentially a bat around the size of a large bear, with a large batty face and big bat ears, the nichtendrakk is a large powerful beast around 8 feet tall, and 12 feet long from nose to rear. Much of it's body is covered in hardy scales, with the main exception of it's underbelly and parts of it's face. These scales are generally a dull dark gray, but some have shinier scales.

Most the skin that isn't covered in scales is covered in short rough fur, with patches of longer fur in places, this fur is generally dark gray or dark brown, though they come in a variety of natural colors and shades. They have a collar of fluffy fur around their neck, which is generally either gray or brown.

Nichtendrakk have large pale eyes, and rather poor eyesight, relying on their finely honed other senses, in particular their acute hearing, to navigate. They have wide ravenous mouths filled with pointed teeth, a few of which are particularly prominent and utilized in feeding on creature's blood.

Nichtendrakk are consummate hunters of the night. Sleeping during the day unless roused by some cause, they take wing in the midnight air swooping down against lesser creatures that might suppose themselves midnight predators, and unsuspecting nighttime strollers. Nichtendrakk tend to ornery and posses a malicious streak, which compels them to toy with prey before finally killing it.

Outside of this nichtendrakk have a reputation for stubborn obstinance, to the unending aggravation of their would-be handlers. Nichtendrakk mate for life and have family units comparable to the vampwelf they are distantly related to, and tend to be similarly aggressive to perceived threats towards them.

Towards the vampwelf, nichtendrakk are a fair degree more comfortable and accommodating, owed to several millennia of domestication and a genetic relation that makes them "understand each other" far more than other species might do.

Drakken Red: Noted for it's striking combination of crimson scales and black fur. The drakken red is a breed rumored to have been bred by Draculas von Drakken himself from his personal mount. They are larger and more aggressive than the common variety and hold themselves with a domineering countenance only surpassed by the Von Drakkens themselves.

Nighthaunter: A horror only known about in legends. They are described as being pure black, save for their eyes, which glimmer with a pale blue light. Swift and lean, they are further described, they are monstrous creatures which strike in a blur, leaving only desiccated husks of victims in their wake.

• Nichtendrakk are ornery and aggressive towards strangers, unless those strangers exploit the nichtendrakk's one weakness: Scratches behind the ear. This frequently turns the fearsome demons into happy little pups. Mind, getting that close to a nichtendrakk that doesn't like you is a perilous proposition, so one should exercise caution.

• Nichtendrakk used to be all but completely unseen outside of Transylvaar, as the Von Drakkens enforced a ban on their export. But as it happened, a vampwelf who established holdings on other worlds would bring their beloved companions, and then smuggle in mates for them, leading to populations of nichtendrakks spreading out, much to the chagrin of the Von Drakkens. 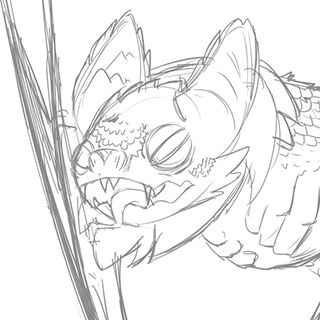 -Back to Fauna Menu-
< Mycat
Notzel >