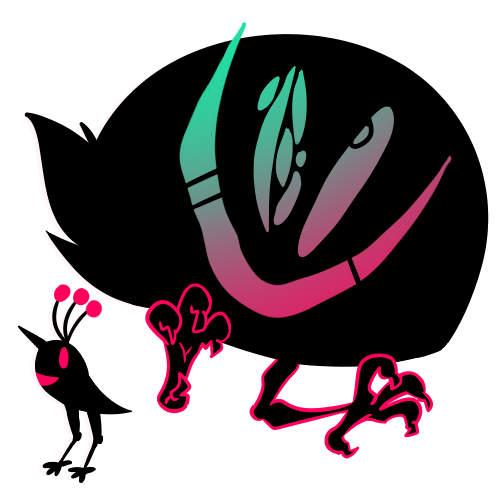 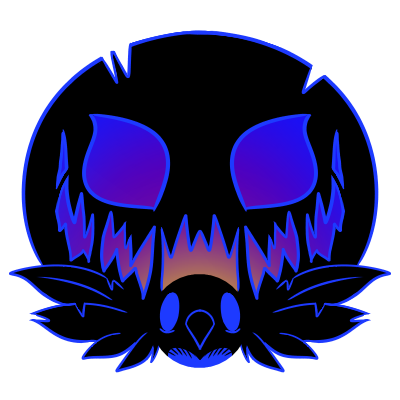 Attack Method: Monikes act defensively. When threatened, their feathers fan out like a shield to reveal a large face which can be used for intimidation and confusion. Their dense feathers are able to deflect projectiles.

When a monike's feathers are at rest, this capture creature resembles a teardrop-shaped bird with narrow legs. Their eyes are small and usually analogous with their secondary accent color, which will appear as a patch on their neck and a crown of feathers on their head. A monike's primary color is always black and able to absorb over 90% of surrounding light, giving the monike the ability to blend seamlessly into the dark. During daytime, it is impossible to see the highlights or shadows of these feathers. This may also make monikes appear like a walking black hole. But fret not; after extensive testing, the monike's gravitational pull has been reported as, "ordinary" and, "remarkably unlike a black hole."

If one pets a monike, they'll notice how incredibly dense this bird feels. This is because thousands of firm feathers are tightly packed together. An individual feather is sturdy enough to be used as a dart with little to no damage to the shaft.

When a monike's feathers are fanned out, the original shape of the bird disappears completely. What remains is a shield-like semi-circle, or similar form, with an iridescent face. The face pattern is usually something scary in the same way that a festive pumpkin might be. These face patterns are large and reflective enough to be seen from far away.

During an encounter, monikes are not considered physical threats. Instead, the danger lies in the opponent's psyche. They are defensive capture creatures that specialize in survival, support, and status effects. Given the right training, a fanned monike is able to mesmerize through dance, similar to a hypnotist's watch. These dances are given such names as "scary face," "glare," and "confusion" and either gives the monike and its owner enough time to escape or incapacitates the target long enough for another capture creature to take charge and attack.

Inexperienced monikes are only able to confuse targets with their dance, making them more likely to attack themselves than the monike or their owner. Some can induce queasiness, fluster, or anger the target to put them into a more unstable state, reducing accuracy. More expertly trained monikes may have the ability to paralyze attackers or put them to sleep. If teamed, some dances can be used to sooth and increase the prowess of their partner. All monikes, no matter their age or training, can fan their feathers for protection or compress their feathers for evasiveness.

Outside of battle, Monikes are capture creatures designed for the N-class. These birds will protect their notail like a loyal friend. The owner may even find themself affected by the monike's status effects in favorable ways, causing dreams of bliss. This stage sets the foundation for a false sense of security.

The notail will put faith in the monike to continue protecting them, but by being in close proximity to it, their dreams will begin turning into nightmares. Status effectiveness will build, and the face of the monike will appear more and more frequently as a symbol of unease in the notail's mind. Nightmares will be themed after transgressions of the limbo gods and imminent harm destined to befall the trainee. As the dreams get increasingly violent, the notail will nurture a severe distaste for the monike. At this point there are usually two conclusions the notail may come to:

1: They work up a meditative tolerance to the nightmares and can handle the hate by directing it towards the gods instead of themselves. They are stimulated by these omens, fueled to despise. These notails practice enough willpower and self-control to be effective religious therapists.

2: The notail separates from the monike. Now abandoned, the monike will begin a stage known as 'haunting.' The notail will only encounter their monike during the night, spying it in the distance before it vanishes again. The notail may feel alone, but they never will be. The monike will assure their nightmares continue, and that their owner never forgets. Over time, the notail will gain an understanding of the dangers of what you can't see, and what you can't trust. This may be as far as the trainee gets, but some have been fired up enough to hunt their monike actively. If the trainee is successful in hunting their monike, they can pluck the feathers from its body. Most often these feathers are woven into garments. These are a trophy and offense to the life of the monike and what it represented.

Superb Monike: These monikes lack the ability to induce nightmares but are less sturdy. Their shield markings also come in a greater variety of patterns. Most superb monikes are kept as pets or are found lazing around churches like chickens on a farm.

Mesmeric: Monikes are able to steer attention towards their 'face' and dance in a way that may cause several status effects. These dances can be thought of as a lesser hypnosis.

• Monikes are a recently engineered capture creature. The pigment of their black feathers has been copyrighted and dubbed 'vanishblack.'

• Fanned monikes have an awful habit of staring. Seeing a face in the dark has given more than a few birdwatchers secondhand nightmares.

• Most monikes are fans of fruit. Particularly, fermented fruit works well as bait.