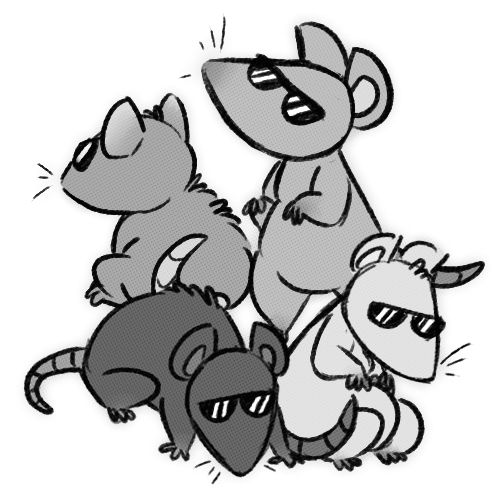 “Hey, amigo, have I met you before? You look awfully familiar...” — A confused tourist

Attack Method: Nonny mice prioritize fleeing over fighting, but if pressed they will attempt to swarm the target en masse, biting and clawing at random.

[Ventriloquism] Neutral trait
This character can throw their voice. Others will hear the voice come from the direction of the speaker's choosing.
[Sneaky] Positive trait
This character is skilled at performing tasks without being seen or heard. They are good at avoiding detection and are much less likely to be caught doing things without permission.
[Social Escape] Negative trait
If a situation becomes too stressful for this character, they will impulsively attempt to escape it through whatever means possible. This usually occurs suddenly and unexpectedly during conversations or other such social events and usually end in negative reactions from the other party.

Nonny mice have no formal religious practices, but many nons honor the Divided in the privacy of their own homes.

Nonny mice are bipedal rodents with grey to black fur, small, rounded ears, and short, skinny tails. Often they are a solid color, but patterns are not unheard of, generally being very simple and often localized to the face. Patterns, when they occur, can vary between groups but all members of a group will have the same pattern.

Nonny mice reproduce through parthenogenesis; all individuals from a single group are genetic clones of one another. Nons produce 5-7 children per birth.

An embodiment of anonymity and literal mob rule, everything in nonny mouse society is accomplished through large crowds of individuals performing tasks anonymously. It is incredibly difficult to track any one individual as they continuously move, blending in with the rest of the crowd.

Jobs are not held by any singular individual, but rather filled on a rotating basis by those with the required skills. This rotating style of jobs means that each individual non picks up a decent variety of skills throughout their life; nons generally are very inquisitive and learn quickly.

A typical nonny mouse requires being in a "crowd" of at least five others to stay in good health; a non that believes they are capable of being singled out as an individual in a public space will become extremely stressed and, if stuck in such a situation for too long, can even die.

It is not unusual for people to hear about nons and come to the conclusion that they are some sort of hivemind, but this is false. Nonny mice are, indeed, individuals with their own thoughts and desires, they simply have an inborn aversion to displaying such things in public. It is only in the privacy of their own home where nons will allow others to see them for who they really are.

There is not much to say about non history , mostly because records indicate it has changed very little over the course of their existence. There are no mentions of any tumultuous events, good or bad, no wars, ages of exploration, renaissances, invasions... nothing. The singular most important event in non history appears to be the introduction of space travel, brought by a ship full of particularly intrepid (or particularly foolhardy) tourists.

Loner: Loners are not a true subspecies, but are rare individuals who shun anonymity, preferring instead to make a name for themselves, even if just a modest one. These are the nonny mice you will find working on ship crews and traveling to other planets. Typical nons do not view loners as nons, but as a separate species entirely. Loners are allowed to move through non cities and interact with crowds as they please, but they are not considered citizens and thus cannot participate in non society.

Shut-in: A non that becomes distinguishable as an individual through injury or similar means retreats to their home, never to be seen by the outside world again. Shut-ins are cared for by friends and loved ones, still valued for what they can contribute to private social life, and are free to spend the rest of their days as they see fit. Blog writing is a popular shut-in pastime, and it is not uncommon for them to gain a sizable digital following of typical nons and tweeps.

Ventriloquism: Nonny mice are extremely talented ventriloquists, capable of speaking with minimal mouth movement and throwing their voices with every word. In a crowd, this serves to conceal who a given speaker actually is.

• Nonny mice generally have a conflicting opinion of notails, approving whole-heartedly of their use of masks in public but put off by the fact that each individual's mask is customized. "What is the point, then?" and "Why even bother?" are common non sentiments to this revelation.