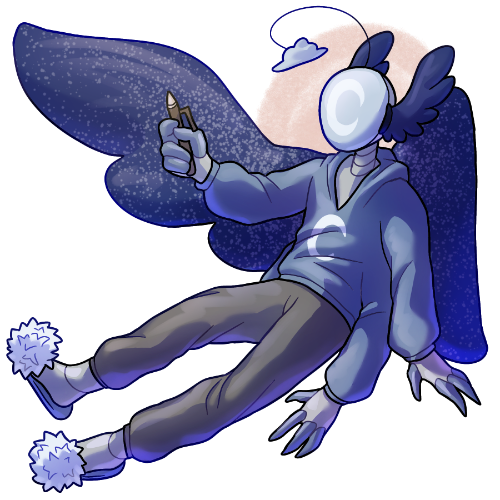 “Y'know, I'm not even that fond of concerts or anything, but it was just nice. Like, I felt safe, which is WEIRD, since I was, y'know, in the middle of a literal fiery warzone??” — A lucky survivor of a clockwork outbreak

Job: Secretary and Companion
Likes: Callisto, Chitchat, Needlepoint, Nightime
Dislikes: Confrontation, Fire, Idolization
Notable contributions: Acts as both a secretary to Callisto, and a source of comfort to those affected by clockwork attacks.

[Calming Presence] Positive trait
Smells like lavender...
[Social] Positive trait
Hey there! I'd say it's a lovely day, but there's clockwork blood on the ground.
[Charitable] Neutral trait
Oh, are you alright? Sit down, I've got something here to help.
[Craftsman] Neutral trait
Everyone's got their hobbies!
[Semi-Famous] Neutral trait
Riding on the coattails of a clockwork fighter has its benefits.
[Clingy] Negative trait
Safety comes in numbers, even if the number is two.
[Vulnerable] Negative trait
The needle is far less mighty than the sword.
[Verdant Song] Ability trait
Rest your weary head, you're safe now.

Hally is quite typical for his line, being a mostly baby blue eros at a height of about 5'3". He has two pairs of arms, and one pair of wings. Though, for wings, they're more similar to a pair of starry-patterned, lavender-scented blankets than actual feathery wings.

Hally has a rather unique facial screen, with it being a simple moon icon denoting his mood. This is done with the rise and fall of clouds, or addition of rain and thunder. This unique screen is accompanied with two simple wing-esque decorations on either side of his head.

In a stark contrast to his sister unit, Callisto, Hally seems to prefer entirely informal fashion choices. He's most commonly seen in some sort of comfy, "stay-at-home" attire, such as sweatpants paired with a simple graphic tee. His style has sometimes been compared to something one would see at a bed-and-breakfast, though this particular comment seems to particularly get under the Eros unit's metaphorical skin.

Even if Hally was not made with the purpose of being a companion unit to the more notable clockwork huntress, it's strange how well the two seem to work together. Contrasting the Artemis unit's stoic and antisocial nature, Hally is polite, outgoing, and takes much more initiative in starting conversations.

This sociability can be seen the most in the role he takes(essentially the same role Callisto's original brother unit) of comforting/guiding survivors of clockwork strains. As reported by the few survivors who made themselves available for interview, Hally is particularly good at what he does. The Eros is often seen trying to direct these individuals towards support groups, or shelters for those who lost their homes during outbreaks.

Though, with the compliments to his sister unit's personality also come the downsides. It's incredibly rare to spot Hally away from Callisto, and even rarer to spot him away from Callisto and not in some state of panic.

It has also been noted that the Eros unit seems to have quite a negative opinion on his newfound fame, and actively avoids any sort of spotlight, be it through interviews or even simple praise for his actions. While he doesn't seem to have any intentions of leaving his current line of work, it's been noted that his presence outside of his rescue and relief efforts has declined over the years.

Although Hally is most known for his assistance in Callisto's efforts against clockwork strains, he also is quite talented with needlework. He seems to be the most fond of embroidery, but it's unknown if there's any type of fabric craft he hasn't at least attempted.

Not much is known about Hally's life before his hero-esque partnership with Callisto. What can be speculated from the already sparse interviews is that Callisto rescued him from some clockwork outbreak, and Hally stuck around after the incident. Though, even this is but speculation. The only proof of this is from Hally himself, being his statement of "I'm lucky to be alive, and it's all thanks to Callisto."

There are other theories as to why Hally works alongside Callisto, such as some believing it to have been out of the Eros unit's concern for her.(Those in belief of this theory claim its lack of confirmation to be to save face for the mostly independent and stoic clockwork huntress.)

Sanctuary's Song: Those who have been rescued by this AI duo report feeling immediately calmed when around Hally. Even in the case of those without a sense of smell, all reported a feeling of comfort due to his quiet singing. The song most claim to have heard is a lullaby of some sorts.

• Despite not engaging in the front line efforts of clockwork hunting, Hally has worked up a reputation among those Callisto has saved.

• A few pieces of needlework done by Hally are floating around the universe. Against his spoken wishes, they're treated as collector's items due to his secondhand fame.