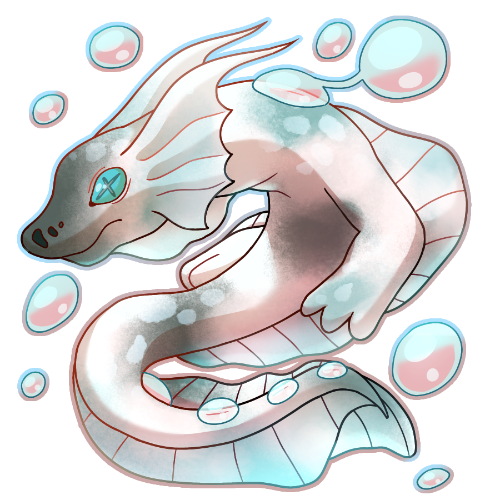 “Notails are bred for land, but that doesn't mean they can't adapt to water! A fluskal is essential to using the Wood's lakes and rivers to their fullest potential. If you don't know how to swim, good luck!” — Notail's Guide to Picking a Starter

Attack Method: Thrashes around and attempts to bite the opponent.

Fluskals are given to notail children as fairly small, fish-like amphibians with two weak legs, a long, flexible, and finned tail, and a series of gas bubbles rising from its slimy, smooth-skinned back. These bubbles grow in a straight line along the fluskal's spine, specifically from small slits, and contain breathable air in them. When placed underwater, the fully-grown bubbles are able to detach themselves from the fluskal's back and are large enough to fit around a notail's head. The bubbles' viscous slime membrane keep them intact when being worn underwater by a notail, allowing them to breathe underwater for an hour at a time, acting similarly to diving gear with the oxygen being contained directly in the helmet. If the fluskal is above water when it releases its bubble, it almost always pops and cannot be saved for later.

A fluskal's colors can vary, but they are usually a mottled mix of cool colors, usually aquamarine, and white and black. Its slime is clear. They are a weak and noncombative creature, and no notail should expect a living weapon when gaining a fluskal unless they learn of the flammable properties of their dried slime. It contains a texture similar to chewed gum, but is extremely flammable, making that alone useful for a variety of purposes.

While fluskals are normally a foot and a half long when given to notail children as capture creatures, they do not stop growing until death; most elderly fluskals are around five feet long. Their increased size allows them to create larger, more numerous oxygen-filled bubbles for people to dive with. Fluskals, when given to notail children, are able to create bubbles that have about an hours' worth of oxygen in them, and release another from their back every 40 minutes.

Fluskals breathe air but are unable to survive without being in a body of water for too long as their bodies begin to rapidly dry out. They are far better at swimming than walking, only able to weakly drag their bodies across the ground when moving on land. Any notail child should be sure to have a solid understanding of where nearby creeks and lakes are, or have a container of water they can keep the fluskal in, when traveling with one.

The fluskal is a docile animal. Solitary unless trying to mate, the only exception is that they consistently follow and show signs of trust towards those that feed it. If not given food for a certain number of days, the fluskal will begin to avoid its owner and possibly even try to escape if approached.

It creates its bubbles passively and its natural purpose is to keep its potential young from drowning, as fluskal young are often raised on the bottoms of fairly deep freshwater bodies, too weak to swim to the surface and get air themselves. As its owners are also things a fluskal wants to protect, it will place new oxygen bubbles around their heads if their bond is strong enough. They do not display any affection outside of this, nor do they make any noise.

Not a predator, fluskals spend most of their time grazing freshwater plants and occasionally scavenging for deceased fish and other small animals. If a notail can consistently provide these to its fluskal, it will willingly allow them to traverse underwater for long periods of time, the true value of the fauna.

Fluskals are often given to E, Y, I, and K-class children to acquaint themselves with the underwater world they might have to traverse as adults for their future jobs. Being able to spend almost their whole waking time in the Woods underwater if they choose, the children gain access to exclusively aquatic items, in-depth knowledge about the wildlife, and familiarity with how to survive in a watery environment that children without fluskals would not ordinarily have access to. Others appreciate it for the unique shelter the water can provide. While many notail children with fluskals can be found with bases by lakes or ponds, having to move deeper into the Woods each year and the journey involved in that keeps them from being completely isolated from the land adventure typically associated with the Woods.

Once graduating from the forest, most notails give up their fluskals, having no need for them now that they have no real reason to live underwater. The government and private companies associated with underwater exploration and species relations are the most common buyers and use fluskals as replacements for ordinarily expensive scuba equipment. The notails that used fluskals in their childhood are often hired by these groups for their experience and usually go on to be efficient employees.

Ibellum: The extremophile archaebacteria that is normally only able to exist and grow on ibelluts has also been found to survive on this fluskal subspecies. They are less valued for their bubbles but more for their slime, which is harvested to provide temperature resistances to the items it is applied to. They exhibit little differences in appearance aside from that their slime changes to red or blue depending on the temperature.

Tank: Not quite a biomachine but approaching the mindlessness associated with them, tank fluskals, named after oxygen tanks, consistently are more than twice the length and possess four times the bubble-making slits than a normal fluskal the same age as it. They are often kept in tight pens to mass-produce scuba bubbles and can survive in seawater.

Holding Your Breath: Fluskals periodically release large bubbles filled with breathable air, held together with a sturdy slime membrane, from their backs. A species can wear these bubbles and traverse the upper levels of aquatic environments for several hours without needing to go to the surface to breathe.

• Fluskal bubbles can combine with others to create larger ones. This is usually done for larger species, long-term expeditions, or anyone traveling in a group.

• Items such as handheld electronics are sometimes stuck inside their own scuba bubble to keep them dry underwater. No item except heavy ones fall through the membrane.