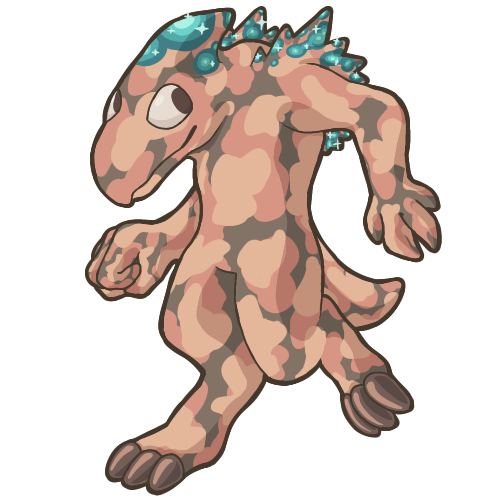 “The first time I met a palonava, I thought that it was just a custom AI or the sort talking to me. I didn't realize until after a person stepped out of that shell that someone could deny a simple claim so insistently.” — A robot enthusiast

Attack Method: Strikes quickly with sharp claws or headbutts with solid crests. Attacks as a group if possible.

[Honest] Neutral trait
This character cannot bring themselves to mislead others, and will try not to keep secrets from fellow crew. Most will appreciate their honesty, but it can anger others or even land them in trouble if they aren't careful.
[Protective] Positive trait
This character is likely to know when things are going wrong with anyone they're protecting / anyone on their team. A protective character will defend them whenever possible. Endurance obtains a slight raise when the protective trait is active.
[Overconfident] Negative trait
This character is too confident in their abilities and is not realistic about how dangerous or challenging something may be. They may take on tasks they cannot do, or put themselves or their team in dangerous situations because they think they can handle it.

Important ancestors are revered by their living family members as powerful spirits and guardians.

The palonava appear as bipedal reptilitans with a slightly hunched-over stance. Their scales are smooth but durable, and the patterns of their scales are extremely mottled and tend to range from brown to light pink colors. Occasionally, a palonava can be found with patches of dark red scales, or warm blues or blacks in even rarer instances.

Their tails are short and drape down to about halfway down their legs, and their hands possess two fingers and thumbs each, with the thumbs being situated on both sides of each hand. The feet of a palonava possesses three sharply clawed toes, and their legs are built for short bursts of speed.

Palonava have large, bony crests over their heads, and spiked plates over their shoulders. These are both the same color pattern as the rest of the palonava's skin, and tend to be larger in the firstborn of a family.

Nearly all palonava have evolved to be able to consume their homeplanet's abundant minerals to help supplement its scarce organic resources. Depending on the amounts of minerals consumed, crystal formations can begin appearing on or around a palonava's crests and shoulder-plates, and can sometimes grow to extremely large sizes. Most palonavas sport small crystal formations at the least, but these formations can also stretch to far past the normal areas in rare occasions.

The senses of a palonava include exceptionally sharp sight when holding things up close, but struggle to clearly see things at a distance. While many simply ignore this problem, which they view to be minor, an equally-sized group chooses to solve it with goggles, or less popular choices such as glasses or very rarely, implants.

Aside from eyewear to help alleviate nearsightedness, palonavas do not commonly wear any clothing, but some may choose to wear some over their chests, and rarely over their legs. To get around their large shoulder plates, they use apron-like wear instead of the typical shirt. They might also sport minor accessories like scarves, bows, hats, and more, although those are more uncommon.

Palonavas, as a whole, are tenacious and hardworking. Their work ethic involves putting great amounts of effort into a job one can be passionate about, and laziness is greatly scorned by palonavan society. Lounging around is only reserved for those who had truly earned it. The palonava are also blunt towards all people, and are not at all afraid to point out flaws in the system or in other individuals. Dancing around topics is seen as a waste of time to them, and all personal problems between two palonavas will end quickly, no matter how much one's feelings are hurt in the process.

Palonavas are highly communal, and take great pride in maintaining their family units, consisting of close family and sometimes even members far beyond that reach. The size of a palonavan unit can vary from just 10-15 to as many as thousands. While close bonds are highly encouraged, sometimes families are only linked together by territory and economic/political power when growing to an exceptionally large size.

Palonavas who wish to keep their family unit small will often force more distant relatives out of their homes, but not without giving them enough resources to survive and successfully build their own family unit in the future. In the far more common, smaller palonavan families, most members take the same occupation and run jobs or businesses as one group. Small shops run by palonavan parents and their children are the norm.

A palonava's social circle is not just limited to its family, and can occasionally involve members from other familial groups or even members of another species. Although they treat their friends more formally, they are also more likely to engage in light-hearted arguments with their friends, promoting focused communication that builds off of pointing out another person's flaws.

The vast amount of minerals on the palonavan homeworld has made occupations relating to mining to be extremely common, and their resources led to creation of large and powerful mechs. Making mechs in particular hold a staple in palonavan society as the thing that most palonava will enjoy as children or as hobbies for adults, with many enjoying it so much that they decide to take it on as a career. Mechs are incorporated into work and daily life in a variety of tasks including (but not limited to) heavy-duty mining, waiting tables, and even transportation.

The mechs used by the palonava are large enough to fit one inside, and are piloted solely by its commander. All palonavan tech requires the complete attention of its captain and does not automate anything, as they view the use of automation as laziness. As such, the palonava scorn the use of AIs in any application, calling it the easy way out of many topics. When confronted with an AI, most pass them off as being unreliable or unworthy of interacting with palonavan society. Old superstitions also contribute to this view by stating that all life must be made naturally, and that AIs defy said rule.

Their view of other offworld tech, even if not including artificial intelligence, is not entirely welcoming as they view their hard-earned mechs and other technology to be far superior. Foreign technology will often be supplemented for palonavan tech simply because they view theirs to be better, or because it has more heart and communal appreciation behind its creation.

Palonava society as a whole is mostly peaceful, with almost all wars and scuffles involving a handful of small family units and nothing more. Governments are formed mostly by groups of nearby (and often larger) family units choosing officials to regulate relevant matters in an area, and most palonavan councils tend to be rather small.

Leaving their homeworld is rare for a palonava, as they rarely abandon their family, and going into space otherwise would involve taking the whole pack with them. Offworld, they still retain an adherence to their families, though the fluidity of life in space often weakens these bonds and sometimes completely severs them. A palonava living individually is much rarer on their homeworld, and often faces social pressures as a consequence for not having a group they can readily turn to.

The development of palonavan society began with the striking of dirt. Once realizing the functional use of the many gemstones they had found from burrowing out their homes, society quickly adapted to many palonavas taking on jobs relating to the processing of these gems into valuable technology.

Palonavas would create large mechs to help them complete their jobs, and as the use and local creation of them became more mainsteam, society and mechanical prowess developed at a rapid rate.

The growth of their population led to a scarcity of food on a planet that already started with little. Palonavas would try consuming their minerals to survive- a process that quickly evolved to be successful with large amounts of the population.

With their population in check and technology still quickly developing, the palonava advanced towards rudimentary spaceflight and manned explorations around their solar system. Though they had not yet developed FTL travel, their efforts were noticed by the notails, who quickly spread to take control of their new find.

In order to be integrated into interstellar society and become a protected species, the palonava had and still continue to hand over their valuable minerals and mechs as payment. Several mines on their homeworld have also traded ownership to the notails, though the families who work under them are not treated positively among palonavan society.

Most branches of palonava life remain on their homeworld, but increasing numbers have been taking to the stars since their universal integration.

Nesatara is an extremely arid planet consisting of mostly dry prairies and extremely large plateaus. Most palonavan homes are built as winding tunnels in the plateaus to escape the planet's high temperatures. Organic resources are scarce, and most life can be found in small burrows or tunnel systems.

Nesatara also boasts extremely large amounts of minerals under its surface, versatile for both its beauty and functionality. Several large mines are stationed around the less populated areas of the planet.

Crystals: An uncommon mutation in certain palonavan families has led to a palonava's entire body being encased in crystal formations, regardless of how much minerals the individual consumes or not. This mutation also has reported side effects of decreased social behaviour, improved eyesight, and nocturnal sleeping patterns.

Crystal Crunching: Palonavas can consume raw or refined minerals as supplementary rations. They cannot survive solely off of this diet, but will occasionally grow mineral formations around their crest and shoulders whenever they do.

• Large family units are extremely rare, to the point where the largest in palonavan society does not exceed 15,000 people.

• Despite the palonavas' dislike for AIs, a small number of their mechs are modeled after pre-existing AI lines. When pressed for an explanation, the palonavas simply replied that they didn't want to let good designs go to waste on useless technology.

• Reports of robots visiting the palonavan homeworld and then being turned to scrap for mechs have surfaced among various palonavan families. As such, there are certain areas of their homeworld that robots are advised to steer clear of. 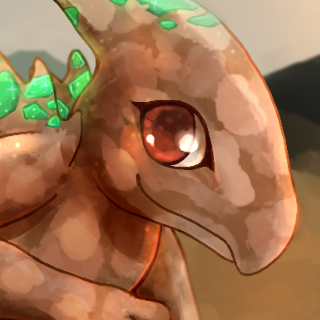