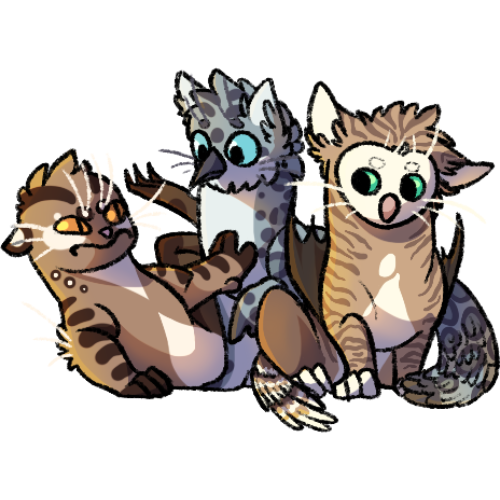 “Whoa, look at these cute little kits! They're so friendly.” — An unexpecting aftik stumbling upon a dweyla nest

Attack Method: Dweyla will give off warning screeches before diving towards the target, maybe giving a few scratches. A dweyla will stand tall with wings outstretched to hide its body or young upon a nest or when cornered. If pursued further, they will launch, using their talons and fangs and will fight to the death.

Dwelya is a small quadruped creature with cat, bat, and owl-like features. They have long rounded ears and a broad face with a toothed beak,also having small paws with tiny thumbs able to help grasp.The back legs are also peach fuzzed with taloned legs and a feathered tail for guiding themselves.

Dwelya parents will both stay to raise their young together for a few months until they're ready to go off on their own. They also pair for life,though,upon the death of a mate,the female will move on,with the male only finding a mate after a few years. The young kits will generally stick around their parent's territory before they move on to their own territories after a year or so although a dwelya will usually always come and help their young no matter their age if they need it.

While aggressive towards strangers and intruders, they are loving creatures. A young dwelya, if found early enough, can be tamed very easily. Having some prey or meat, in general, is enough to deter them from aggression as they are treat incentive creatures. They can learn tricks reasonably fast and quickly. Eager to please as long as there's some food in their face. Though it's when a trainer runs out of food that this becomes a problem. The dwelya will still respond but will do the wrong tricks or commands on purpose. Sometimes they just straight out ignore them and lay in place. They can do simple tricks like sit, stay, paw to even more complex routines like gliding in a circle through a trainer's arms. It makes for good street performance or even a simple show if the creature is fully trained. Despite it all, a dwelya will always remain loyal to their owner or trainer should they have been nice to them in their time of being together. It will begrudgingly ignore the treatless times and will fight and stay at their side until their last breath. They are fiercely loyal creatures. This does mean there have been cases where dwelya turned on abusive owners. If not adequately equipped to fend off, it can turn severe quickly. Even a pampered dwelya can still take to the wilds and survive. They simply prefer the life of free food and housing if raised that way.

While dwelya were found to be very good for trick shows, they were also helpful for search and rescue and sending messages. With their high sense of smell, hearing, and sight, they could scout out people gone missing or in a disaster situation. They could glide ahead and alert the trainers where they located someone.Though the tests for a dwelya to be for search and rescue service are very rigorous. They can't have any over aggressive fauna attack any new stranger and thus are picked more so for friendly demeanor and high smarts. Meanwhile, dwelya can be used for simple messaging. More so sending messages within a large building. They are not recommended to be sent outside with a letter, especially if they don't know the route or receiver. It is not the most helpful skill they have over tricks and search and rescue.

Common dwelya: What is discussed in this entry. They are usually wild, but breeders are the best way to get a more tame and friendly one.

Aquatic polar dwelya: These dwelya are found in icy and harsh conditions.They come up on land to nest and carry out daily activities though,these creatures can hold their breath for minutes at a time and are also excellent swimmers. These fauna don't do well outside of cold temperatures so are not as domesticated as their common cousins. It has been noted they are inquisitive and friendly creatures. They were found to rub against visitors; they show no signs of aggression or harm towards them or their families. Polar dwelya also have only one egg at a time, two being uncommon and three very rare. The fur and feathers are also very thick and water-resistant, keeping them warm. Lacking wings like their common cousins, they have flippers and can be seen shooting out of the water to help in hunts.

Swamp wetland dwelya: It's unknown exactly how close these guys are related to their common and polar cousins.For one these guys have no wings and instead have grown long strong frog-like legs.They also have a long tongue to shoot out and catch prey.These guys even have an air sac on their chest to help them croak and attract mates.They have slicked back yet slimy fur and body with a long tadpole like tail.For more defense they also have a few quills along their body to deter predators.The swamp dwelya are highly aggressive surpassing the common dwelya,attacking anyone and anything that dare comes close to its water source.They have been known to stalk under the water by the shore and leap out to attack and bite trespassers. Their amphibian-like skin means the majority of their life revolves around water,even laying eggs and raising young there too.

• With all the eating and treat demands, one would think a dwelya would be getting overweight, but this is far from it. Their bodies work so fast they need to eat lots of food. This isn't to say they aren't acting it up for a bit of extra, though.

• While a dwelya should always be supervised when around anyone young, they have been known to be very protective around them. Even around other younger, weaker fauna that may be considered prey in the wild, if they were raised together or are of the owner's protection, they will stick up for them and defend themselves from any attacks,even screeching and alerting the owners or deterring suspects. While they may act like they don't care, they do have some soft spots.

• In rare cases, there are dweyla that are born with all feathers or all fur and no feathers or even missing their wings that help them glide. While it does indeed make life in the wild harder, they are still accepted by their families. Though breeders rave for these little guys, and they can fetch a high price. 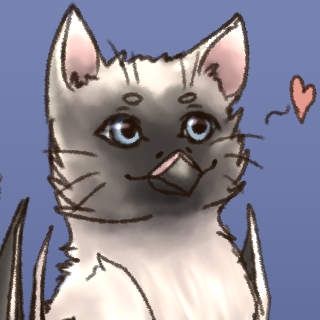