Common Jobs: Who needs to work when you have legs like THESE?, Unkillable meat shields, Fashion Models?
Likes: Themselves
Dislikes: Everything else

[Drug-resistant] Neutral trait
This character's body is able to filter substances extremely well. All substances, recreational, medicinal, and lethal, will need to be administered in a larger quantity for them to take any effect. There may be a few exceptions.
[Schadenfreude] Positive trait
This character enjoys it when bad things happen to other people, and will gain a boost in morale from witnessing it. They don't try to make this happen themselves and deaths will still upset them.
[Narcissist] Negative trait
This character is utterly in love with themselves and will make sure that everyone knows about it. This character will commonly move conversations to be centered around them which can mean that the conversation completely misses its point or everyone else in the conversation become increasingly agitated.

The gorgorse are godless heathens and worship only their own reflection.

The gorgorse is a very bizarre and hideous creature. Standing somewhere between 6 and 7 feet in height the gorgorse has features similar to that of a horse and a seahorse, prominently the headshape of a gorgorse is horse-like in appearance with a number of exposed blunt teeth, a fin running up the center of the head, and two eyes jutting out on stalks on either side.

The gorgorse walk on two double jointed legs that end in hooves, and have a very long thick tail that they will oftentimes adorn with various bits of jewelry and other decorations. Additionally the gorgorse is commonly adorned in a number of skin markings at various locations of the body that accentuate their already sickeningly brightly colored skin.

To call the gorgorse narcissistic or self centered would be far to simple a description for such an absolute garbage fire of a being. It is by no means an over-exaggeration to describe the gorgorse as "the worse species that has ever been discovered" as the majority of the universe, notails included, will likely agree with that sentiment.

The gorgorse have only one concern in their lives; themselves, to a gorgorse their own "beauty" is at the absolute top of any list of concerns: are you bleeding out on the floor? A gorgorse will help you up..after fixing their makeup, having a snack, and getting just the perfect angle of themselves doing the deed to post on their social media account. Once that photo is posted though you're on your own. Have you had a loved one die a terrible death? The gorgorse will send their condolences....along with a link to the new mass level marketing scam they're trying to push. All of your problems can be solved with Milk of Gorg! Just don't ask where it comes from.

Simply put, the gorgorse were a mistake and should never have been created. Blame whatever limbo gods you want, no one will ever take the blame for these creatures existence.

No one knows where the gorgorse originated from and frankly no one wants to know. The first recorded encounter of a gorgorse was approximately four months before the death of popular social media service: Prune. A mass influx of gorgorse accounts and posts ultimately killed the servers of the service to the point that they could not be repaired proving ultimately that even that which isn't alive would rather be dead than deal with a gorgorse.

Unfortunately for the rest of the universe however the gorgorse are a heavily resilient species, being able to shrug off deadly poisons and drugs, bullet wounds, stab wounds, nearly any kind of wound really. Killing a gorgorse is in and of itself a feat worthy of heroic renown. For a brief period of time it was even considered cost effective to simply drop a gorgorse on a battlefield to bring a fight to a standstill....unfortunately the cost analysts forgot to take into account the massive morale drops that come with having to interact with such an awful creature.

The gorgorse homeplanet has been sectioned off from the rest of the universe for your own safety, yet somehow the gorgorse consistently manage to escape to roam the galaxy at large.

Irredeemably Terrible: The gorghorse are a blight on the universe at large and despised by everyone. They have few, if any, positive or neutral traits that aren't physically based. Instead they have mostly negative traits.

• A gorgorse once party crashed an O-class notail's party, the planet the party was hosted on was subsequently destroyed. This was widely regarded as a proper response to such an event.

• Anyone who likes the gorgorse is wrong.

• Not a day goes by that someone doesn't question this species' creation. 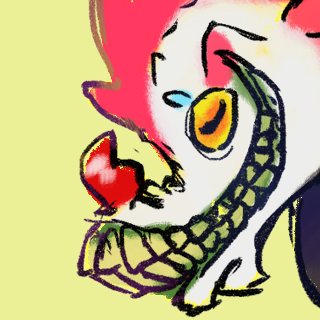