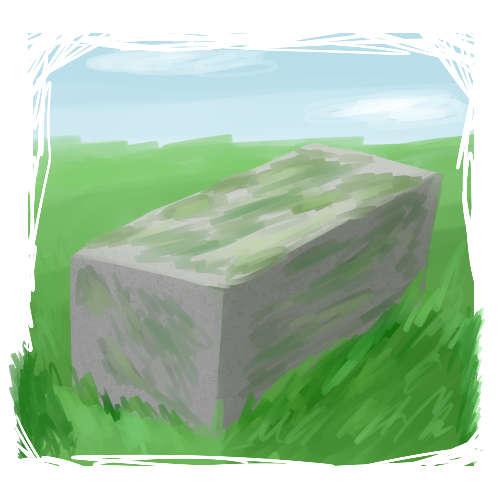 “Is... Is this thing actually alive?” — Scientist discovering yes, it is alive

Attack Method: Incapable of attack. May accidently cause choking if eaten.

Glunks resemble grayish blocks the size and shape of bricks coated in moss. The glunk is quite soft to the touch, and can slightly bend.

Glunks sustain themselves off of sunlight and ambient moisture. Glunks are capable of slowly moving along surfaces, but will rarely do so in their life. Even in mortal danger, the glunk will often just hold still. Whether this is because it knows it would just die anyways, or that it doesn't care is unknown. Given sufficient sunlight, the glunk will produce spores every 30 days. The exact amount of time depends on the quantity of sunlight, with more or less sunlight hastening or slowing the process.

Spores landing in viable areas will eventually grow into a small shrub that will produce a large quantity of tiny flowers. After pollination, the flowers will fruit in the form of a rectangular nut. The outer shell of these nuts is nutritious, and designed to goad entities into eating them.

After being passed, the inner shell will wait until it detects sunlight. In this state, the glunk is capable of waiting a very, very long time if needed. Once it detects sunlight, the nut will crack open to reveal the young glunk. Utilizing the sunshine, local humidity, and nearby detritus, the glunk will after one month reach full size and begin producing spores of its own.

Mossback: Glunks generate a slight electrical charge during the day. With the right equipment, one could charge small electronics.

• To this day, scientists are still baffled as to whether the glunk is a mammal, an insect, or some form of plant. They can agree it isn't a mineral though. Probably.

• Due to the glunks natural generation of electricity, some places uses them to power buildings These areas carefully manage the glunk population, keeping the "brick" glunk away from the "shrub" glunk, harvesting and containing spores, ensuring the spores are unable to breach the area, etc.

-Back to Fauna Menu-
< Gladstore
Goblin >