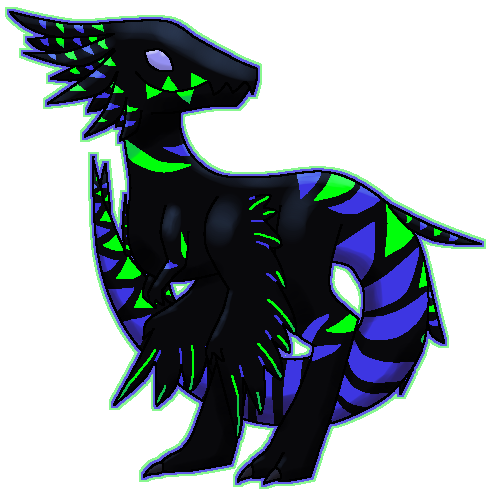 “One time a venopinae attacked me....but then paid for the hospital bills?” — An unfortunate victim that vaguely resembled prey

Attack Method: If provoked, they'll flare up their plumage, if the attacker doesn't heed their warning, they'll swing their tail to hit the attacker with their quills.

Although they don't have any gods of their own, if venopinae hear of a god in a way that gives them an impression the god would be social, they'll gladly accept this and tend to attempt to 'make contact' with the god every day, believing that even if the god doesn't reply at first, they'll eventually come out of their shell and gladly converse.

Standing on two sturdy legs, venopinae stand at around 6 and a half feet tall in their regular position, appearing even taller if they perk up. They have two sets of smaller limbs, one pair of small arms ending in two claws and a third claw functioning as a thumb, and a lower pair appearing more winglike with two small claws at the end. On their head they have a sharp beak with three tooth-like points near the front as well as feather-like quills, usually smoothed back unless provoked or surprised.

Along their tail are more of these quills, being smoothed back in the same way. These quills are used both as a defense mechanism and a hunting tactic, as they're coated with tiny spikes that inject a paralyzing venom into their attacker or prey. Despite these quills, their most noticeable feature are the bright patterns spread across their pitch black coat of feathers.

These markings are used to warn any assailants and mimic the many diverse kinds of flora on their homeworld, attracting unsuspecting prey. The specific colors that make up the patterns vary between individuals, but they'll always have two colors. Their eyes are completely a lighter shade of one of their pattern colors.

Venopinae's offspring hatch from eggs, which are a deep grey and if in a venopinae colony tend to be in large groups. Every venopinae cares for every child, and will never view 'their' child as their 'true' child unless there's no other children to take care of. Because of this, if one were to ask a venopinae raised with others who their parents were, they would point to everyone that aided in taking care of them, and they were informed who their genetic parent is, they wouldn't view that parent any higher than the others.

As an extremely social species, venopinae tend to startle most with their explosively friendly personality. They view socialization as the solution to any problem, since that's worked for them so far. Many of them have so many friends it's hard to count, yet they're somehow able to keep in touch with every single one of them. For a lot of them though, interacting with someone once in their entire life counts as being friends with them.

However, this can be a weakness of theirs, if anyone acts friendly towards them, whether genuine or not, they'll usually instantly completely trust this person, as lying and manipulation was something that would barely happen in venopinae society, and if it did, it wasn't registered as such.

As apex predators that entirely depend on reacting quickly upon their prey coming into view, they tend to act before they think, and will only fully register what they're doing after they do something, this is usually minor in most cases, but can be catastrophic in others. If they see something bright colored in a shop and they snatch it and sprint away before anyone can react, they'll realize just seconds later that they stole from a shop, and will continue to run, but this time specifically to get away from the people now coming after them.

When they get excited they tend to hop on alternating feet, and their quills seem to rattle against eachother, making a clattering noise that would be quite disturbing with no knowledge of a venopinae being nearby. This excitement can be caused by things as small as finding a shiny rock on the ground, or suddenly remembering their youngest brood's first catch.

Despite their seemingly primitive way of life, the venopinae had made it to space themselves, seeming to have used all materials they could have used for more advanced buildings and tools on space ships. Because of this, the first venopinae were discovered because of a travel ship getting a rather urgent message, which turned out to not be a death threat, but instead an excited, warm greeting. Venopinae don't keep any other kind of history, and upon being asked about it, they will think the asker meant HI-story, and began to list every greeting they've ever given or have been given. It's suggested to change the subject in order to stop the listing, as it can go on quite a while unchecked and venopinae get very excited about a subject change.

Stoklawnae: These venopinae have strayed from the usage of venom and mimicry and chosen instead the thrill of the hunt. Through this way of life they've grown longer sharper claws and instead of having wing-like arms they've instead gained a long tuft of feathers at their shoulder, aiding in their speed. Their markings are much less complex and instead of the usual bright plumage are dull shades of gray, the same for their eyes.

Polyprismatic: When asked what they called their much more colorful leaders, the venopinae replied The Polyprismatic. At first, people argued that separating the leaders into a subspecies was wrong, as they believed there weren't any physical differences besides the overwhelming amount of color. However, they discovered that even if polyprismatic started out as a stray mutation, the other venopinae's treatment towards them caused other mutations to pop up, although they can't simply be seen through the naked eye. Their pins have become vestigial, as their constant pampering caused them to have no need for natural defenses. As well as that, it seems a sense of calm and reason has become evolutionary, as even when a polyprismatic child was taken away from venopinae society as soon as they hatched, they acted in the same calculating way into adulthood.

Physically, instead of having only two non-black colors, the color black is nowhere to be seen on their feathers, having been completely overtaken by many many colors. The range of these colors can be simple, red to orange to yellow to green and so on, but they can also be sporadic, appearing more like if the word 'psychedelic' was made into a being. Their eyes are always a pitch black.

Venomous Quills: Dotted along the venopinae's tail and located behind their plumage are quills tipped with potent venom strong enough to send any average person without any kind of venom protection to a hospital. These quills flip up when the venopinae is startled or aggressive and give the appearance of a very angry cat.

• Venopinae are capable of standing up straight, but don't for long periods of time unless they want to fall down. While they're standing straight, their arms and wings tend to fold over their front.

• It is possible to surgically remove one's spines, but it's usually only done in certain situations as the absence of the spines will cause aching whenever their tail or plumage is moving. If they know they'll mostly be around other venopinae, they'll usually keep the spines since they have a natural resistance to the venom.

• Due to their hyper-social attitude, if any other person isn't in the mood to talk and turns away a venopinae, they'll instantly become upset or confused as they don't understand why someone wouldn't want to socialize. The longer a venopinae spends in space, the more understanding they become of this. 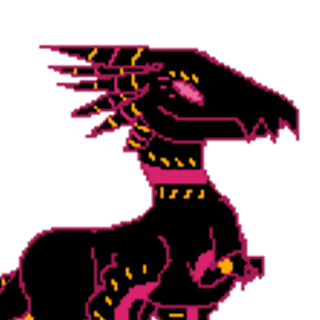 -Back to Species Menu-
< Vect
Venserra >