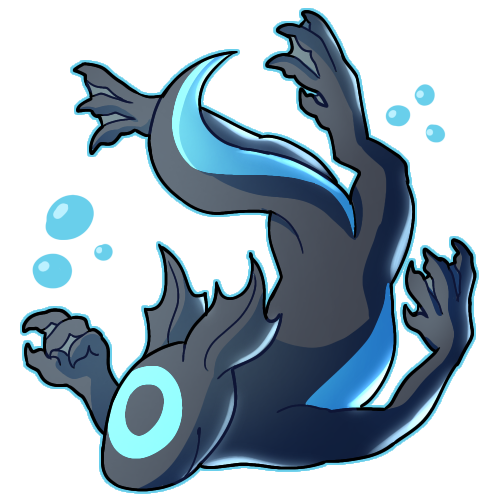 “I can't see at all!” — A urolind speaking to another species

Attack Method: Urolinds don't usually attack but when they do use scratches or bites to ward off the target.

Urolinds are dark grey bipedal amphibians with a bio-luminescent ring on their head and belly that glows with a bright neon color. Urolin's ears, hands, and feet are webbed, while their hands are made for latching on to even the slickest of rocks. Female urolinds can one to five eggs in a single clutch.

Urolinds are calm and peaceful. When angered they jump into a passive aggressive state before considering any type of physical attack. The species is skittish by nature and when confronted with a foe they believe is more powerful than them, will flee into the nearest body of water. Many urolinds note feeling uneasy when they can no longer smell a body of water nearby and prolonged removal from water causes anxiety, despair, and dry damaged skin. Part of the reason for this is that the species needs moist skin to breath, making dehydrating akin to a slow suffocation.

Urolinds traditionally hunt for their food by climbing up trees to catch and eat small fauna raw, but they will accept cooked food as well. Urolinds are far better hunters in the water, but many refuse to dive lower than 100 feet in their hunts, citing cultural reasons for their unwillingness.

There is little to no history known about this species, as all stories were passed verbally through the generations. Different groups of urolinds tell the same stories with wildly opposing outcomes, meaning no one source can be trusted. All that the stories share is that the deep waters of the planet contain something none of the living should ever come in contact with.

Haribana used to be an tropical planet filled with islands and many amazing tropical fruits until the geckrechaun came and overharvested it all. With less food on land many urolinds found themselves going against their traditions and heading father out into the oceans on their hunts.

Electric urolind: This subspecies of urolind is larger, more aggressive then but also dumber. The ring and belly are see-through and produce electricity instead of light. Electric urolinds have a strong sense of smell and can track their prey from 200 feet away. They can and will attack and eat other species without mercy unless they consider them a friend. Common urolinds once believed that electric subspecies was just a dangerous fauna and not a subspecies.

Depth urolind: Depth urolind are a recently discovered subspecies of urolind that can swim much deeper than other types. Depth urolind bodies are covered in bio-luminescent markings which are much bright. They are more smaller but more intelligent than a common urolind. Depth urolinds can swim to depths much deeper than normal this is as this subspecies scarcely shares info on their ventures into the deep. It appears that only in the last 100 years this species has breached on to land more often, stating a need to "escape the depth beast," a seemingly indescribably horror of the depths.

• It is rather obvious to many that the species are naturally meant for deep ocean and cave settings, causing many to ponder why most of the species has forced itself to live by the coastline. Little to no research has been done on the species homeworld, but the answer likely lies in the unusual amount of giant underwater cave systems on it.