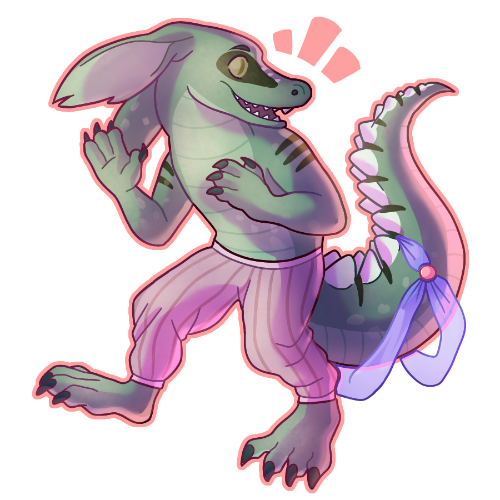 “I'm not sure where he's getting those uranium rods but they are in impeccable quality.” — A vaeri scientist

Attack Method: Varies, but will usually bite or throw their body at an attacker.

[Collector] Neutral trait
Dobro always seem to gather odd items somebody wants.
[Adaptive] Positive trait
Dobro change based on their environment and what they eat.
[Hero Complex] Negative trait
Dobro have been known to help anyone and everyone they come across with any little problem they have.

Dobro do not have any specific gods they follow.

Dobro are a large, bipedal, reptilian species. They stand upright with help of their lengthy tails covered in spines, and their multi-toed claws which they use to dig into the ground. Their arms are lengthy, tending to dangle freely in front of their bodies when they relax. They have thick, lengthy necks, and long snouts with powerful jaws. The sides of their heads have lengthy, floppy ears.

These crocodiles come in many shapes and sizes, starting as small dog sized reptiles. A dobro can remain in this form until their death, needing to train and eat the flesh of other creatures to properly grow in size.

Based on the environment, training, and food a dobro has experienced they will eventually create a scaled shell around their body. They fall into a deep sleep until their body restructures itself, growing in size and form. An agile dobro might become lanky, able to sprint along or leap high into the air, while a tough durable dobro might become much more portly with hardened scales.

Dobro are known to also wear nothing but pants and an accessory. They tend to choose silken garments that flow freely over their bodies.

Dobro are a very social species. They enjoy meeting any and all people they come across. While they may come off as annoying at times, they are willing to help almost anyone with any minor problem they have.

The crocodiles also have a tendency to gather any and all items they come across, finding beauty and interest in the world around them. The items each dobro collect vary, both from dobro to dobro, and even among their own collections, which comes in handy when bartering with others. This is often done after a dobro has exhausted their interest with specific items in their collection, able to trade the resources others desire for new items to fascinate their own.

When a dobro sets their mind to something almost nothing can stop them from there goal. A dobro on their own might not be the strongest, but their willingness to help others and bring people together is a strong power, allowing them to accomplish what they have set their mind on.

The history of the dobro was offered by the melodico species, as the dobro themselves do not have much information themselves.

Dobro were originally bred as a pet like species for the original ruling species of the planet Discord. They were trained as companions and partners, taught to fetch supplies and support their owners. They could grow into massive, powerful beasts able to take on any creature to protect their masters. Then one day an experiment of the rulers began to swarm and take over the planet: the melodico.

These small creatures were hardly a match for the dobro, but with each dobro they took down, the melodico became more powerful. The melodico laid their eggs inside the recently killed, and in doing so were able to create more powerful brood. The arachnids grew and persevered over the dangerous environment of the planet, and soon under such deadly trails they were able to overpower even the strongest dobro, the training of the more pampered reptiles meaning nothing in comparison to them.

Once the ruling species, that the melodico refer to as "rubbish", were killed off, the dobro were left to wander the wilds of Discord. They became stunted in their growth, as their larger, stronger kin were hunted down by the melodico, cut down as they would any other wild creature. Due to this, the dobro went into hiding, the smallest and meekest of their species becoming the most favored to live.

One fateful day later, after many hundreds of years, a lone dobro found themselves being picked off by a group of melodico. The strength of this dobros will to live passed along to a melodico being born from their body, causing their mind to transfer into this young spider. Using this knowledge, they traveled along in waiting among the melodico, before eventually saving another of their kind.

This unlikly duo of a croc and a spider began to work together, using the support of the freed melodico, they targeted the queen who ruled over the planet's space port. After a long and difficult battle, the duo and their free melodico allies triumphed, killing the queen and escaping off world with a massive group of the dobro, letting them loose into the galaxy. Strangely, the melodico under the hivemind's influence seemed to respect the dobro's strength, and this battle would forever change the melodico and how they viewed the universe.

Elemental scales: Dobro are capable of adapting to their environment, and gain a resistance to what they grow up around. A dobro near intense heat might gain hot coal like scales, or one that eats a lot of poison might look sickly but gain resistance to poison.

Best pals: Dobro can find a friend in almost anyone, and when they find a friend for life they will travel together and combine their strengths.

• The history of the dobro can be found in the cult classic "Dobro Melodico" for the Notaildo6400.

• Marsue and dobro like to bask in the sun together, sharing stories and writing theme songs.

• If a species is larger than a dobro only a strong type dobro will still carry their partner.

-Back to Species Menu-
< Divirot
Drakon >