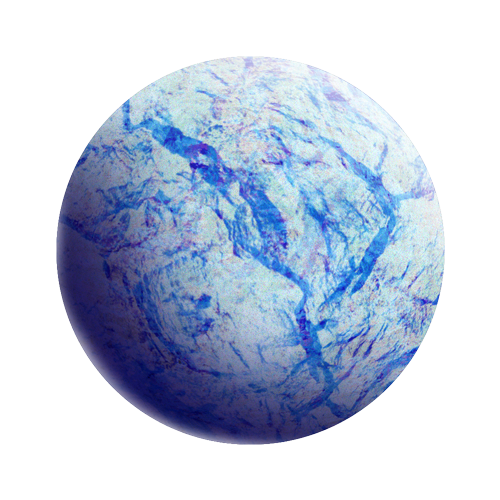 “IF YOU CAN READ THIS, IT'S TOO LATE FOR YOU” — Scrawled inside of an abadoned ship, found deep inside a crevasse

The surface of Helmutzi is covered in thick layers of snow, ice, and sand, and intermittently pocked with ancient ruins, massive chasms, and large craters. The sky is constantly shrouded by a thick covering of dust and snow, leaving the planet almost constantly shrouded in darkness.

Years ago, Helmutzi once served as a bustling trading hub and rest stop for crews from all walks of life. The uutzi's technological and engineering know-how, paired with their seemingly endless supply of replacement parts and scrap gave Helmutzi a reputation as a lucky find for struggling crews, somewhere to get their ships repaired within days or even hours before heading off to new adventures. The strange, cult-like Risen kept to themselves, and things were good.

This all changed when the true, sinister nature of the planets atmosphere was discovered, and the Risen took note of this.

When an aftik thought to be long dead staggered their way into the town of Scythe, looking much like the mummified natives of Helmutzi, rumors began to spread that something in the atmosphere facilitated this. When the news of this reached the Risen stronghold of Serenity, outsiders began disappearing shortly after, with only a few returning to Scythe years later, converted and unable to explain what had happened. Tensions began to rise, as talks of settlers evacuating the planet entirely or even requesting military back up to investigate Serenity, more and more people began to vanish, with fewer and fewer finding their way back home.

All the while, Serenity grew.

Then one day, without warning, Risen forces stormed Scythe in an assault spearheaded by their leader, Nix. Any non-uutzi were killed on the spot, their bodies dragged away to be shipped back to Serenity for conversion, and any uutzi found to be harboring outsiders were executed, their bodies left as warnings to anyone else who would oppose the new Risen regime. Few settlers were able to escape the massacre, and those who did are hesitant to speak of the events of that day. The uutzi who survived the assault formed a new settlement, Cavity, deep within one of the many crevasses of Helmutzi, where they've remained since.

Since these events, Serenity has grown into a massive, walled city, and Helmutzi's legacy has been solidified as one of death and fear.

Scythe: Previously the largest settlement on Helmutzi, before the Risen attack. Now left as a grim monument to the Risen's brutal assault, few buildings remain, most lost either to the weather or scavengers. Skeletal remains of uutzi have been left behind, strung to poles and serving as a warning to any explorers of what awaits them.

Cavity: Established by the survivors of the Scythe Massacre and buried deep inside a crevasse, Cavity is arguably the safest place for wayward crews looking to find their way off Helmutzi and back to relative safety. Uutzi here rarely interact with outsiders, insisting they get what they need as quickly as possible and leave, fearing the prospect of the Risen finding them. Converts who managed to escape enslavement in Serenity make up around half of Cavities population at any given time, though many of them seek freedom with the rare few spacefaring groups who pass through.

Serenity: Now the largest city on Helmutzi, populated solely by Risen and shrouded in mystery. Little information exists on the walled city, and ships attempting to fly over to get a better view are shot down, their crews taken to be converted. Converts who have managed to escape Helmutzi speak of a brutalist, utilitarian city, with tightly packed streets and massive facilities dedicated to the training and arming of Risen soldiers. Of the few things that are certain about Serenity is the single, massive spire extending from it's center, believed to be the base of operations for the Risen leader, and the ring of empty space just inside the wall, where bodies are left to be converted.

Conversion: Strange biological compounds present throughout Helmutzi's environment facilitate the mummification of any organic species who's bodies are left out in the open for a period of five to ten years, ultimately leading to their spontaneous resurrection as a convert.

• Far north of Serenity is a gigantic crater, notably larger than the rest of the craters dotting the surface. All uutzi avoid this place, with many of them simply stating that going there "feels wrong," and the few Risen willing to answer questions only referring to it as "where it all began."