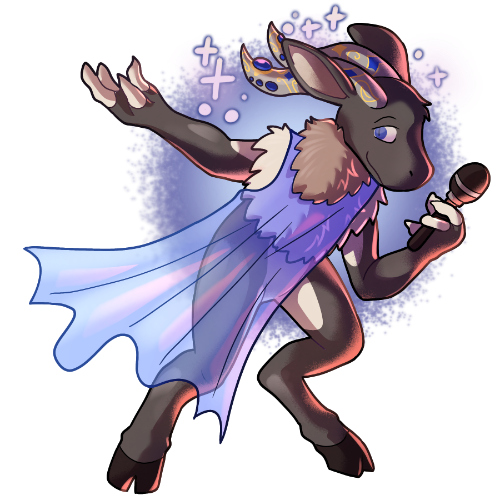 “And I hath heard yond Gov'rness Millina toldeth King Skr'Lagroth yond his military wast so pathetic, coequal an army of mud breath'rs couldst besiege his castle and burneth his peasants' crops to cind'rs...” — A cerveth politician at a peace treaty.

[Gossiper] Neutral trait
Whatever the situation, you can bet this character has heard (or wants to hear) the lowdown. Whether or not it's reliable info is another story. Characters with this trait tend to be very chatty.
[Cunning] Positive trait
This character is crafty when it comes to lying and deception, able to more easily trick others to get what they want. They may also have a knack for illusions.
[Unintelligible Accent] Negative trait
An advanced form of [Speaks with an Accent]. This particular accent is strong enough to make understanding or translating difficult.

Cerveth religion is usually very quiet and private, as they tend to dislike bringing down the mood with the subject of the gods.

Gods: The Poetnix, The Helper

Cerveth are a tall, bipedal species of herbivorous, arctic-dwelling mammals, standing on two unguligrade legs that end in a cloven hoof. Their hands have four fingers, each covered by the same material as their hooves, with two being opposable. They each have a single tail, which is long at birth, but docked shortly afterwards to minimize heat loss.

Cerveth fur is typically short and very dense, trapping the individual's body heat close to them, but longhaired cerveth do exist, and have become much more common on Reine due to the shift in climate. Most notable about cerveth fur is the large ruff of thicker fur around their neck and chest area. Cerveth are by and large very protective of this area, often not allowing others to even touch it unless they trust them very much, as it's upkeep and cleanliness plays a large part in determining an individual's social ranking amongst other cerveth, a concept that exists as a relic of cerveth culture before joining the galactic community. Cerveth tend to come in shades of warm or neutral colors.

All cerveth sport a pair of large horns on top of their heads. These begin to grow in during the cerveth's first year of life, and come in a wide variety of styles, from thin and branched, like that of a terrietes, to wide and heavy, even conical. Unlike antlers, a cerveth's horns are made of bone and connected to the skull, and thus do not shed, instead growing slowly as the cerveth ages. Large, decorated horns are seen as a status symbol in cerveth culture, often painted, carved, or even inlaid with precious metals and gems. If a cerveth breaks or otherwise loses one of their horns, a prosthetic can be made, usually of wood or plastic, but their horns will often be somewhat asymmetrical due to their constant growth. Publicly pointing out a cerveth's asymmetrical horns is seen as extremely rude, and is often cause for the perpetrator to become the subject of wild rumors and gossip.

Cerveth live for the drama. No matter whether it's a minor change in their coworker's schedule, or a political scandal stretching back decades, if it'll cause a stir at a social gathering, a cerveth is telling everyone who will listen. Every cerveth has their own 'rules' on how they gossip; some may only be interested in gossiping about people they don't personally know, some may decide to only spread harmless rumors, while others may share exclusively positive rumors. The reasoning for this is half from an evolutionary instinct to share information around the herd, allowing them to react quickly to danger, and half in the history of the cerveth race; sharing secrets and gossip is held in high esteem in modern cerveth culture as the thing that saved their species from enslavement and rocketed them into the notails' good graces.

According to documents and records of their civilization pre-contact, it can be determined that cerveth culture was once largely centered around showing off one's own accomplishments and excellence, as well as the hard work it took to reach such levels of skill and perfection. Talent shows and celebrities were highly popular, and cerveth were always attempting to improve themselves and their craft. There is even evidence of a holiday whose name is roughly translated as "The White-Leaf Parade", in which cerveth would set up booths advertising skills they were particularly proficient in; it is believed that cerveth would train all year for the Parade, and competition amongst cerveth showing off the same skill was fierce. It should be noted that the Parade is no longer celebrated in modern times, and most of these historical cultural beliefs are considered outdated and old-fashioned by today's generation of cerveth.

When not causing social chaos, most people say that cerveth are fine people, if not a tad snobbish, and notoriously difficult to understand due to the strange dialect they speak. This dialect, known as Reinian Limlish, is only present in those raised either on Reine or by other cerveth that speak Reinian Limlish, and cerveth raised by other species will speak in common Limlish.

Discovered early in the Silent Era, the cerveth were originally one of 3 sentient species living in their star system. They had established interplanetary trade, and were gearing up to make the jump to interstellar travel, when the cerveth made first contact with the notails. The notails informed the cerveth that they were going to take whatever they wanted from them, whether they liked it or not, and if they wanted to keep even a fraction of their species alive, they would do as the notails asked. When the cerveth retaliated, the notails proved their point by dropping a massive atomic bomb onto Reine, plunging the entire planet into a nuclear winter that it still suffers from, and from which it may likely never fully recover. The plants were dying. Innocent people were starving to death. The cerveth were quick to agree to the notails' demands.

The first targets were the chyprae. Short, stocky, and very tough, the cerveth explained to the notails that the chyprae lived in tunnels dug into the sides of the canyons that criss-crossed their tiny, arid homeworld, and would do well as miners, farmers, or any other sort of hard, menial labor they needed done. They were wrong. Too proud to let themselves be captured and enslaved by the notails, the chyprae fought until the bitter end, killing thousands of notails in the resulting war. Eventually, the notails grew tired of their resistance, and decided to cut their losses. A Selene ship was brought in, and the chypra homeworld was shot off into deep space, where it so far has yet to be recovered.

The notails, of course, confronted the cerveth government about their failure to follow through on their promises with the chyprae. The cerveth desperately threw their one remaining solar neighbor, the peaceful hivemind of the hexins, under the bus to preserve their species' freedom. The notails agreed to let the incident slide, if the cerveth agreed to send their own army to assist the notail military in the capture of the planet, a demand that the cerveth relented to without question. Thankfully for the cerveth, the hexins were quickly taken over, due to their culture being generally slow to conflict, preferring to hide in the treetop cities on their homeworld than fight. The hexins and the many species of animals they had domesticated were taken by the notails to be used as slaves. The cerveth were thanked for their generous contribution to the notail union, given a respected position on their species ladder as repayment, and left to their own devices.

• The famous cerveth 'fluff ruff' was originally evolved to keep the cerveth's core and internal organs warm, as well as provide their babies a warm place to sleep on cold winter nights. Baby cerveth are known as 'velets', rhyming with pellets.

• The cerveth are ruled by 5 queens, each one controlling one of the massive city-states covering most of the surface of Reine. Future queens are chosen at a young age by the current ruling queen, and tutored for their entire lives to take up the mantle upon the current queen's death.

• The native cerveth language, Reinian, is extremely complicated and difficult to learn, as it's many components must be slotted together perfectly to achieve the desired meaning, with very minimal slang. Post-contact, it is considered by most to be a dead or dying language.

-Back to Species Menu-
< Cereustratus
Chira >