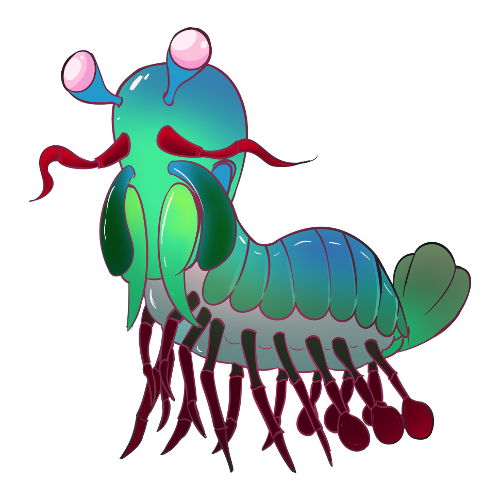 Attack Method: Try to force the opponent into close combat, then fight them with brute strength.

[Loyal] Neutral trait
This character is loyal to whoever they are aligned with and it would take a lot to ever drag them away from that.
[Passionate About Art] Positive trait
The character has a strong passion for some area. They might know more about this stuff than others, or may perform better on tasks relating to this topic than someone else with equivalent traits and skills.
[Aggressive] Negative trait
This character will attack anything they perceive as a threat. Unfortunately they perceive most things as a threat.

Gorgeous murals depicting some sort of god decorate their palaces. Stomatopoids seem very eager to tell other species about this god, but have been mostly unsuccessful thus far.

Stomatopoids resemble the mantis shrimp of Earth, with their three-pupiled stalk eyes, their colorful carapaces, and their deadly arms.

There are two varieties of stomatopoid. One has sickle-like arms and the other has hammer-like arms. Both can strike with their arms at the speed of a fired bullet, and as such are unparalleled in unarmed combat. Fortunately their society provides them with many different tools, incomprehensible to most other species, so they can create art about as finely as any species with grasping appendages. They are aquatic and need reverse-scuba gear to function on dry land for extended periods of time as well as a body of water to hydrate and sleep in.

The stomatopoids are nothing short of an enigma to species everywhere. While they are clearly advanced - perhaps even one of the most advanced species in existence - their only method of communication is by changing the colours of their carapace, mostly through the ultraviolet spectrum. They have difficulty interpreting both pictograms and sounds, so communication with them has been incredibly basic. It has been only further hampered by their territorial aggression and refusal to let anyone study them or their technology. While they seem happy to try and explain things themselves, this has failed to work in absolutely any sense and they stubbornly refuse to try fix the problem any other way. To make matters worse, an unknown substance in their exoskeletons makes them immune to psychic transmissions, so even that isn't a viable solution.

On their homeworld they live in immense, palace-like colonies where each individual has a small cubby hole cave to themselves and all other spaces are shared. Even on other planets they tend to group together. These territories they fiercely defend from intruders with terrifying weaponry or just their powerful arms. Only through gifts of food and shiny objects and other grand gestures of peace can they be coaxed into allowing foreign species to enter their homes.

Outside of their home territories or when they have deemed an individual trustworthy, stomatopoids are friendly and loyal, if wary. Visitors are always welcomed with lavish meals and stomatopoids will not allow them to leave without a small mountain of gifts, although every second a stranger is in a stomatopoid's territory they will be watched and attacked if they put even one foot out of line.

Stomatopoids seem to be devoted to art and beauty. They can often be seen decorating their homes and the homes of other species around them. It can be very difficult to explain when this is undesired.

The history of stomatopoids before their discovery is largely unknown, since attempts at disclosing it have been as incredibly unsuccessful as all other communication with them. Their colonies appear thousands of years old, however. Ocean covers ninety percent of their homeplant, so the stomatopoids seem to have used their powerful arms to carve great structures out of the towering reefs beneath the waves.

Upon their discovery, the first thing they did was blast the intruding ships out of the sky. For the next few decades a bloody war raged between them and an increasing number of species trying to be the first to either land on the planet or destroy it. It wasn't until one began to send diplomatic emissaries to the stomatopoids' colonies on other planets in their solar system that the stomatopoids finally began to relent and let small diplomatic parties through.

Stomatopoid satellites and space stations are scattered through the space surrounding the few solar systems around them. They never seem to have picked up alien signals due to operating in an utterly incomprehensible fashion. Stomatopoids must have thought they were alone in the universe for an unknowably long time.

Color changing: They can see in 16 colors, many of which lie in the ultraviolet spectrum. They are able to communicate amongst themselves by changing the ultraviolet pigments on their carapaces.

• The stomatopoids' color changing abilities lend themselves to beautiful dance and theater performances. The tockhau have gone to great diplomatic lengths to recruit some of them as performers.

• Stomatopoids seem to view most alien art as dull, probably due to the amount of colours they can see in. They frequently try to improve it.

-Back to Species Menu-
< Stellavis
Strix >