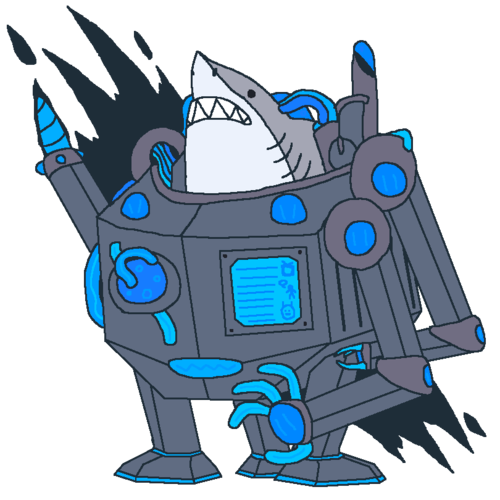 “Hard to climb corporate ladder without hands or feet.” — A selachim

Attack Method: Selachim prefer not to fight, absorbing attacks with their armor and waiting for backup or their attacker's exhaustion.

[Monotone] Neutral trait
This character speaks in a monotonous and somewhat robotic manner. It may be difficult to determine their feelings from their tone of voice.
[Expansive] Positive trait
This character is capable of expanded stat performance, traits, skills and/or abilities through some sort of expansion pack system or through external adaptions. Characters with this trait usually have lower base stats if the system they use gives them a boost in stat points. Only one expansion pack with the specific abilities and stat boosts it gives may be enabled at a time. Changing from one pack to another takes one turn to complete.
[Headstrong] Negative trait
This character is commonly stuck in their ways and is unwilling to change their thoughts on matters. This character is likely to believe what they think is the best option and what everyone else should believe.

Selachim do not worship, and have a particular distaste for religions which talk about how horrible existence is.

Selachim are a marine species resembling any number of sharks, encased up to their gills in large exosuits. These suits are rarely if ever humanoid in form, being only vaguely based on organic life forms and sporting any number of arms and legs. The hulls act as a filtration and hydration system for the selachim within, often decked with water-carrying pipes. Older, more experienced selachim will boast better-designed, more aesthetically pleasing hulls than their juniors.

Selachim are valued across the galaxy for being hard workers, capable of applying great diligence toward any work they're convinced will benefit selachind. Due to Mare's limited natural resources and demand far outstripping supply for top-of-the-line hulls, upgrade recipients are chosen based on merit.

Juvenile selachim are raised in thousands-strong shoals of harvested eggs and released into the open ocean, supervised by Wet Nurses who indoctrinate the young on the many wonders of above-water society and the various jobs they might aspire to following their graduation. The selachim learn from a young age that hard work always yields personal reward, if one is patient.

This confidence in meritocracy can be challenged when working with other species, and the selachim's typical bluntness when stating its views will become pure stubbornness in the face of perceived injustice. They'll rarely if ever resort to violence though, as that reflects pretty badly on them as a species.

Selachim were once the apex predator fauna of their watery homeworld Mare, uplifted into a species in their own right by oblein experiments in mental development. The now-sentient selachim astounded the oblein by expressing their gratitude, while also asking to be left alone to figure out this whole "being people" business at their own pace.

The oblein obliged, and came back some time later when the selachim sent out a request for experts in programming, metallurgy, and bionic augmentation. The selachim's curiosity had finally turned to the world beyond their ocean, and the first thing they'd figured was the world beyond wasn't wet enough for their comfort.

When the selachim ventured out into space and realised just how lucky they were that their first interstellar encounter was with the considerate oblein, they counted their blessings and promised themselves as a species to not make things out there a bigger mess than they already were. They still wanted more kicking rad bodies though, and metal imports being as expensive as they were, the selachim figured they should get out there and do their best to earn their collective keep.

Selachim hulls: After completing their schooling and reaching maturity, juvenile Selachim are surgically dismantled from the gills down, and their nervous systems installed in an exosuit commensurate with their job aspirations and demonstrated ability. To be selected for an upgrade, their application must be lodged and approved by the Lantern Board, overseers who determine who has earned better parts. Different hulls can affect an individual's raw strength, agility, and endurance, as well as provide augmentations like improved senses or nerve-linked weapon attachments. While repairs are cheap on offworld selachim outposts and free on Mare, replacing individual parts risks permanent nervous system damage and is never attempted.

• Components of old hulls are dismantled, cleaned and recycled in Landshark Labs when a selachim upgrades or dies. Along with their spawning-based reproductive method, this means they have little concept of biological family and even less understanding of inheritance or willing valued possessions to your nearest and dearest.

• Selachim dislike those who make assumptions about their intelligence. Though they speak slowly and deliberately, and are often large and hulking, they have sharp instincts and can come up with one solid idea while another species may think up five spurious ones.

• Selachim have a fascination with anything that requires steady hands and an eye for fine detail. Crafts and compositions with intricate hand-placed detail and attention to realism are the closest thing to "art" in selachim society. Impressionistic or allegorical works hold little appeal for them. 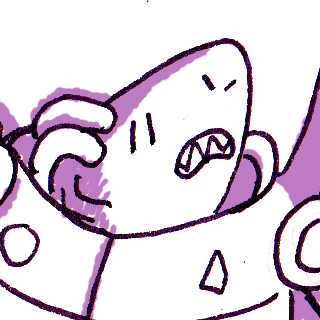