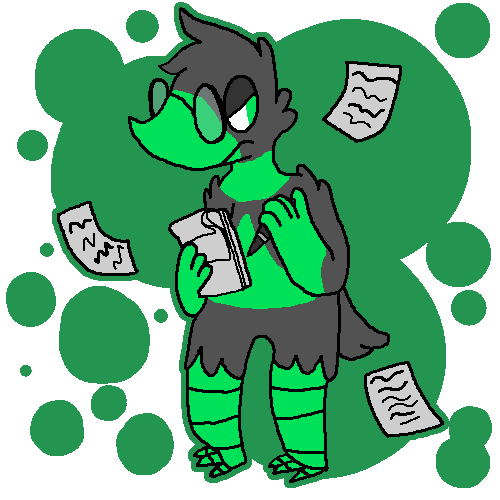 “Holla at ya there, chappy! Any chance you and those taught fists would fancy friendly scuffle? Nothing funny. Just a quick wrestle to stay sharp!” — An overly friendly pagepoh

[Eloquent] Neutral trait
This character knows just the right words for any situation. Their way with considered impressive but they may confuse people with their "fancy pants" words.
[Protective] Positive trait
This character is likely to know when things are going wrong with anyone they're protecting / anyone on their team. A protective character will defend them whenever possible. Endurance obtains a slight raise when the protective trait is active.
[Reckless] Negative trait
This character makes decisions quickly and often without thinking about the consequences. They are prone to taking actions based on their feelings and failing to see the big picture.

Pagepohs believe in the Poetnix, their guiding light on a world busting with creativity and discovery.

Pagepohs are a short and stocky species descended from large birds that have long since lost the ability to fly. They are bipedal with bulky arms and legs, the former, beefy limbs dressed with feathers, and the latter, tube-like limbs packed with muscle and shielded by a thick, calloused skin. While the feathers on their forearms are the most gaudy, a thin layer of down covers their entire bodies with the exception of their beaks and legs.

Their beaks are large and round, protruding from most of the front of their heads and curving upward to a point. From the back to the top of their heads spouts a small tuft of plumage that curves similarly. Another group of feathers make up their tiny tails. The pagepoh's curved beak is well suited for cutting bites out of fruits, and hide a set of teeth for mashing up large bites. This also helps them to eat seeds and certain soft meats, which is important as they no longer catch insects.

Pagepohs have tough, heavy bones everywhere but their rib cage, and have a soft pot belly to compensate for heavy blows. Pagepohs are very aware of this weak spot and guard it zealously while brawling, often morose than their face or eyes. They are also very top heavy. Although they are hard to break, a pagepoh's legs will tend to buckle if struck hard enough, and they can be disarmed quickly with a low sweep if they aren't prepared for it.

A pagepoh's eyes are on the sides of its head, making difficult to see around their massive beaks. They typically turn their heads to talk if eye contact is necessary, and the degree of the tilt may indicate formality. They are also genetically predisposed to have poor eyesight, near or far, typically both, which is why many will be encountered wearing some form of eyeglasses.

Pagepohs eye problems don't end with glasses. While full-on optical diseases aren't as common, problems such as colorblindness or the need for laser eye surgery are very much so, and almost 3% of all pagepohs are legally blind.

However, this doesn't stop plume color from being a prime factor in determining attractiveness. Pagepoh plumage comes in a thin spectrum ranging from an ocean blue to dandelion gold. They come in every color in between, but are considered most attractive the closer they are to a pure leaf-green. Some pagepohs hold this ruling to a high standard, but some don't care for it at all, and some even feel it's ridiculous given the fact that so many pagepohs have trouble telling the colors apart anyway.

Civil and industrious, pagepohs thrive in a post-mid industrial, media-driven society where someone can truly be anything they want to be.

Of course, modern amenities such as television, diners, runways, theaters etc have been established alongside the factories and apartments, giving pagepohs plenty of opportunity to pursue more artistic goals.

All this compounds to make pagepohs a remarkably diverse people in terms of profession and income, but there is a centralized planetary culture that varies slightly between the more and less fortunate.

Pagepohs are keen on class, being taught table manners at a very young age and holding courtesy as a pinnacle value. Bowing, shaking hands, a friendly hug, fist-bumping an opponent: all signs of respect and understanding. An pagepoh proverb goes, "Life and money, all else is fair."

In spite of this, pagepohs are taught to enjoy friendly fights in order to learn to protect their odd builds, and to promote physical contact and kinship. Other species may comment that pagepohs are very handsy, and sometimes a pagepoh's invitation to an innocent brawl is taken with a more promiscuous undertone.

Pagepohs are a species whom evolution has hit like a bus and who scoff at their humble origins. Eons ago, their ancestors hunted insects in the air. When supply became limited, they began to hunt on the ground. When this proved difficult, they became intelligent and created tools and traps, and very quickly learned to craft lenses to cope with their meager sight.

In the middle of their industrial advancement, when things would have otherwise progressed at a normal pace, the pagepohs sent signals into space, curious about other life in the cosmos. To their surprise, there was plenty of it, and they all had head starts.

Ambassadors from numerous regions of space rushed to welcome the young race to the stars, and pagepohs all of a sudden had access to technology that they never before dreamed of. With an already impressive array of inventions and a planet rich in minerals, there was plenty of trade to get the pagepohs off the ground.

Factories were modified, re-purposed, and built anew to accommodate the new possibilities. The planet full of a species yet unseen became a tourist destination, and the pagepohs responded accordingly and fantastically, quickly piling up shops and places of entertainment to earn more revenue.

In this manner, pagepohs have experienced a consistent golden age ever since their introduction to technology with no signs of slowing down, and have become a sort of economic superpower across galaxies. Some experts even theorize that a drop in pagepoh productivity now could cause a ripple that will affect more than half of the known universe.

• There is an infamous cult of pagepohs who believe that technology has ruined society, and that all pagepohs must evolve back into birds so as to fly as the poetnix does. They have been known to craft primitive wings and throw one another off buildings, not usually at once.