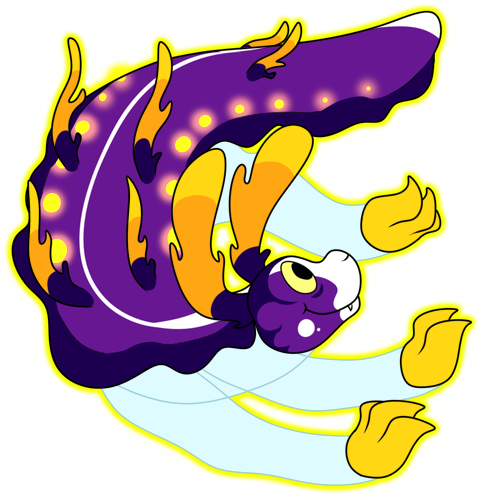 Attack Method: They rely on stealth and short bursts of speed, slashing with sharp claws.

The nautalids believe in five core gods, and while all are worshiped, Helix, the god who placed life in the ocean, is their 'king of gods' so to speak. They are unlikely to take on any other religious views.

Nautalids are small, squishy creatures from the planet Naturis. They have short legs and long, flat bodies which are often adorned with natural frills or other protrusions. They have long webbed toes ending in sharp claws, perfect for swimming and catching prey in the oceans where they live. They come in a wide variety of colors and patterns, ranging from the eye-burning neon to simple black and white. All nautalids, however, have a row of spots along their back or sides in high contrast with the rest of their patterning. These spots are faintly bioluminescent and serve as a device to distract predators and aid in attracting prey.

Nautalids have a unique feature in that parts of their body, their limbs and neck, are made of water. These are practically invisible when they are in the water, creating the illusion that a nautalid has floating hands, feet, and a head. The structure becomes more apparent when out of water, though still transparent.

Nautalids are able to spend short periods of time out of water without assistance, but must stay wet or risk death, since so much of their bodies are made out of water. Newer generations of nautalids, those who prefer to venture out of the ocean and off planet, have engineered special packs and suits to keep them wet, thereby increasing the amount of time they are able to stay out of water. It is recommended that any crew with a nautalid keep a kiddie-pool full of water on the ship in case of emergency.

Nautalids build complex social structures within their own species, developing large family groups that include both relatives and friends. These groups, called festivals, build towns out of coral and rock on the ocean floor and among reefs, utilizing the natural formations when creating their homes. Inlays of precious metals and minerals, as well as corals and even bone, are used as identifying markers, and carvings are very common in these communities. As such, artists are very popular and live well on commissions.

While incredibly social among each other, the nautalids are not so welcoming to other species, especially if they are land-based. They see these species as having betrayed the god Helix, and left the safety of the water to create an existence on land which was not necessary. Ironically, this is now the very thing the nautalids themselves are doing, especially the younger generations, who desire to explore the stars and lands beyond.

While the nautalids may seem cute and cuddly on the outside, they are actually highly capable killing machines, and will kill for sport. The larger the creature killed, the more credit a nautalid has in their community. However this is regulated to prevent extreme loss of ocean life, and certain species are off-limits.

Much of the nautalid history has no solid records, as it is hard to record information when life is spent underwater, and very few expeditions have been funded to explore old nautalid ruins. The decade leading up to the space age, however, is firmly cemented in history, as this is when all five species of Naturis worked together to reach beyond their own planetary system and discover intelligent life elsewhere.

The nautalids were first introduced to the malventus, who then introduced them to the terrietes, ignalisks, and artcuna. While the initial nautalid "ambassadors" had distaste for these other strange land species, they soon learned to accept these other creatures that they shared the planet with.

Although nautalids did have a disadvantage of being mostly restricted to water, they could also find safe areas of the ocean to mine and drill, keeping damage to the environment at a minimum while harvesting natural resources and fuel. As work progressed, they developed methods and technologies to spend longer periods of time out of the water, boosting their society even further.

In recent years, when they reached the space age, nautalids have proven competent navigators, especially in rather empty areas of space, since they are used to exploring the void of the ocean.

River Nautalid: The river nautalids lack the bright colors and frills of their oceanic counterparts, usually being dull earth tones, and with more of a taste for meat. They prefer ambush to chase, and wait in hiding in the mud and leaf litter, using their coloration as a camouflage until suitable prey comes by.

Deep-Sea Nautalid: Deep sea nautalids have much more bio-luminescence than those from the river or reef. They also tend to have darker base coloration, sharper teeth and claws, and are larger in size. These nautalids will never come on land, due to the fact that the deep sea pressure and chill temperatures are crucial to their survival.

Ignalisks: The ignalisk are the worst of the lot on the planet as far as the nautalids are concerned. The extreme arid climates they live in, as well as the heat they seem to project, make them seemingly deadly to the nautalids. As a result, the nautalids avoid the ignalisk and their biome like the plague, only trading in pre-approved sites for materials the other may need.

Terrietes: Nautalids and terrietes have a flourishing inter-species trade and commerce system. The nautalids will bring up corals and other sea minerals in exchange for land stones and metal. Though there are some disputes between individual members of the species, overall interaction is friendly.

Artcunas: Nautalids respect the artcunas for their hunting prowess and command over ranged weapons. Although the frosty species has distaste for them, the nautalids still try to reach out to learn and trade hunting tips and tricks, and compare catches.

• Some nautalids will use colored plastic decorations to change the color of their bio-luminescent spots if they do not like how they appear naturally.

• A nautalid's blood is a very pale blue, much like the water they swim in. You can tell it is blood and not ocean water, however, because it will have a bright, sweet scent similar to grapefruit.

• When a nautalid dies, their body is taken to a drop-off point where the warm, shallow reef water gives way to the deep open ocean. Their family will then place a specially carved stone as a grave marker, and the deceased nautalid is tossed into the abyss below.

• Nautalids give live birth, of anywhere from two to six babies. These babies are called nibbles.

-Back to Species Menu-
< Nanovvire
Neighbor >