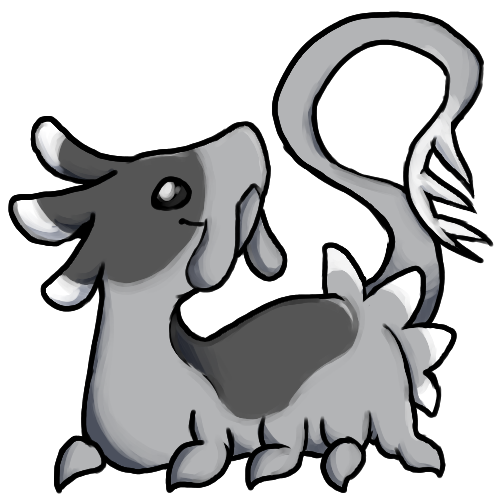 Attack Method: Raise spikes to appear larger. If this doesn't dissuade the enemy, they will use their barbed tail as a defense.

Blugs are small, arthropodic creatures with features resemblant of a variety of fauna, including guinea pigs and horseshoe crabs. Their main body consists of a long torso, a wide neck, and head. There is no visible sign of where each section starts, and the next ends. Beneath their stomach, blugs possess four pairs of segmented, crab-like legs, which keep the fauna a hair's length above the ground. The skin of blugs always has at least two colors, but can have more. These colors are not limited, but greyscale is the most common.

Along the blug's head and around its tail are a set of soft, antenna-like spines. When threatened, these spines will stand on end, doing little but making the blug appear larger and less appetizing. Excluding these spines, the only method of defense these fauna have are their long, whiplike tails. These tails are armed with three spikes, armed with a shocking variety of toxins.

Despite their limited amount of self defense, blugs have no teeth. Instead, they have large mouths with protrusions like that of a manta ray on either side.

Originally, blugs were genetically engineered by notails as lab animals. As a result of this, they have a few key aspects that enhance this aspect of their usage: the ability to produce a massive variety of toxins, vulnerability to many common diseases, and a surprising sturdiness and resistance to mutagens. However, they are amphibious, and do require an environment with both freshwater and land.

Due to being originally intended for lab usage, blugs are incredibly docile and trusting. While they will raise their spikes when they feel threatened, there's very few cases of a blug ever becoming violent. The vast majority of injuries from blugs comes from careless handling. Their typical attitude towards other species typically falls somewhere between bored indifference or an amiable curiosity.

When left to their own devices, blugs can seem rather lazy. Their default response to boredom is to sleep, so without any stimulus or need for food, a blug is content to sleep for hours on end. However, when presented with a more entertaining option, such as a new space to explore, or new additions to their surroundings such as another fauna, or an object, they will investigate whatever has been presented to them until they grow bored once again. Keeping multiple blugs together will keep them awake more of the time, but it is also common to just end up with a pile of sleeping blugs. While scientists have found that blugs do seem to thrive in groups, they don't seem to fare badly in isolation.

Wild Blugs: The result of lab blugs escaping and managing to survive in the harsh environment surrounding the notail labs. These blugs are significantly more hostile, and have grown more protective spikes. While the softer spikes on a blug do not produce toxins, they will on a wild blug. They also lack the variety of colors that domestic blugs have, typically being dark shades of brown and green. Curiously, wild blugs still lack any sort of teeth.

Multi Toxin: Blugs can produce many different types of toxins, and it seems to vary wildly between individual blugs. These toxins have been used to make a variety of antidotes. While blugs in labs have their spines altered to be unable to use these toxins offensively, it is still possible for inexperienced handlers to be stung.

• In spite of their adorable appearances, blugs make horrible pets. They cannot be handled without much caution, due to their toxic nature, and their terrible immune system. Keeping a blug is akin to keeping an aquarium, but with much more frequent cleanings.

• Blugs typically come in patchy patterning, but there have been blugs bred to have a variety of patterns, including stripes, spots, and many more patterns.

• Even if blugs make for incredibly difficult pets, people have selectively bred them to make "fancier" blugs with varying changes, such as more or less spikes. These changes aren't enough to create an entirely new subspecies, however.