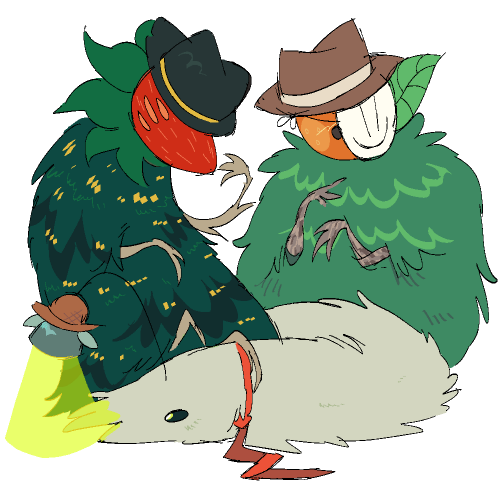 “⬛⬛⬛⬛⬛” — Keysmash confused after seeing an apple outside of its home planet for the first time.

Attack Method: Keysmashes excel at hunting due to their cunning strategies, closely stalking their prey until it's the right time for them to feast.

[Nocturnal] Neutral trait
This character can be found asleep during the middle of the day, when the rest of the crew is active and doing things, and awake at night, helping to keep watch over the rest of the crew. Like with most sleep cycles, the character can be forced to a schedule that isn't this, but will be more irritable and grumpy until normal sleep is resumed.
[Fashionable] Positive trait
This character has a sense of fashion and will get a boost in charisma when talking to other characters that like fashion.
[Unintelligible Accent] Negative trait
An advanced form of [Speaks with an Accent]. This particular accent is strong enough to make understanding or translating difficult.

Keysmash worship the god of harvest and the hunt, so they may have safe and bountiful hunts.

Thankfully, next to no keysmash truly believes in their religion with most of them usually being agnostic, and as such we don't have to deal with gods running around.

Keysmashes are the definition of an apex predator, if it were a strawberry plant with legs, running around and luring all kinds of animals to get closer, to get a taste of that juicy, ripe fruit, which promptly serves as a terrific last meal.

Their heads, which they utilize as lures, are connected to their bodies by the stem at the top of their head, which hangs down while they wait for prey. Hidden away is their mouth, a gaping hole ready to devour anything that comes close to it.

Following the stem one can observe the branching nature of their bodies, closely resembling what would be commonly known as a bush: a conglomerate of stems thickly covered by lush foliage.

In place of feet, keysmashes sport a network of roots, which allow them to effectively and stealthily scuttle around, though limiting them to stay on ground at all times. Keysmashes also sport a variety of hats, ready to strike awe onto any and all witnesses of their pomp, matched with anything considered to be fashionable enough, be it a strand of twinkle lights or an oversized sweater only topped in ridiculousness by the aforementioned hat.

In spite of all of this, keysmashes are fully sentient, congregating in cities where they, for the most part, pursue their greatest passion: having the biggest, most gallant, gaudiest, fanciest, most awe-inspiring hat in their side of the cosmos.

To them, hats aren't vanity, but rather, an extension of their selves, as hats represent everything a keysmash can strive for: elegance, surprise, and perfection. For the most part, keysmashes only take off their hats when absolutely necessary, be it for hunting, or eating. As such, the common keysmash will never show their mouth to any except their closest confidants.

The ⬛⬛⬛⬛, held once a year before winter to prepare for the harsh weather and lack of prey, is the pride of many keysmashes who partake in it, competing for who scores the biggest prey, or who hunts the most game in one day. Tradition ranks among the highest for a keysmash, second only to hats. As such, most keysmashes consider their first participation in the ⬛⬛⬛⬛ to be the most important moment in their lives. Although not particularly religious, keysmashes often prepare small shrines and offerings to their god.

Usually, the upkeep of shrines and organization of the ⬛⬛⬛⬛, as well as other holidays, is up to each tribe's keysmash elders, and as such, week-long feasts are held in their honor.

Keysmashes began as small carnivorous lure plants, reproducing the shape of common berries insects in their homeplanet ate, waiting until the prey walked into the right spot before devouring it. Due to the success of this tactic, keysmashes eventually developed certain traits to help them in their goals, such as a sweet undertone and sentience, little by little going up the food chain. They have gone from simple food for small animals, to apex predators, or as they are more well-known nowadays, the epitome of hat fashion.

Soon after developing sentience, keysmashes began congregating in tribal societies, due to the fact that even if they were strong, many would still die from barking up the wrong tree. These small communities slowly grew and became bustling towns, where elders would take the lead and coordinate their citizens. Their naturally plump constitution made them quite weaker than their normal counterparts, instead making them stay at the villages to rule, gaining the trust of other keysmashes who began seeing following them as tradition.

These differences consolidated when they grew into a nation, with their elders taking care of matters concerning the state of affairs and well-being of their brethren, and keysmashes worrying more about how to care for themselves, such was the tradition, to follow the word of the elder without hesitation, as it often times proved most helpful for everyone. Sometimes, these orders, though small, were enough to shake the entire keysmash culture.

In all keysmash history books, the ⬛⬛⬛⬛⬛⬛ is an event catalogued as a turning point for their species, when, as they say, "they stopped being uncivilized barbarians to become fashion incarnate". The rules were simple. All keysmashes should cover their mouth hole when in public, and it should be considered indecency to not do so. At first, the ⬛⬛⬛⬛⬛⬛ was met with mediocre reception, people not really understanding the meaning behind it. Keysmashes ended up just covered themselves with leaves, but bit by bit, it became the blooming industry they have nowadays, being the pride of any and all keysmashes.

Keysmash elder: Every few generations, a keysmash with a more robust complexion would be born, for the purpose of protecting and regulating tribes. They're known as elder keysmashes due to their longevity, being able to live for many times what a normal keysmash is capable of, at the cost of more sluggish and limited movements. Nowadays, elder keysmashes are commonly found as the heads of families or companies, due to their skill at managing a great number of people.

Veggieheads: Veggieheads present an uncommon mutation: being born without a mouth. As such, they do not participate in the ⬛⬛⬛⬛, due to being unable to find nourishment by these means. To be able to survive, they spend even more time than the average keysmash rooted to the ground, which slowly causes them to lose mobility, until one day they're destined to stay in place until the end of their days. Thanks to this, most veggieheads can be interpreted as wandering monks; peddling from town to town helping people and dispensing wisdom.

Anomalous sense: Keysmashes possess anomalistic psychic powers, which allow them to sense their environment. These powers also appear to be linked to a sort of personal reality that the species has. Often they will see events no other species can see and will act as if it were as true as any other action. When grouped together all keysmashes in the area will see the same occurrences, for example, if one keysmash sees million of crabs emerging from the waves, each keysmash around will likewise view the same.

Some believe that they are viewing a parallel dimension while others are sure that is closer to a shared mass hallucination.

• Some keysmashes are so involved in the universal fashion scene that they will copy clothing habits from the people around them, being particularly attracted to other species' fashion quirks, such as a notail's masks, becoming a walking wardrobe if they end up assimilating too many attires.

• Keysmashes have a considerable dislike for limpoturts, being immune to them thanks to their mouths being at the top of their heads, but also being considerably annoyed by them. If no other options are available, a keysmash might incur using a limpoturt if the social pressure is big enough.

• Due to their unique mouth and vocal chords, attempts at communication using their native language come out as a garbled mess for the average person, hence the nickname "keysmash". Over time, keysmashes have adapted to limbolish, reducing most of this effect while speaking it.

• A group of keysmashes is called a traffic jam.

• The black lines of text are not an error, the species' native language has no written form and cannot be translated into limboish.

-Back to Species Menu-
< Kapricanus
Kheiron >