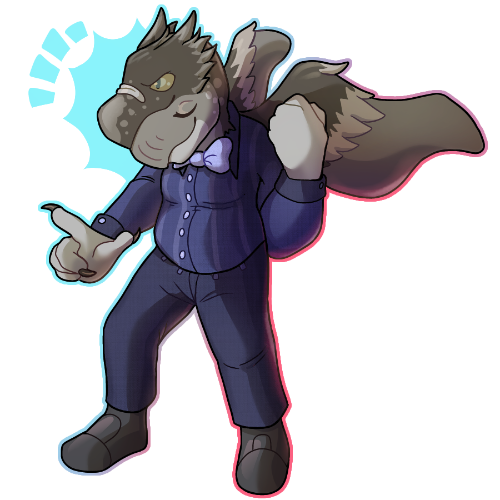 “I have never seen someone so aggressively passionate about hot tubs. Seriously, I was almost convinced to buy one with the luxury bubble jets for my spaceship and crew.” — An anonymous captain

Attack Method: Typically not physical fighters, however, they will use their 2-toned voice to scare/confuse the opponent and their true head to bite.

[Foul-mouthed] Neutral trait
This Fucking species Fucking swears as much as Fucking possible, but has the ability to stop if necessary. Other characters may be put off or offended by this species' foul language.
[Confident] Positive trait
This species is confident in what they do and rarely ever doubts themselves or the people they believe in. They're able to trust people and can raise the morale of people they trust.
[Patronizing] Negative trait
This species often thinks they are higher than other people in some way, such as intellectually, psychically, monetary, or otherwise. They will often flaunt this fact in some way, such as giving goods, or just loudly proclaiming it whenever a "lesser" is failing at a task they could do. Many do not actually mean to offend, and believe they're doing a friendly gesture or making an observation without realizing the annoyance of the other party.

They are not typically caring for god worship, due to them being far more concerned over their buildings and water services.

The auctorocors are bipedal, chubbier species due to their marine origins and lower temperature homeplanet. Common to their homeplanet - auctorocors possess two "heads" - a top, 'true' head, which is the mouth that their primary vocalizations and esophagus is located within, along with their bird-like land eyes.

They also have a feather crest on top of their head, and a cere to breathe on land. Their bottom head, the 'false' head, contains the secondary vocalizations and their aquatic eyes, which need to constantly be moisturized, and thus, are rarely seen open within those who space travel. Alongside their eyes, each auctrorcor has a set of gills which also close when not in use. Both the land and water variants have two 'water wings', however, the wings are smaller on the land auctorocors since it's largely unneeded. To keep warm, be in the cold waters of their homeworld, or on the frosty surface, their chest, shoulders, upper arms, and a part of their water wings are covered in thicker downy feathers.

Loud, proud, and confident, auctorocors are mainly business people who thrive upon making their main water services better. Their culture is unafraid of friendly critique and swearing, and can often be described as having 'tough love' to outsiders, especially with a complicated language laden with odd polyphonic overtones.

It certainly doesn't detract from the ability to show comadere or compassion, however, as many are willing to show their willingness to help others.

The auctorocors are creatures who initially evolved more or less underwater, but over millions of years, a portion of the species came to the surface on their low gravity, colder planet. They gained the ability to breathe air and water, as well as growing avian/penguin-like down feathers on their shoulders. After evolving and creating a divide between the Land and Water Auctorocors, there was a small war, however settled fairly quickly as equality policies and laws were negotiated. After the war, their more bombastic natures were focused into competing with one another, up until the arrival of aliens to their home world, and subsequent introduction into the federation.

More recently, they are renowned for their on-planet "death defying" unique waterparks, which often take advantage of the low-gravity of their homeworld. Watersports, and anything that has to do with the sale and repair of water-based items, furniture, amusements, and the like, became their side areas of focus, as it would allow them to satisfy their desires for competition on a galactic scale.

Neh'calin is a lower-gravity planet, and is mildly frigid. 70% of their planet consists of their vast oceans, while the rest is dotted with a few small islands and larger landmasses. Whatever isn't taken up by the variety of lush plant life, is overtaken by major chains of waterparks, water sports arenas, hot tubs, cold baths, hotels, and numerous shops to lure in the wallets of visitors.

Water: The water auctorocors live mainly in water, are far taller and more insulated with body fat, and have bigger water-wings. Most of them do not space travel, as it would leave them overheating quickly and likely being crushed under their own weight, as they are not adapted whatsoever to do such activities.

Cold-treader: This trait allows auctorocors to easily swim through colder waters due to natural adaptation. Any auctorocors attempting to swim through frigid waters will not have any debuffs or struggles, assuming that the waters are unobtrusive. However, they are not entirely immune to cold waters within the extremes, and cannot dive to extreme depths without the aid of proper equipment.

• The ideal position among the various water-based jobs are those either dealing with management or the selling of goods. Even a low-wage sales job will tend to satisfy their basic desires, though the bottom of the working chain are considered to be the plumbers, as their job is often lonesome, dirty work, and or tedious.

• Casually cursing is a societal norm; however, if met with other species or are operating within business, they will likely tone it down - or try to. It doesn't always go well.