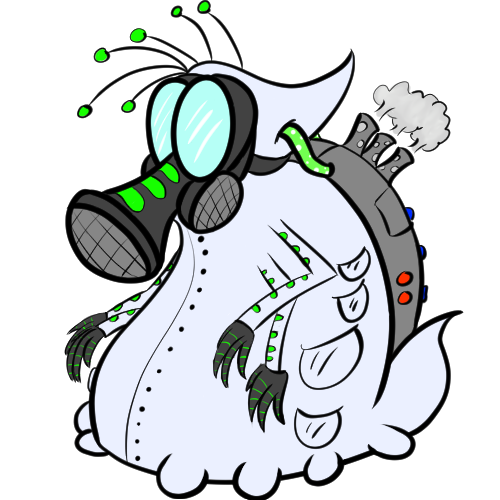 “I know this isn't how we usually do things, but you see one of these right here? Kill them if there is any chance they will escape.” — A Lovirtis official to their department

Attack Method: Get to safety then sick a monster onto the target.

Hazcots belive in no god.

Hazcots are a species of sluglike caterpillars that come to a height of about 6 feet. They are never seen without their lab coats and gas masks and it is often speculated that they themselves do not know how they look underneath their outfits anymore. All Hazcots look identical and are only able to be told apart by their own species.

Their gasmask is always very long to support their long snouts underneath. The green glow all over their body is not painted on but in fact see threw glass that shows bubbling green liquid within. They have multiple antennae on their heads which they can use to communicate with their creations at a large distance.

The large machine on their backs constantly pumps nuclear material into the head of the hazcot to keep their brains active at their normal levels, before being then siphoned back out of their bloodstream by the machine to be purified and re-used once more. This prevents the hazcot from needing food or sleep of any kind, leaving them to work tirelessly on their latest horrors, it does however leave them in a constant state of pain and a everlasting migraine.

The hands of the hazcot are the only part of it that is openly visible, yet even those appear to be covered by a slight film of some kind that keeps their hands from actually touching the outside world. Their bodies are soft and jiggly to touch almost like jelly.

Hazcots all share one personality but are not a hive mind. There are some minor differences between them but their drive makes them very similar on the surface. All hazcot are driven by a drive to perfect and bring out the full potential of the species of the universe. They go from planet to planet or capture small vessels to abduct the inhabitants in order to run foul and highly illegal experiments on them to turn them into ferocious weapons and monsters. They show no remorse in doing this and find the things they do to their victims 'cute.'

Their way of speech is quite scientific yet also quite simple, addressing each other by their titles only and only referring to others as their species name. They only see the universe as their sandbox to play around it and to push species to their potential. Unfortunately to a hazcot that means taking said species, pumping their unique traits to a maximum while reducing everything else to almost nothing, to make them the best killing machine possible.

They do things less for science and more for "I want to see what happens if we do this and if we can make this happen". Doing things more 'Just cause' rather than for a real scientific purpose. They just want to see how much they can push the laws of the universe. In terms of morals they have none. They care little for what happens to others and if they can cause a entire planet to have no sign of life left that is a successful experiment in their books.

They consider all other species in the universe and see them as useless, unless it is a extremely streamlined species that are build to do one thing and one thing alone. When interacting with a species they have kidnapped they will often not talk to the subjects at all or simply taunt them about how they will soon be something much better. Almost all of their experiments heavily damage the intelligence of the subject to the point of where they are feral so they see little reason to interact with them much.

To their experiments once complete the hazcots show perhaps their only sign of compassion. Once their experiments are done they treat their horror experiments very well, giving them pets and generally actually caring for them, even if they usually send them off to a planet to kill and/or get killed soon after. The hazcot themselves are a little unsure why they feel this way, but they theorize it is because they too came to be from unnatural causes.

Hazcot were once fauna that lived on a swamplike planet that was used for waste disposal of all kinds, which did include nuclear waste. The mix of chemicals and waste ended up changing the fauna, one of these were the hazcot which grew a large intelligence mixed with a twisted sentience. They quickly used the garbage or waste to build up their own labs, experimenting with the substances the other planets provided them to create their first experiments.

It didn't take them very long to concoct a bacterium that ate away at all the plant life on the planet, leaving it barren. The hazcot quickly began manufacturing a base that provided them the air they needed and continued their work, creating a monster from another fauna to take out the crew of the next garbage disposal vessel, which they then filled with monsters of their own creation and flew to a random nearby planet to see what would happen if they let them loose.

This went on for a while where they would eventually gather enough materials from other planets to build their own ships to send out to cause havoc, which to their surprise brought on the wrath of the universe. They were assaulted and hunted down, and within a day their numbers had dropped from thousands to a mere dozen. This little group managed to escape on a stealth ship, where they reside to this day.

From this ship they continue their work, hunted by all and causing havoc from the shadows. The only way to know a hazcot was there is either a kidnapping report or the report of one of their monstrosities showing up to wreak havoc. However, by the time the experiment is killed or subdued they are almost always already long gone. Over the years some have been killed through, leaving the hazcot with about half a dozen left in their ranks.

The hazcot home planet of Kolororo 13 is a by now barren planet devoid of any life of air. The only thing on this planet is a marshy land of mud with multiple abandoned hazcot laboratories. Inside some labs air still exists to breath if they were overlooked in the hazcot raid, the rest are all broken open and without air. In some of the overlooked or underground hazcot labs some life may remain or some horrible monstrosity may still lurk, however no hazcots remain on this planet.

Twisted Mind: Hazcots can sense the basic functions of most other species in order to determine what about them is most useful.

• The hazcot often repeat their favorite experiments over and over again on different species to see what changes in the outcome.

• The hazcots favorite monster to create is the Grgt. Which they find the cutest of all the experiments they have ever made.

• On many planets killing a hazcot on sight would be declared legal due to the harm they have, and can cause. A high reward is awarded to anybody who can prove they have killed a hazcot in these areas.

-Back to Species Menu-
< Gorgorse
Helixian >