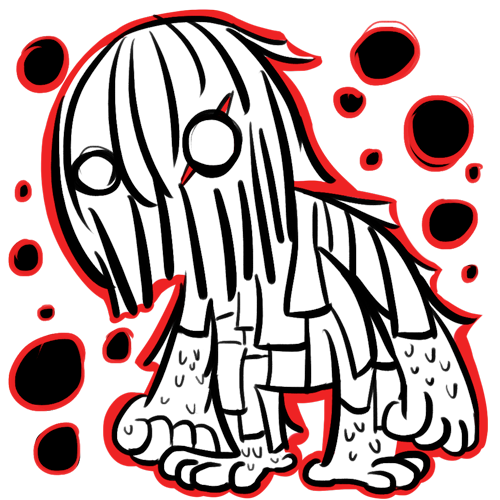 “We wouldn't be poor if we could take the money off those Gecks, we wouldn't be hungry if those Bigtooths weren't around to eat everything and we wouldn't be losing if those Rats just gave us their beasts! We have every reason to go to war.” — A Goldorian on the war they're waging

Attack Method: Charge straight at the opponent with the biggest weapon available.

[Folksy] Neutral trait
This character likes to use simple words and has little care for etiquette. They have an easier time getting along with lower class or less intelligent characters, but characters in higher rungs of society may see them as stupid or rude.
[Schadenfreude] Positive trait
This character enjoys it when bad things happen to other people, and will gain a boost in morale from witnessing it. They don't try to make this happen themselves and deaths will still upset them.
[Hothead] Negative trait
Although a character with this trait might be normally friendly, it does not take much to provoke them. If you prod at or question their beliefs, ideas, or otherwise challenge them, be prepared for them to lash out. A character with this trait can have trouble taking criticism well.

Goldorian honor their god, which they are very private about.

Original Creator: The One Guy

Large, muscular humanoids that are covered in hair. Females are slightly smaller and less muscled than that of males, and have wider hips. Their arms are slightly longer than the typical humanoid.

Goldorians are very strong, but also very violent and stupid; many wonder how they even developed space flight at all. In battle, they tend to prefer powerful weapons and brute strength over any sort of strategy. Many underestimate this but they tend to be very good at charging headfirst into battle.

Most live in poor conditions in the dictatorship that is the Goldorian Empire and most are required to spend at least some time in the empire's military. The empire spreads xenophobic propaganda and is not accepting of outsiders, but some individuals may be more open-minded. Despite the problems of the empire, a dictatorship is perhaps the only real form of government that would work for them given their nature. The harsh conditions combined with their violent nature leads to a very high death rate, but this is countered by a very high birth rate, and females are known to regularly give birth to up to quadruplets. Goldorians are very rare outside the empire, but there are a few who have managed to escape.

Not much is known about their history, given that they don't even record history, but their technological advancement and large numbers despite their violent and stupid nature indicates that they have been around for a very long time. They are known to have preyed upon and destroyed many less advanced species before being discovered by a civilization that could actually put up a fight. Many wars have been fought between other species and the Goldorian Empire, but for now there is an unsteady peace.

• Because it's likely that one of them will die soon anyway, goldorian parents like to give the same name to multiple children so they don't have to come up with too many ones. Goldorian kids often think this means only one of the two will survive, causing tension between siblings of the same name. They are often rather hostile towards people with the same names or similar names as them.

• Between the dictatorship that is their government and the dog-eats dog environment it creates, the goldorians have no room for charity. They see the charity loving baphometti as thieves that try to exploit them just like their government does, and commonly call them leeches.

-Back to Species Menu-
< Gnosis
Gondii >