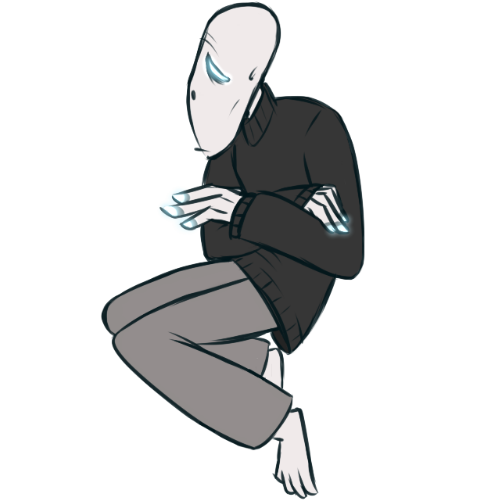 “This universe doesn't have peace is because everyone is busy looking at each other and going "Hey, that person isn't me!". Peace will only come when all can accept that everyone is not you.” — Loosely translated from ancient copez peace slab

Attack Method: They do not fight. If forced to, they resort to using nearby objects as weapons, but fighting weighs heavily on their emotional and mental state.

The copez are willing to accept any god that honors peace above all.

Gods: All positive sides of the Limbo gods

Original Creator: The One Guy
Rewritten by: MaggotsBoy

The copez are white skinned, hairless humanoids with elongated skeletons. They're extremely thin and lanky; a copez with a normal body weight will appear to be emaciated as their ribs will be exposed, however they're completely healthy. The skulls of the copez are elongated as the rest of their bodies, giving them a long, stretched pointed chin. They have crescent shaped eyes, giving them the appearance of being constantly world weary and tired, and have two slits for a nose, and two holes on the sides of their heads for ears.

Their spindly fingers have small, bioluminescent organs with in the tips, and may glow brighter or dimmer on command. This glow is commonly a pale blue color, but also may come in other colors such as green, purple, and rarely, white. The copez's shaped eyes and mouth also glow this same color. Copez skin color rarely varies from snow white, however some that have bred away from their home planet have began to produce children with blotches of ashen colored skin.

Copez have virtually no physical differences between gender, however copez seem to tell each other apart through hormones.

The copez are very logical. They tend to view themselves more as a unit within the team than as an individual. Copez will often travel in small groups, or in pairs, preferably with their own species. Copez will work alone if the situation calls for such, however their work is far better when teamed up with others. Copez have a hard time functioning on their own, without others to bounce ideas off of or communicate with they become paranoid and anxious. A group of copez will act as a think tank, as they hold a strong believe as a species, they can accomplish and resolve most issues without having to resort to violence. The copez are happily willing to work monotonous jobs that most species would find unappealing.

Copez are highly accepting of other species, but have a hard time understanding them as they do not experience emotions as strongly as most species. While research has lead them to understand other species better, the copez have trouble grasping the idea of the malice and wrong doings of other species. Copez are strictly pacifistic. Having never experienced much strife or war, they feel that by teaching others their beliefs, they may be able to spread some peacefulness across the universe. This has only worked on a very small scale, and some other species tend to view the copez as preachy rather than bringers of peace and good.

The copez come from a rather atypical planet where life has evolved without violence and with little danger. All forms of life on the copez's home planet have evolved to be herbivores, and live within peace with each other. The copez species as they evolved, had experienced very little hardships aside from natural disaster, and have no experience with war or using weaponry of any kind. As such, they established a working communism, and advanced in technology very quickly with no competition to hold them back.

The copez made it to the space age fairly easily. When first encountering species from other planets, they were confused, but accepting of them. Many copez ships within the first years of traveling to other planets never made it back to their home planet, and only a little over half of the ships sent out returned to home. This is likely due to their passive nature many had surrendered to other species that were not so welcoming to the foreigners. This led the majority of copez to be isolationists, but some of them are guided by curiosity to involve themselves with other species.

Light Tower: After the introduction of copez to the space age, they were met with problems that they had never experienced before. Many species had coveted the copez as an easy target for slavery, and the copez had nothing to fight against it, nor the will to fight. Over time, a new subspecies of copez had started to arise with a curious form of defense. The Light Towers are an extremely tall form of copez, their stretched bodies reaching up to 9 to 10 feet in height. Their hands are large, and reach below their knees, and glow far brighter than the normal copez. Their entire head as well glows, so much so that it may obscure their face. Light tower copez emit a low buzzing noise on command. When heard, most species report to feel an extreme sense of dread, that something terrible may happen if they are to approach closer to the light tower. Even individuals that know for a fact light tower copez hold the same pacifist values as normal copez, the noise still instills a fear that is extremely difficult to shake. This buzzing is more intense towards some specific species, such as notails or noxis-noverum. The noise can cause headaches and nausea if exposed to it for too long. The light tower copez are described as being unnaturally serene, moving slowly and gracefully. The birth of a light tower only occurs once in roughly a thousand copez births, and are revered in their community as protectors gifted by the gods. While the noise of the light towers effects all but the copez themselves, it attracts animals towards them, as if they were transfixed by the sound.

Pezzent: The name of the pezzents had originated as a derogatory term for copez that lived outside of their home plant, however over time this subspecies had reclaimed the term as their own. Pezzents are copez that had formed colonies far from their home planet, and have started to display behavior that would be considered odd by their peaceful cousins. Also known as 'war copez', the pezzents have adapted to the harsher life style of living with mixed communities and space faring. While they may still hold on to some shreds of their former extreme pacifist beliefs, pezzents are more likely to defend themselves or display violent behavior. With the intelligence retained, they have developed powerful weaponry and war time AI, which is more often sold than used by the pezzents at all. Normal copez do not shun their strange cousins, however they do not interact well with each other as the copez tend to be frightened by how much they've changed. The pezzent's skin is blotchy, covered in patches of darker skin that may spread as they age. It's theorized that this is due to living and breeding for so long away from their home planet, where the copez would often live within the darkness of underground tunnels and caves. Their bodies may also be slightly shorter, only reaching 6 feet in height, as well as having a slightly thicker or more muscular build.

• One of the reasons the copez have avoided being invaded yet is because the copez have agreed with many other species to take in non-meat eating animals on to their planet to help with conservation of species that are about to die out.

• Copez native language is made up of mostly hand gestures and glowing patterns with their finger tips. This language has been watered down to just hand gestures, and has become a universal sign language, adapted for both species that have either four or five fingers. 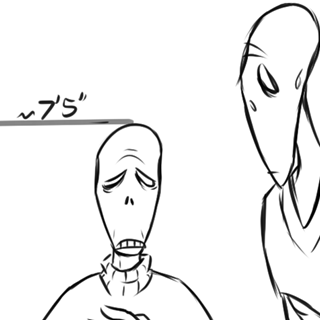 -Back to Species Menu-
< Contractor
Cortz >