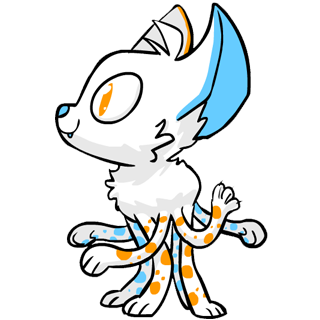 “What do you mean the source code isn't publicly available?!” — Gigne about to learn what copyright is

Attack Method: Attempt to talk things out before ever resorting to violence. As a last resort they will use an electric shock to stun their attacker and run.

Gignes have a highly syncretic religion defined by change and evolution. Their religion has a single god which, rather than staying in one state throughout all of time, they believe is constantly updating and evolving itself over time, just as the universe itself constantly changes. Because gignes believe that their god has many branches which take various forms, it is easy for them to merge the gods of other religions into their own, and it isn't unusual for a gigne to essentially honor another religion's gods as a way of honoring their own god.

Gods: One god, Many gods

A cat-like head with a tentacled underbody, the gignes are semi-telepathic beings that can communicate over long distances as long as there aren't too many walls in the way. Their coloration ranges in all sorts of garish neon hues, with their transparent tentacles being darker in colour than the thin fur covering their feline features. The spots on their tentacles are full of cells capable of photosynthesis, though it is impossible for a gigne to subsist off of light alone; at most, the photosynthesis acts as a supplement to their diet, not a replacement for other foods.

Gignes develop sexual characteristics only after they've found a suitable mate. They are not assigned genders at birth, but are allowed to choose their gender whenever they see fit or never choose one at all. Gigne kits are typically not referred to with any pronouns until they are old enough to choose how they would like to be referred to.

Effectively living batteries, gignes can store charge in the core of their body and release it through their metallic claws. This can be either a defense mechanism or, when carefully controlled through practice, a method of powering electronics. Unpracticed gignes can release charges when startled or at random, and can often overload whatever they're trying to charge.

Two primary directives govern gigne philosophy above all else: seek knowledge, and, even more importantly, share knowledge. To gignes, the right to learn is just as important as the right to food or shelter, and to this end they make sure all gigne research is openly available to anyone who may wish to peruse it. If one wishes to learn more about a topic, they need only ask a gigne; they may not know, but they'll definitely be able to point to where one can start looking.

As part of this, gignes tend to be self taught in all of their skills. Gigne schools are both optional and free, and students are heavily encouraged to pursue fields of study that interest them the most rather than being told what to research by others. To this end, gignes maintain massive meticulously organized libraries where they are encouraged to go seeking information on whatever trade they wish to learn.

To gignes, withholding knowledge is one of the worst possible crimes, and to hide research from the public is a criminal offense on Tuxil. Gignes will quickly become angry if someone implies that they know something the gigne doesn't and then neither explains nor points the gigne in the direction of somewhere they could go find out for themselves. This rage doesn't extend to personal matters, but it can even seep into minor things like a joke everyone but the gigne is in on. This can sometimes result in the gigne prying into personal matters if they don't realize the secret everyone is keeping from them does in fact fall into the category of personal rather than anything else. Most gignes will immediately apologize and back off if this happens, but the habit can be unpleasant for others anyway.

In addition to the distribution of information, gignes also highly value modification and attribution. Rather than it being frowned upon, let alone illegal, gignes heavily encourage iterating upon existing inventions, software, and even fictional works, and then of course releasing the result to the public for others to do the same. The only requirement is to leave credit to the original creator (as well as to previous editors if there were any) somewhere near the credit for new modifications, which often results in long chains of attribution for older products.

Although gignes do not feel like any creator has the right to refuse to allow others to modify and iterate upon their work, they also believe no one has the right to remove the original creator from the credits, no matter how extreme their own changes are. To gignes, not only is this to prevent plagiarism, but also to allow anyone seeking to replicate what the most recent releaser of work has done to retrace their steps. This long string of attribution extends even to things like quotes; if gigne A tells gigne B something, and gigne B tells gigne C that gigne A said that, and gigne C goes to quote this to gigne D, who then goes on to tell gigne E, instead of attributing the quote like, "'So and so' - Gigne A", gigne D would instead attribute it as, "'So and so' - Gigne A, as told by Gigne B, who told Gigne C, who told me, Gigne D".

Gigne attitudes on knowledge and the distribution of such are reflected even in their religion. Gigne religion can best be described as monotheistic, but not in the way many would think when they hear such a term; gignes believe their god is always changing and evolving and updating itself over time, rather than staying the same, and that the version of their god that gignes worshiped 1000 years ago by now shares no similarities with the god gignes worship today. They don't see this as being a bad thing, simply the consequence of changing times. Additionally, while they believe in a single god, they also believe that this god has several "branches" which can be quite different from each other while still being part of a whole. In this way, gignes often end up incorporating other religions into their own, simply viewing other gods as branches of their own. Though they view their god as having a "master", or main/primary branch, there is much disagreement over which branch constitutes such. However, this rarely results in much conflict among gignes, as it is not considered lesser to honor another branch.

Knowledge is so precious to gignes that their most valuable possession is not any physical good, but instead their core repository, which contains all of their memories. If another gigne assimilates this after its original owner dies, they will gain all of the knowledge and memories of the deceased gigne. Due to their unique physiology, gignes are capable of placing their core repositories into robot bodies for better protection. This, however, is seen as selfish except under specific circumstances, as instead of allowing any knowledge they've gained over the years to be shared with others, they're instead keeping it to themselves just to live a little longer.

Gigne history is, for the most part, incredibly well recorded, as gignes keep detailed records of their own past as they do with all things. However, anyone actually checking a gigne history textbook would notice something strange right away - every single one of these records start quite abruptly in the middle of the gigne information age rather than with, say, the invention of writing the way most species' histories do.

The reasons for this are poorly understood, even amongst gignes themselves. Unsettlingly, for a species so focused on information and the preservation of such, there are no existing records from farther back in their past. Most gignes find this somewhat distressing, as even the earliest sources that are available shed no light on what might have happened. What is known is that gignes far closer to this sudden blank seem to have found whatever happened just as disturbing as their contemporaries do, but few sources are much more specific than that.

It was in this state that another species - thankfully peaceful - found the gignes, and so they were introduced to the rest of the universe.

Core Transfer: Gignes can leave their core repositories in their wills to be assimilated into another gigne, granting that gigne all of their knowledge and memories. To be granted a gigne's core is the highest of honors, and families often have long lines of assimilated cores.

• The gigne approach to copyright and redistribution is most often associated with software and the like, but a lesser known fact is the high status fanfiction is given in gigne society. After all, fanfic is just another way to take an existing work and iterate upon it, simply with fictional works instead of programs.

• Because of the unique way gignes look at education and knowledge, everything is extremely well documented. One can go to a mega library and check how people thought about a certain subject 500 years ago and then compare it to people's current thought on the matter.

• Gignes hate notails, as notails tend to hoard information for themselves rather than sharing it openly. To gignes, this is the root of their crimes, and the two species often quarrel at intergalactic conferences.

• Wikis are very popular among gignes for the way they make it easy to collaborate on articles about certain subjects, and then share it for others to make their own additions and clarifications and updates. One might expect these to be full of misinformation, due to anyone being able to edit articles, but the gigne moderators tend to be very diligent about catching vandalism.

• The gigne government is involved in multiple efforts to aid new species' introduction to the universe, shooing off those wishing to take advantage of the new species as well as getting them the necessary documentation to gain full species status. They also accept donations to help fund this endeavor, from both individuals and private groups as well as other governments. This list of donors is publicly available, though gignes will often note with distaste that it is incomplete, as some choose to hide any involvement with this project. To gignes, this is cowardly, but any requests for anonymity are respected anyway. 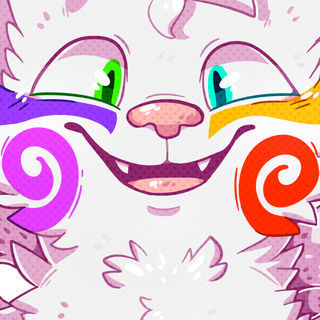 -Back to Species Menu-
< Geptad
Gnosis >