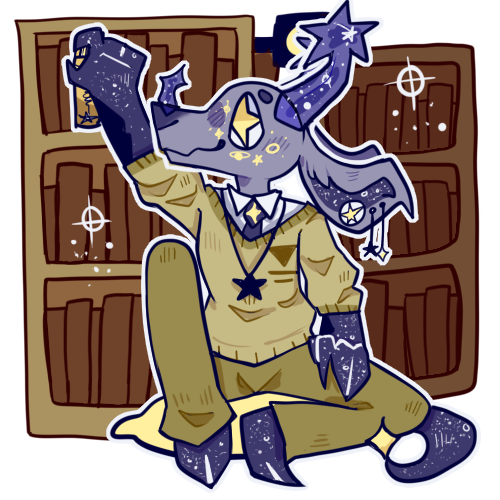 “I love forks so much! Forks are the best! They're definitely the best tool ever.” — Chálkino Piroúni, a fork loving sarax

Attack Method: Try and ram or headbutt the attacker, or impale them with one of their stingers.

[Competitive] Neutral trait
This character tends to be up for healthy challenges. If this character sees a co-worker or someone they see as a rival working harder than they are they may work even harder to compete with this person even if this person has no idea what they are doing or even if they exist.
[Passionate About X] Positive trait
The character has a strong passion for some area. They might know more about this stuff than others, or may perform better on tasks relating to this topic than someone else with equivalent traits and skills.
[Monomaniacal] Negative trait
This character displays an obsessive focus on a single thing or related group of things. It may be difficult to get them to do things unrelated to their obsession, and can be extremely agitated when their obsession isn't respected.

Sarax don't have a set god that they worship, as beliefs can differ wildly.

Their torso and head are covered in a light coating of fur, the natural colors that they are normally born with ranging from shades of brown, white, and black, though these colors are commonly bleached and dyed. Their arms, legs, and tail have a texture similar to rubber, and are always black, but can also be changed to another color with injections. In their forearms, their bone dips inwards for a black stinger, which cannot be a different color.

The stingers can be removed, though it is not recommended, as the pain of doing so can last for years.

On their head, they have a long snout in the front, and two ears in the back, which can be of varying sizes and shapes.

Most sarax are born with medium sized horns that are the same shade of black as their arms and legs, though these horns can be carved, changed, and replaced to fit a sarax's needs. A trend that have become popular in their culture is going to get their horns carved into a certain shape, some choosing to get them professionally done, and others doing them themselves. Another trend involving horns is actually getting the horns removed, and then making whatever shape a sarax desires with a mold. These molded horns can range from having the same texture and color as their original ones, though with a different shape or size, or to a sturdy, partially transparent material, which can have charms, bubbles, and other items suspended in the matter.

Overall, their appearances and clothes can wildly differ, as can their interests.

Starting from a young age, sarax are expected to choose something that interests them, and cling onto it. A few examples of what this interest can be is an emotion, a person, and even just a general aesthetic. Anything that a sarax finds interesting can be clung onto. The sarax will then proceed to mold their life around this interest, such as changing their appearance to reflect their interest. However, once and a while, a sarax will stray from these ways and will be recognized as being different from the normal sarax. Though while they may be treated differently and act differently, they are not a true subspecies.

Most sarax cling onto this interest throughout their life, though it isn't uncommon for one to switch once or twice.

Sarax are very competitive, especially towards those who have the same interest as them. When they meet anyone who claims to have the same interest, they will proceed to quiz the person on everything they know, capable of going on for hours simply asking to see if they're a "true fan". If someone passes their quiz, the sarax will commonly begin to hang around that person, chatting to them about their shared interest, and trying to form a strong relationship.

If one takes the quiz and fails, however, the sarax will claim that they're a poser, and shun them in someway. One way that a sarax can shun a poser is by ignoring them, and overall pretending like the person doesn't exist. Another way is by constantly pointing out how the victim isn't a true fan, and sneering at them at any chance that they get.

Sarax weren't always like this, there was a long period of time where the species was humble, though boring. They always did have a tendency to focus on a choice thing, such as a farmer being extremely attached to their farm or crops, though it wasn't until the sarax were introduced to the rest of the universe that they truly embraced their monomaniacal nature.

Surrounded by a plethora of new jobs and technology, the species was quickly overwhelmed. Sarax were scrambling to figure out what is it that they wanted to do, what their role in the universe would be, and soon began their craving to find some kind of an interest to find their place in society.

In the beginning of their establishment in the universe, sarax were only interested in jobs that they found important, or interesting, though this soon branched off into something more. Rather than jobs, sarax began to become interested in a certain item, then from there, some sarax became interested in abstract concepts and emotions. These advancements shaped the sarax into the species that they are today.

The sarax home planet, Fyrrn, is a place that has been transformed into an advertisement paradise. The majority of the planet is covered by a bustling city, filled with commercials and ads of body modifications for a sarax. Trends are quickly caught by those who want to commercialize them.

Everax: These sarax aren't only interested in one thing, they're interested in everything. They're not capable of focusing on one thing for long, constantly switching and expanding their interests. Their appearance is commonly over the top and confusing.

Nothrax: These sarax aren't interested in anything. They're distant and cold, normally due to some kind of trauma that made them this way. They commonly wear very muted or quiet articles.

Stingers: The stingers in the forearms of a sarax have enough venom to kill an aftik, though using them also kills the user. These stingers are extremely fragile and are almost always torn out of the sarax's arm after use. The stingers are connected to their radial artery, which is located in the wrist.

When the stinger is torn out, the artery is torn, and the sarax will begin to bleed out rapidly. The chance that the user could survive this, even with immediate medical attention, is rather low.

• Dressing up as fictional characters is very common in sarax culture, especially when a sarax is obsessed with a show or franchise.

• The longest a sarax has quizzed someone on their interest is for two weeks.

• Somewhere out there is a Bill Gale obsessed sarax. 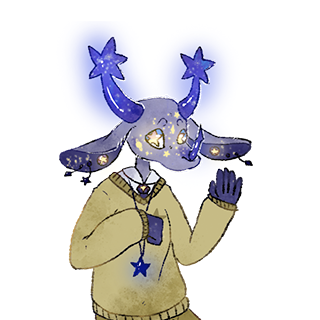