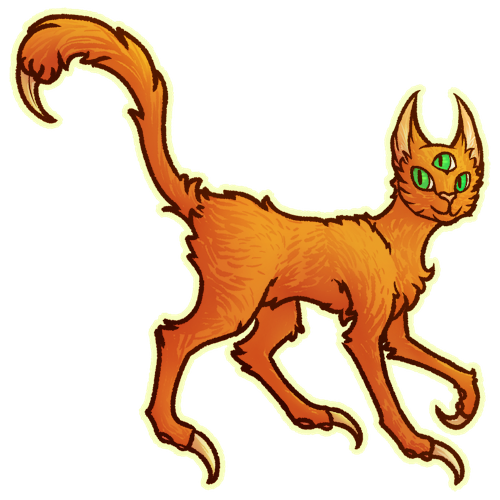 “One day, I was walking to the supermarket, when suddenly I heard a meow. It turned out the meow came from a spikmew that wanted attention! What an adorable kitten!” — An aftik citizen

Attack Method: Its scratches and bites it's target until it either defeated or dead. If the attacker seems too powerful it runs into the nearest hole to hide.

Spikmews are cats a that have a claws at the end of their tail and on each of their legs replacing where the paws would be on other felines. They use their claws to climb up walls, and create holes which they can hide in. Spikmews have third eye which is on their forehead between the other two eyes. This feature is used to keep vision to the sky, allowing them to dodge aerial attackers easier. The ears of the spikmew curl away from the face and point towards the center of the top of the head.

Spikmews lack the wide range of fur variations seen in other domesticated felines, instead all spikmews are of an orange hue.

Spikmews like to get attention of others no matter if it's one of their own or another species. They enjoy either tapping someone softly with one of their front claws or mewing repeatedly. If the person shows the slightest sign of annoyance or aggression while doing this they will flee instantly.

A spikmew without attention will slowly start to become either skittish or violent as it becomes more apparent that they must fend for themselves. Due to this, they like to live in crowded areas such as cities and towns. The ground does not limit their search for attention as they use their claws to climb up walls and ceilings on this vital mission.

Spikmews with owners will escape their homes as soon as no one is around and seek out "sub owners," people who they can relax with until their owner comes back. Spikemews have an impeccable sense of timing, and in only a few days they'll learn to come back to their primary home just minutes before their owner returns.

Expert climbers: Spikmews can climb on walls and even ceilings without problems. Spikmews can remain upside down on ceilings for a long time without issue.

• There is a popular image on the internet of a spikmew sticking its head out of a hole in the ceiling. This image has been edited and shared so many times that it has became a widespread joke.

• Spikemews must have an enclosed place to hide and rest. If not they will attempt to make their dens inside the walls of the home they reside in. Due to this, wild spikmews are considered a nuisance to homeowners. Thankfully many spikmews are not persistent and will flee an area with an angry owner and never return.

-Back to Fauna Menu-
< SPB
Squarmid >