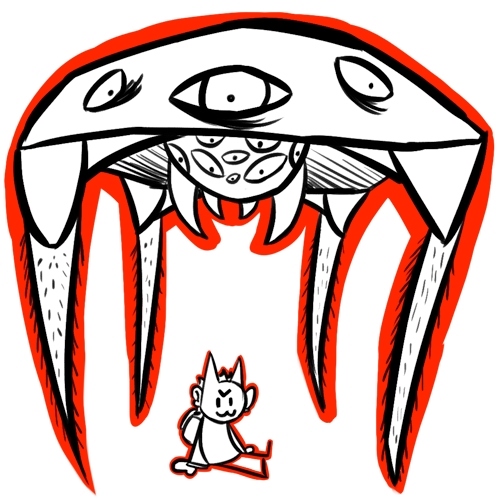 “It may seem silly, but one of the things that commonly kills kids out there is the lack of shelter. Now we turned one of our greatest predators into our savior.” — Notail's guide to picking a starter 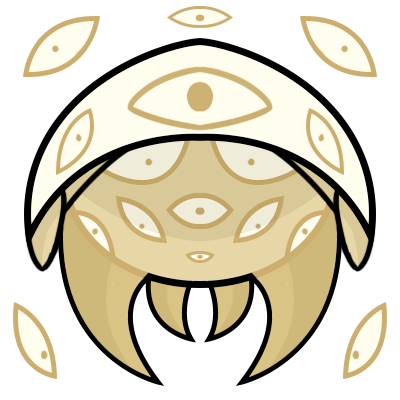 Danger Level: Low
Likes: Staying still, Meals being brought to them, Campsites
Dislikes: No one sleeping under them, Heavy winds

The tentider is a tall and large insect. While it is commonly called a spider, this is not the case. The only thing the tentider has in common with spiders is its rather long legs. The tentider can be described as an animated canopy tent; with its fairly thick yet flexible waterproof webbing and four legs, anyone under it is safe from the rain and sun. The legs of the tentider are covered in strong but flexible hairs that allow it to embed into the ground and stay there.

The top part of the tentider has a few large eyes on it, allowing it to see anything approaching the tent. The eyes do not track color, but are rather sensitive to movement and symbols. Under the "canopy" of the tentider is the head; this contains all the organs the tentider has. The head is just one large mass with the tentider's feeding parts and many eyes visible. The eyes of the tentider seem all randomly placed on its head, though it will always retain a 360 degree vision.

The legs of a tentider will always be black, but the "canopy" or webbing of the tentider will commonly come in black, greys, or white, with some being bred to have different colors, and even patterns.

The common tame tentider of today has been bred from its ambush predatory brother, the wild tentider, which had long arms to grab and stab anyone who went inside it for cover. The tentider of today lacks these arms, and other than kicking things it doesn't understand with its long legs, is completely harmless to the common notail.

Tentiders are extremely large creatures who are unable to fend for themselves and thus have formed a mutual relationship with notails. Notails hunt, and then use a large stick to bring up food for the tentider, the tentider in response does absolutely nothing, as tentiders do. There's nothing a tentider needs to do other than dig its legs into the ground and exist. A tentider can either be canopy tent style, or if it digs its legs all the way down it becomes a traditional tent. Its hold on the ground can survive fairly mild breezes, but in extreme weather the tentider might fly off if not careful. The tentider can also semi rollup to become a rather big sleeping bag, but it's not recommended to sleep next to the commonly hungry head.

The tentider is commonly offered to the L-andlord, E-xplorer, and H-erbalist class of notails. As the tentider is rather huge and can protect more than one notail, while also requiring just enough food that one notail can provide normally if they spend all their time hunting, the tentider teaches the notails who pick it to become managers of parties. Commonly E-xplorer, and H-erbalist notails will use a notail who has a tentider as their home base. The notail who controls the tentider normally must keep track of going-ons, as well as being ready to tell everyone else to pack up and move when situations are looking unsuitable for living and feeding the tentider.

L-andlord notails on other other hand use the tentider to attract "tenets" to live under it, with the payment for living under it being food for them, and their tentider, as well as other goods. Commonly this class of notail will set up more permanent camps and mantain the location around the tentider to attract people to live under it. Unlike other tentiders who are sterile, L-andlord tentiders have one to three children a year, and if the L class can raise and feed it to adulthood, which only takes a year, the tentider can be added to their group for others to live under.

Notails who take on tentiders are more sociable than the common notail. They are also more judgemental, from their days of trying to make sure that the people who they hosted under their tentiders would be drama-free and also good workers. As such, while these notails make more friends than the common notail, they're also more picky with who they associate with. These notails tend to be fairly good at job management.

Once out of the woods the tentider tends to stay around its owner for the rest of its life, if it is not tossed right away. E-xplorer, and H-erbalist notails find that tentiders are useful enough to keep, while L-andlord notails get rid of their tentider almost immediately; after all, the tentider was just practice for them. The apartment they'll be learning how to take care of won't be required to be physically fed food.

In quite a few places in the universe tentiders have become popular for renting out. After all, the tentider is a perfect tent to bring when you're not totally sure where you want to camp.

Wild Tentider: The wild variation of the tentider is fairly rare, but still exists, even spreading to other planets as an invasive species. The wild tentider only comes in greys, and rarely black. Like the tame tentider, the wild tentider provides protection from the elements, and creatures small and large enter or run under it for protection. What happens next is what separates the two. Unlike the tame variation the wild brother of the tentider still has its long arms, which it shoots out to stab anything that gets under it, before bringing them in to feast on a meal. Some aggressive pranksters have been known to release these wild tentiders into campsites.

Fancy Tentider: A fancy tentider is a subgroup of tentider which has been bred to have different colors and patterns on their canopy webbing. The eyes of this tentider is extremely uniformed unlike normal tentiders, and there are only four eyes on the canopy area, one for each side.

Warning cry: When a tentider sees anything that could be a threat to it, it will release a high pitched cry in an attempt to scare off the threat and warn its feeder to run away, or call its feeder to attack. The cry can be heard from three miles away.

• The first wild tentider was bought for a rousing three points. Its name was pepis, which is now a common nickname for tentiders in general.

• Many people seem to personify a tentider, claiming they love to be pet or played with. Science has shown that tentiders actually dislike being touched, and doing these things may in fact lead to a kick in the face if the tentider gets annoyed enough.

• If food is plentiful tentiders allow others of its species to group around it. If food is scarce then people may watch "tents" battle out for prime spots from a distance.