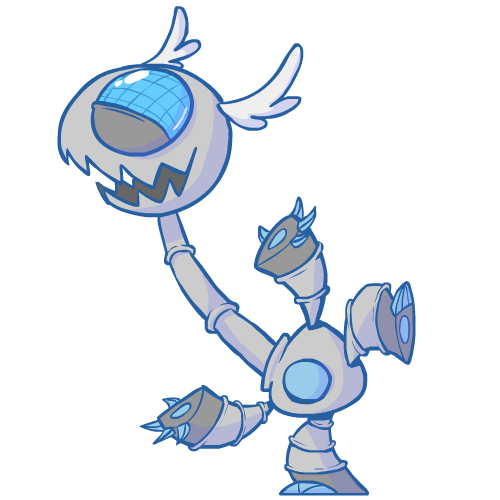 “The heavily Delphik population here leaves Svarinth with a dubious honor. It has the highest density of couples thereapy clinics out of everywhere I've visited. And in my opinion, they still don't have nearly enough.” — Field Notes by Madero Scadero

Common Jobs: Engineer, Designer, Artist, Matchmaker
Likes: Working together, Combining things, Sharing ideas
Dislikes: Lone wolf" types, people who think multi-headed beings can't get along, that look people give them like the person is thinking about what they might have done to be stuck here listening to them talk. It's very rude also they've only been talking for 20 minutes

Attack Method: Flail and / or run away.

[Collector] Neutral trait
This character has a collection of items or does lowkey hoarding of random objects they find. They are more likely to pick up just about anything they find and check it out. If an item is removed from their collection without their approval they may become minorly distressed.
[Inventive] Positive trait
This character is able to easily come up with new ideas and may be able to lessen the cost for current items. In a tough situation this character is likely able to use simple items to create make-shift weapons or items.
[Boring] Negative trait
This character is just boring to be honest. Nothing to see here. Most people will lose sanity just hearing them drone about a subject.

Delphiks honor and respect most gods but hold a special place for gods who work towards helping people and improving the whole universe.

The delphik is somewhat insectoid and humanoid in looks. They have a pale exoskeleton as well as a compound eye on each head. They are commonly 6 feet pre-merging, although most of that height is their neck.

Three headed delphik can result from 3 delphik merging at once, but this is a rare occurrence and can often lead to medical complications. Five and six headed delphiks can be made from a variation of this.

Delphiks are a peaceful race, never resorting to violence unless absolutely necessary. Their goal as a species is to unify what once was separate until the universe has taken its most perfect and efficient form, and so will often suggest ideas for what can be improved through combination, sometimes even acting as matchmakers for other species.

A large ship crashed on the delphik homeworld during an exploration mission, and when the crew awoke they found that the ship was fully repaired. In fact it was even better than before, infused with delphik technology and metals that greatly increased its capabilities. The crew decided to take a few delphiks back with them to demonstrate how useful they were. The crew thought; if they could do that to the ship, think what they could do for all of galactic society.

The delphiks had ideas. Galaxy-changing ideas. Too many galaxy-changing ideas. By the time they were halfway to their destination they could no longer stand the delphiks' constant suggestions, and proceeded to send them off in an escape pod back to their homeworld, hoping they would never see another one of those infernal multi-headed bugs again.

From that escape pod the delphik made a mining ship, and with that they gained the resources to make more, and then make exploration ships, and finally colonization ships. Before they knew it the delphik were a part of galactic society, and they were there to stay. However, like the crew of that initial ship, most species can't stand the delphik's incessant suggestions, and few crews will take them.

• Delphiks can "smell" the natural lifespan of most species, an ability originally developed to be able to tell the natural lifespans of other delphiks and help find a merging partner. Few species are interested in knowing when they'll die, but this ability comes in handy when making new hybrids.

-Back to Species Menu-
< Datos
Deltine >