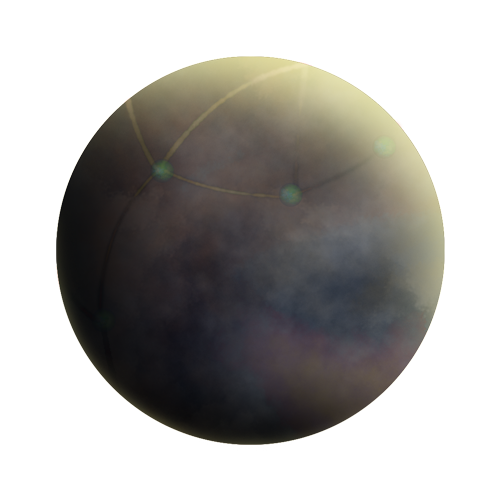 “I came here on holiday and nearly died, and all the plants in the nature reserve were dead so it wasnt even worth it” — Chief Gardener Ajax Felixes

Smoltek is a small world with slightly lower gravity than normal. It is notable for having an atmosphere which is incredibly toxic to most species, as well as the choking thickness of said atmosphere. Despite its official designation as a "nature reserve", the natural life here is hardy and crawling in the smog-filled rocky wastes that make up most of this planet. Only a handful of imported fauna survive here, such as the cloud gulpers which soar through the hazy skies, and the blood mantises released by accident.

Smoltek has little history itself, but is notable for being the site of one of the biggest scams in navigational history, when the discoverer managed to sell the planetary rights to a "Unique and diverse bio-ecological wonderland" to a viedafo conservationist group, before vanishing with the very large amount of money they gave her. Now only stubborn employees of that group and people who don't want to be found by the police live here.

The conservation park: Angrily kept clean by the employees, who regularly plant lovely trees in their airtight compound, plant trees outside which then die, and then watch movies all day. The conservation center itself is musty, huge, and spookily empty but regularly cleaned by the staff. This place is the safest area on the planet, because they don't charge for gas masks and the parking is reasonably priced.

Survivalist bunker: This bunker is still mostly sealed, although one might get sick if they hang around in the hangar. It's listed as "inhabited" officially, but nobody's heard from the sole resident in weeks.

Shipwreck: A wrecked Zeus ship lies in the middle of this desert. It's rumored that there's fuel left inside - and as long as a would be looter has a mask or don't breathe, whatever is left of the cargo is theirs for the taking.

• We're not joking, this planet's atmosphere will be fatal to basically any species that breathes it in a few minutes. Don't go exploring if you can't get around that somehow.

-Back to Planet Menu-
< Shearattle
Snowdown >