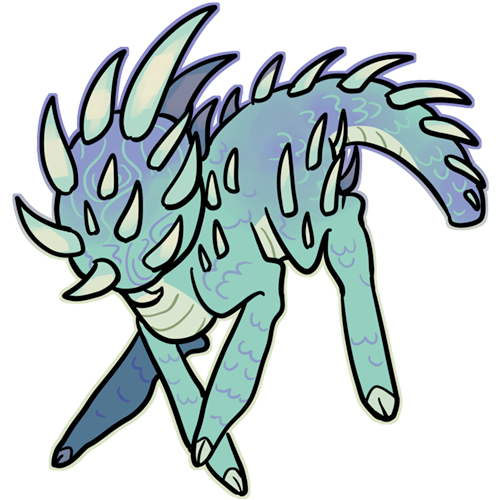 “A thorn head isn't for kids who are looking for a friend, a thorn head is for children who want to SURVIVE. A thorn head is loyal, emotionless, and useful. The type of people you want to associate yourself with.” — Notail's guide to picking a starter

Danger Level: High
Likes: Following notails around, Being ridden around
Dislikes: Having no one to follow, Other thorn heads and large pets

There seems to be no mouth to a thorn head to people who are unfamiliar with them, the head looking like nothing but an unusable mass of flesh covered in spikes. The moment food is offered to a thorn head they unfurl their mouth from their head, like someone who has sucked their lips into their mouth and is now releasing it, and with a powerful suction they bring in the food, rabidly furling their mouth back up. Many compare the thorn head's mouth as a cookie cutter as thorn heads only have a circular ring of teeth around their mouth, which if the meal is too big they will "cut out chunks" of the flesh over and over. This movement is described as a kiss as it appears to bystanders that the thorn head is kissing their prey. As thorn heads are unable to chew they must do this to be able to eat.

The namesake of the thorn head are the large curved spikes coming out of each thorn head. These spikes start from the front of the head, down the neck where they get larger, down the back and shoulder where they start reaching their smallest points, finally reaching the back thighs and ending at the tip of their tail. Known as the "Sharp Horse", the thorn head is impossible to ride without bodily injuries unless trimmed on a weekly basis, a task that can take hours at a time depending on how many of the spikes need trimming. The spikes grow at about a rate of one inch per two weeks.

Thorn heads are fairly unremarkable in how they act. Thorn heads have been perfected to the point that the only thing needed to befriend one is to find one without an owner and offer it food. Some thorn heads that lose their owners will even seek out others and instantly bond to them, following them around to the distress of the unwilling owner. Thorn heads may accidentally maul any other creatures who get near their owner, believing them to be attacking animals, as such thorn heads are highly not recommended for owners who plan on having other non thorn head creatures.

Thorn heads have fairly basic eyes and hearing, slowly mutated from when the species lacked such things. The eyes and ear holes are fairly hard to spot without knowing what to look for. Notails who have thorn heads early in life are known for making themselves as visible as possible, both in speech and physical visibility, such as holding a wider stance. Both of these things are caused by thorn heads bad sight and hearing, for if a notail child doesn't make sure that the thorn head doesn't know where they are they may end up accidentally trampled or ran into, something that can quickly lead to death due to the spikes. Owners who do not learn to take center stage while working with their thorn heads will quickly find themselves covered in wounds. One cannot feel weakness for even a moment.

While following a their owner thorn heads are extremely obedient to commands and fairly easy to tame, they don't even seem phased at all by being ridden for the first time. Of course to ride a thorn head, one must trim away a fair amount of the famous thorns. In the woods of the notail lands children are taught that while their thorny companion makes a fair steed, the true reason to have a thorn head are for these thorns. By carefully trimming away the thorns notails can make tools, traps, and weapons to hunt and fight with.

Thorn heads are commonly offered to F-ederal, J-udicial, Q-uarantine, T-reasurer and Y-eotail class of notails as their starting creature. Notails who take thorn heads are known to be more watchful, always keeping an eye on things near them or trends. Not many notails who take a thorn head are caught off guard cause those notails have already learned from their companions that everything is one strong breeze away from being nearly trampled. These notails also seem to share lower care for other people, seeing many people, like their own companion, as a tool to be used and harvested from, not a friend. They are rarely emotionally manipulative, learning that a strong voice and a powerful stance can even cause the biggest of razor sharp steeds to kneel, no need to toy with emotions.

Sadly for many thorn heads, after following their owners for years, they commonly find themselves being fought against other creatures in the ring. Their owner, once again seeing them as nothing but a tool.

A tool who no longer has any worth.

Wild Thorn head: Wild thorn heads aren't as wild as they used to be, now just residing in zoo herds and in the private creature enclosure of huge thorn head fans. The wild thorn heads have no eye sight, are unable to hear, and can only feel their way around the world via vibrations. These thorn heads attack nearly anything around them, normally doing test bashes to check if the other creature is a thorn head like it is. If it's not then there will be no mercy.

Naked Thorns: A specially modified version of the thorn heads, the naked thorns are actually lacking their namesake thorns, and have better eyesight and hearing. The species is often criticized because it is as simply put "Just a stupider meat eating horse with worse eye sight" rather than being an improvement on the species. This species is fairly expensive for its rarity.

Sensitive Thorns: While the eyesight and hearing of a thorn head is incredibly poor, they are fantastic at feeling vibrations due to their sensitive thorns. Thorn heads commonly just stand or lay down when idling around, sometimes suddenly leaping up to go chase down what they believe is prey. Very young thorn heads sometimes end up chasing the wind, causing them to be quite the thorn in the side of the just as young owner.

• Unlike most creatures thorn heads are disallowed from free roaming when their owner is away, as they are a danger to other creatures.

• The most famous thorn head owner is O-6, though he has never owned one since his starting creature. There seem to be recovered reports that O-6 did poorly with owning a thorn head, apparently coming out of the forests with many cuts and a thorn head that barely listened to him. O-6 says all these reports are slander and that his thorn head was perfectly trained. 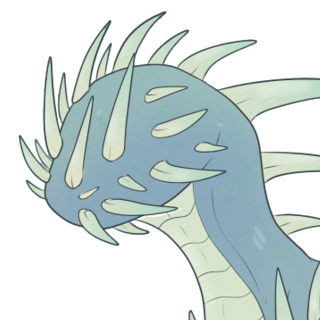 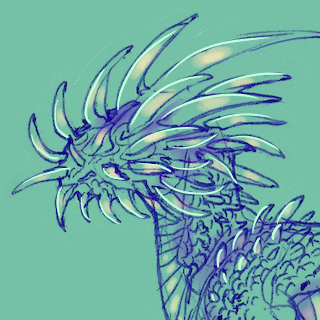