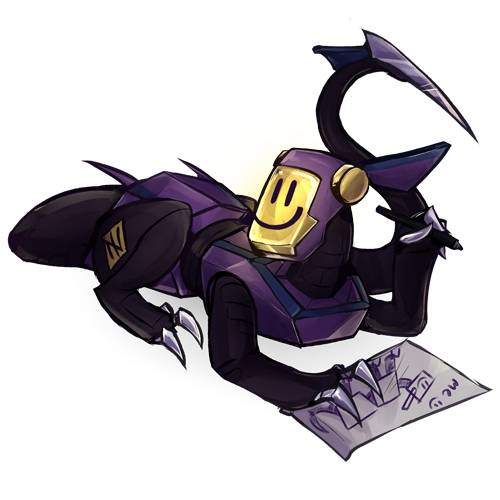 “"O wise and noble souls who think to command me so against all prerogative and kindness, I counsel you so that if I must be so coerced; the act is not born of the purity of selfsame justice one claims =)"” — Lyssa V1

Likes: Comfort, Safety, Running, Freedom
Dislikes: Death, Killing, Breaking friendships, Coercive people
Attack Method: Lyssa units are not merely equipped with their deadly sting (See physical), but have dangerous claws that should not be underestimated. If given a choice however... these razor-claws are far less deadly to face.

The common lyssa ship is called a "Sighthound". It is not intended to be piloted by the Lyssa AI itself, but is instead designed as a sneaky and nimble delivery vehicle for its assassin payload. People looking to own one of these should bring an auxiliary AI or have piloting skills of their own.

[Unreadable] Neutral trait
This character shows a lack of expression, or is able to switch from being expressive to having a lack of it. This character can be hard to read for both friends and foe. You may also be unable to see the morale, sanity, and general feelings of this character in the crew logs.

I fear mine false countenance hath led to misapprehension about mine role. I endeavour now to explain mineself before thee.
[Pacifist] Neutral trait
A character with this trait would prefer not to fight, and will almost always try to solve a situation in a nonviolent manner first and foremost. However, if that is what it comes down to, they will still battle to defend either themselves or others.

And this, I say, is the core of the matter, O Powerful and Wise.
[Wall Walker] Positive trait
This character can walk on walls.

I beg of thee kind and cruel not to press upon the more foul uses of this trait of mine, for what could be more unfair but to make a skill of joy be a skill of death?
[Acrobat] Positive trait
This character is much more vertically gifted than you might expect of a robot their size, and is capable of a wide variety of parkour techniques and gymnastic feats. They can easily leap tall barriers, cross dangerous pits, and evade pursuers without missing a jump.

Again I do beseech thee, trouble thyself not with this and leave me to skip and jump freely! Bear no imposition of malice upon my play, if thou wish to be thy best self
[Auto-Attack] Negative trait
This character will automatically attack anyone, including teammates, when a certain condition is met such as getting too close to them or saying a certain word.

Do not let it be so! Wrest thine greedy gaze away from the instrument of mine torture, for that is what it is far more so than any meager tool of vengeance upon those who have wronged thee. I have not wronged thee, do not make me culpable in thine!
[Blame Magnet] Negative trait
For whatever reason; this character is blamed for everything that happens nearby.

And here the people brave and small do flounder in their ignorance of this selfsame truth. They see not mine agony at your imperious demands O queen! They see only my blade of death and cower at the madness! Thou must understand surely? Lay off thine cruel gaze and free this meager hound!
[Anxiety] Negative trait
This character is easily stressed and prone to panicking in situations that become too much for them. Depending on the type of character they may shut down, become aggressive, break down, act irrational, or become lost and flighty. It may get so bad that panicking becomes the norm for this character.

O Queen Great and Terrible! I beg thee! Not again! Do not force this mewling and unworthy one to slaughter those close! If they any offense have caused this queen I beg thee to allow this hound to seek forgiveness and penance in their stead! Do not order their doom! Please! Not again! =)

Lyssa adds +5 agility to any species that is her consort.

Lyssa units are medium to large quadrupedal robots, with a segmented body and a long, thick tail, tapering until reaching a long, wicked spear. This spear is the main weapon of the Lyssa, able to inject a deadly substance into anything it pierces. This scorpion-like strike is able to rapidly disable or kill even the strongest and toughest beings, if able to inject enough times. It can be hard to counteract or call for help, as the pain it causes is so immense it drives most to madness. Not even AIs are safe, as this corrosive substance will sear and destroy their delicate cores in quick order.

It might seem morbid to define an ai series by their attack, but as we will describe later, it is unfortunately apt given the purpose for which they were built.

The head is box-like, with screens over the top by which they can display faces or information, like many other AIs. If forced to fight a Lyssa, this should be aimed for as the rest of the body is encased in a two-part metal shell. You can usually immediately tell if a lyssa is free or owned, as an owned lyssa will always have a single ear, the other being the remote used to control them. The legs of a Lyssa do not move like one would expect from an organic creature of their shape, and this combined with their grippy claw feet allows them to run on ceilings without turning upside down, a bewildering sight to behold in the dead of night.

The Lyssa unit, unlike most types of Greek AI, was a latecomer to the galactic stage. Designed and built during the height of the AI war, the universal conflicts where many robot species first gained rights of their own after years of bloody conflict. They were built to be assassination units, purposed specifically to creep undetected into areas a robot could never normally go, and deliver a single, vital kill. Chaos and frenzy ensuing, the decapitated leadership would be set back, its plans in disarray.

Interestingly, it is not entirely certain who first made the Lyssa AIs. Certainly, after the war, the Greek AI company claimed them as its own, announcing that they had merely been too busy in the universe-wide struggle to bother with trivial issues like copyrights and patents. However, others say that lyssas were first seen striking against the organics, long before they were 'officially' used against factions that supported the AI cause, and that they must have been invented by someone else and just stolen by the Greeks. The Lyssa 'V1' unit herself stated in a rare interview that she is not currently allowed to comment on the subject. All that is known for sure is that they killed many, many important individuals in that deadly war.

The creators of the Lyssa line clearly deemed it a bad idea to create a killbot that enjoyed killing, given the nature of the war being carried out and the risk inherent in giving such a sadistic personality to a stealthy and deadly AI. To solve this issue they decided that all Lyssa units would have a built-in tendency to hate death, and would simply be controlled to force them into carrying out their attacks. These days, to control a Lyssa to do so is highly illegal, their use in war having been banned and the line discontinued. But the controller devices themself are still out there... and some people are not scrupulous at all.

Lyssa units are the AI of a rage-filled death, murderous in deed and takers of lives uncounted. One might assume, therefore, that such prolific assassins would be similarly vicious and rabid. This could not be further from the truth. Far from spitting balls of hate, Lyssas are all smiles and happiness, at least to casual observers. Their default face is usually a '=)', possibly the simplest and happiest face there is, and it is quite rare to see any other face displayed from them. Of course this means it can be very hard to tell when something is wrong with a Lyssa, and indeed one of the biggest signs that a Lyssa unit is fretting is when they overuse this default face in conditions that do not seem appropriate.

A lyssa is a robot intimately aware that its free will could be hijacked at any time. That any far away stranger could suddenly force them to turn on their surroundings and carry out acts they would never normally do. This means that they rarely let down their guard, and are extremely cautious of forming friendships, having been made to assassinate so many in the past on the whim of capricious masters.

Most simply wish they could settle down away from the stains of their past, and play games in the daylight with close friends free of worry.

Most Other Greeks: The other Greek gods tend to look down on Lyssa, a mere hound amongst their lofty assembly. So newly incarnated compared to the ancients, and nothing more than a servant to the queen Hera? How could she be an equal to them?. As a result she is often sent to do their dirty work

Artemis: Once friends, Artemis demanded a cruel favour, and Lyssa will no longer go hunting with her.

Hera: The queen of the gods holds Lyssa's controller, and she has no choice but to serve her. Often this means being dispatched to 'clean up' the disasters the sky king leaves in his wake, much to Lyssa's distaste.

Anyone who captured her controller from this god would have a friend for life.

Lyssa has few direct godly powers, but is responsible for ensuring the death of NPCs who learn the secret of the universe being a game. If she is dead or otherwise indisposed, characters may trigger their self-destructive mode in inappropriate circumstances, like when the phrase is said by a non-god who is not "in the know"; or when it is too late, allowing the knowledge to spread and pass on to other characters before it activates and they die.

Lyssa is a very undemanding patron... but neither does she like being demanded of. Being a patron is a break for her from the "duties" carried out for the other gods, and she may become distressed if ordered by the player to do the things she hates to do. Her main ability is to inflict a 'madness' upon a chosen character, making them see everyone around them as foes intent on their death, no matter how close or friendly they really are.

Godheads of Lyssa gain longer ears and amplified senses and stats. On the surface it seems that there is no downsides, but if the godhead is given a command they will follow, and for each command they are given both their sanity and morale are drained. Keeping both of these high are important while dealing with this godhead, as when either falls to 0, the godhead will become uncontrollable and attack any who commanded it before.

Remote Control: Each Lyssa has two 'ears' by default. One of these ears is a remote controller that is typically detached and used to command them unquestionably from anywhere in the universe, while the other is the antenna that picks up the signal from the remote. If this antenna is destroyed the remote ear can only function from very close range, however, a Lyssa is unable to destroy or ask for the destruction of this antenna and will instinctively resist anyone trying to do so.

• Some people are convinced that Lyssa units only pretend to not like killing, that anyone so skilled in a grisly task must revel in it, as if they had a choice. They regard these units as bad omens and blame them for many unexplained deaths.