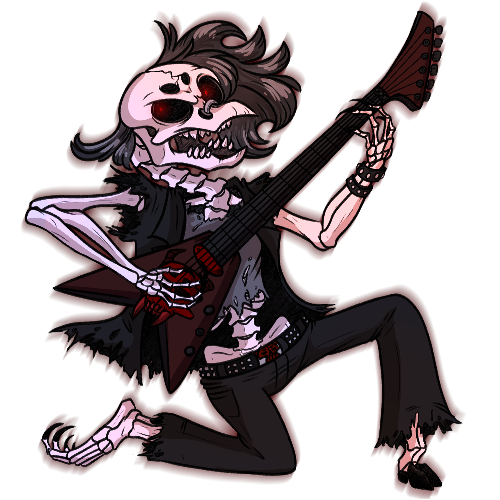 “I feel fine.” — The last spoken message of an axamola before death.

Attack Method: They will bash and/or stab the attacker with a nearby blunt object until death.

Axamola do not believe in a god.

Axamola are bipedal white skeletons made of many different bones from many other species. Despite their body being that of a skeleton, the bones are fairly flexible, allowing it to act as their muscle. What is universal to all axamola is their guitar with strange runes on the side.

The guitar strap has a pin that is stuck into the back of the axamolas neck, and if removed, the body will collapse into a pile. The organs of the species are located inside of the guitar.

Very little is known about this species true personality other than that they are rough and aggressive. Obsessed with murder and the genocide of the entire universe, they are very dangerous, and it is recommended to avoid them at all costs. Despite wanting to kill everything that moves, they enjoy listening to music. Slow moving songs will make them pass out for two to five hours.

As a child, the parents of the axamola will train their children to fight until they defeat them in battle. When this happens, the child has become an adult and is now able to become the leader of the family or leave and create their own. If there are multiple children, a battle to the death will begin, with the leader being the victorious child.

When axamola die, their organs will dissolve, and the empty guitar shell is traditionally given to the family of the axamola as either a prize or a mark of shame depending on what caused the death.

The axamolas early history is unknown. They are one of the newest species to reach the space age and they want to make up for lost time by conquering an entire galaxy. They don't care which one of the two trillion they take over. One day when a unsuspecting ship arrived on their old homeworld, they murdered the whole crew and went on to attempt to destroy a small town on a nearby planet. They succeeded in their plan, however they were stopped by the police after a large week long battle.

This incident caused the axamola to not be looked well upon across the universe. They were banished to a nearby junkyard planet. Originally, they planed that the axamola would die out, the problem is, the axamola adapted and survived longer than expected. Eventually, the axamola had made it out of the planet, creating makeshift spacecrafts from spare parts and broken ships lying around. Most travel the universe, looking for planets to take over. Most were killed when they were found on these planets, while others were "tamed" and integrated into society.

Musical Taste: If an axamola hears any piece of music, they are automatically able to identify the song name, band name, and year of release as long as they have heard the song before.

• An axamolas guitar is very valuable, with one being sold on the black market for very high prices.

• Despite having visible gaps where eyes and ears should be, the axamolas seem to see and hear things fairly well.

• Many axamola love to wear capes, feeling as if it "makes them look more powerful."