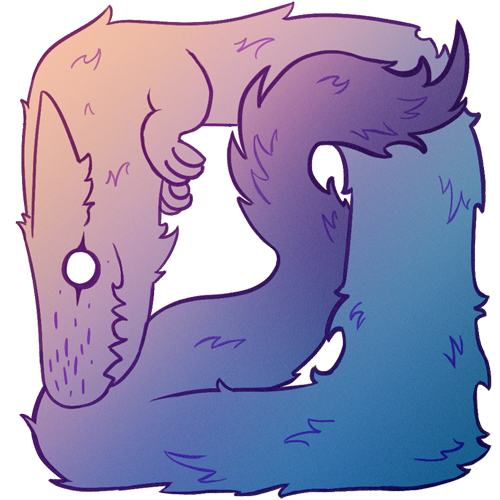 “You couldn’t believe your eyes when he came back home for the very first time.” — Opening line to "The book of Blorts"

Danger Level: Medium
Likes: Looking at people, Barking, Generating in tubes, Causing reality to melt, Dying
Dislikes: Being looked at, The numbers 326, 13930, and 0.577

Attack Method: Blorts react to violent stimuli by shifting around to look into the eyes of their aggressor, massively increasing the chance of a detrimental anomalous event triggering. Should nothing happen, the attacker covers their eyes, or the event actually assists with the onslaught, the creature will fall back on bites and sucking out blood.

The second the assault on the blort is stopped, the blort freezes in place, mouth opened as if surprised. As the other party moves, the blort will twist its neck and head to keep its eyes on them, suddenly returning to its usual self as soon as the person is out of sight. Blorts are considered all-forgiving and all-revengeful, meaning it will not treat the person differently next time it meets them. Should the same person attempt a second attack, the blort will become far more violent than before.

Environment: Anywhere a tube can be found, including inside bodies
Lifespan: Indefinitely
Size: 2 ft tall, 10 ft long
Diet: Anything, sometimes even including nothing

A strangely artificial appearing being. Their serpentine body has the feel of memory foam, while the fur it is covered in ranges from bald to thick. Blorts have a wide variety of coat colors and patterns, with the most typical coloration ranging between shades of grey to flaxy browns. Their ears are false yet detailed, as if created for the sole purpose of fooling others. The creature has two sets of true earholes. One sits behind the eyes before the head and neck meet, and the second is found inside the blort's own chest cavity, though why it needs to hear the inside of its own body is up for debate.

Their pointed snouts end in a waxy, whiskered muzzle containing serrated jaws in the place of true teeth. This jaw is the only "solid" piece of the blort. All other bones are closer to cartilage, allowing the animal to be twisted and crunched with no ill effects. Their flexible bodies are suited to squeeze through any number of confined spaces, as long as their heads can fit.

This body can grow to unusual lengths, with the tail size correlating directly to it. Some are small enough a microscope is needed to see them, while others can wrap around a mountain several times over. Surprisingly the body of the blort is, in most cases, completely hollow, and while they eat, the food merely sits inside their body until it vanishes without fanfare.

The amount of legs a blort has is the defacto defining feature of the fauna. Newly generated blorts manifest with zero or two legs. At random intervals of time specific to that blort new legs will appear correlating to how powerful the blort is. Removal of legs will cause a speedy regrowth that is completed within four days. Theoretically, it could possess an indefinite amount of legs, but with each new leg comes an increased chance of sudden unexplained demanifestion.

Demanifestion is an act where the blort disappears from existence, never to be seen again. While this presents itself in many ways, the most common is via fading away or spinning in place, growing shorter and shorter until nothing is left but a feeling of loss. Mindbogglingly some blorts have been located with large amounts of legs that disappear over time. This suggests that either the blort has manifested with these legs, which has never been recorded, or that there is a limit to the amount of legs blorts can obtain, and once the limit is hit, it begins losing them. Once these monumentally rare blorts lose all of their legs, they begin to imploded, suddenly growing smaller into a single point before either exiting existence itself or becoming so small no device could ever hope to keep track of them.

Despite all their oddities, blorts strike a chord with pet owners. Whether it's their glazed-over eyes, their barks that sound as if prerecorded on an aging cassette, or their endless loyalty to those who stand by them, blorts are here to stay.

Not that anyone would have a choice in the matter.

No one can ever hope to fully understand the behavior of the blort. Their movements are clumsy and haphazard, often tripping over their own feet. Some decide to forgo classical walking by slithering on their bellies. As dictated by their all-knowing yet all-stupid nature, they roam with an intentional aimlessness, rarely trekking through the same path twice. Their quest for knowledge leads them to rummage through belongings, and their hunger leads them to trash to consume.

Conditionally immortal, these strange beings cease all movements and sign of life when they sleep, entering a state of death. They are able to stay dormant for decades in any environment and any temperature, even those that would destroy them when alive.

Blorts have only been seen manifesting in tubes or tubelike structures, big or small. From humble sleeping bags, to hallow trees, to the arteries and intestines of a living person, and even inside incubation tubes, blorts can appear. In the latter case, the blort will engulf the child being formed and upon testing, despite its total blort appearance, will be genetically similar to the parents, to the point of taking on traits such as coloration or hair thickness.

This attraction to tubes follows them past their manifestation even. To name a few examples, blorts can be found invading music rooms to lap at large horned instruments or breaking into restaurants to touch upon the surface of each cup. 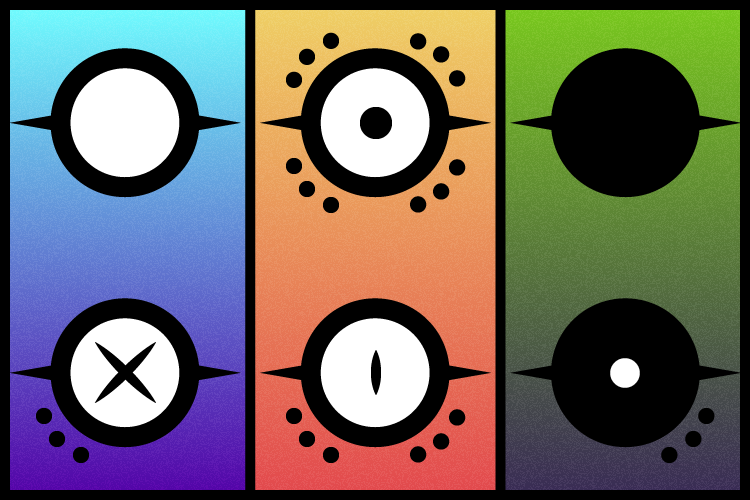 Art by Atomic
While the first type is the most common, blorts have many types of shapes and sizes for their eyes. It is believed that certain eye types may indicate certain effects.

Blorts, and their more popular subspecies, the dog, have been domesticated, as much as one can domesticate an anomaly. They have found widespread usage in hunting, detection of other anomalous events, scouting, and companionship, as strange as it may be. Immensely loyal, they can remain motionless for weeks on end as they await an intruder. Blorts whose owners have died will follow the body through all steps of the process, gazing directly in the location where the owner's eyes are (or should be.) They do this even if their owner is buried and, after a few weeks, will either rapidly demanifest or return to a wild state.

The primary way blorts communicate with the world is with their glossy dead eyes, but looking into them is not recommended. When viewed, an anomalous event or hallucination has a chance to occur. Examples are, being surrounded by sparkles for a couple of hours, sudden unexplained death, extreme hunger for meat, extreme thirst for a fruit that has gone extinct, sudden inspiration to depict a blort via an art form, believing someone has repainted your walls without your consent, forgetting the blort existed but feeling a sudden need to shake your leg, and an endless amount of other effects.

In 95% of cases, a view into the creature's eyes will cause a loss or gain of knowledge on a random subject, person, or location. With their need for knowledge and stupidity, it is assumed that the blorts only desire a transfer of information.

Weird as they are, the blorts are greatly beloved by those around them. "A blort is like a fond forgotten memory. You don't want to forget it," many remark.

Art by Atomic
Blorts are usally hollow, but some, especially particular blorts, may have other objects within them. Some of them, shockingly, have smaller blorts inside.

Even after demanifestation, the memory of the blort remains. If one remembers their blort with all their heart in the quietest of nights, it will appear before them for just a few seconds.

While it is just a hallucination caused by viewing their eyes ages ago, seeing their friend once again is more than any owner could wish for.

Dog: Most people do not know that dogs are, in fact, a subspecies of blort. When a blort becomes four-legged, or any amount of legs to the power of four, a blort becomes stunted in growth and mental blind. In this state, they cannot grow more legs, organs start to generate in their bodies, and they become more responsive to the world. No longer all-knowing or all-stupid, these blorts are freed from the shackles of knowledge and no longer cause anomalous effects. All dogs who have offspring will have more dogs, with a blort manifesting in only rare cases. It should be noted that 60% of all blort manifestations will become dogs.

Peculiar blorts: Under certain manifestation conditions, blorts will be affected by the "concepts" of an area. Blorts spawned in powerplants are fibrous, covered in blue, red, white, and green stripes, and are filled with wires that can be removed with no ill effect. Those that appear in pickle jars are bright green and taste of salt. These are only a handful of examples, and more peculiar blorts are being discovered monthly.

All-knowing, All-stupid: The intelligence of a blort fluctuates at random. They are hoarders of knowledge but do not use it to benefit themselves or others. All attempts at using blorts to steal knowledge from others and transmit the info back willingly have been massive failures. Blorts seem to know when the info they have is wanted and refuse to share.

Powerful Anomaly: The true power of the blort is still unknown, but anomaly researchers note that "it's a shock the universe has not been ripped apart yet." The leading theory on the existence of blorts is that they are manifestations of "natural unattached anomalous forces," leading them to have no gods or masters.

• The first recorded case of a blort manifestation event was by a tour guide leading a group on a hiking trip. The video shows the blort bounding out of a treeline. The group pauses and, in a fearful tone, worried it may be deadly, askes their guide what it was, at which point he responds, "Uh, what the heck is that thing.... that's a.....a blort? That's a blort! Don't worry folks, these things show up all the time" All watchers of the tape, or any other media with a blort in it, who have not seen or heard of the creature before, will gaze upon it with brief confusion before remarking that they knew what a blort was before the event.

• The saliva of large blorts is akin to a soapy bath. Owners of such blorts often "bathe in the waters" religiously. It is considered rude to meet a large blort and not touch its bathwater.

• Blorts can both receive and transmit radio waves. For what reason is unknown, though it is often explained as "just what blorts do." The signal they transmit are nonsense strings of words. Ex: "Up, up, up. 5, 5, 3, 5, 1, Launch. Round and round. It's really hot. Not coming back. -Zzzz-ssss-zzzzz- Bark." 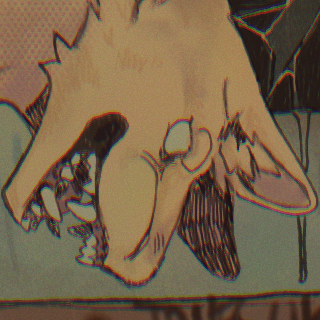 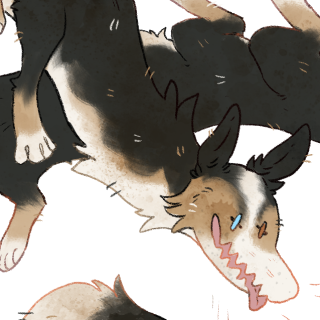 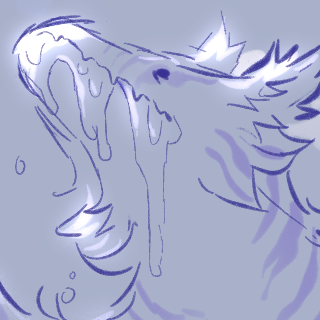