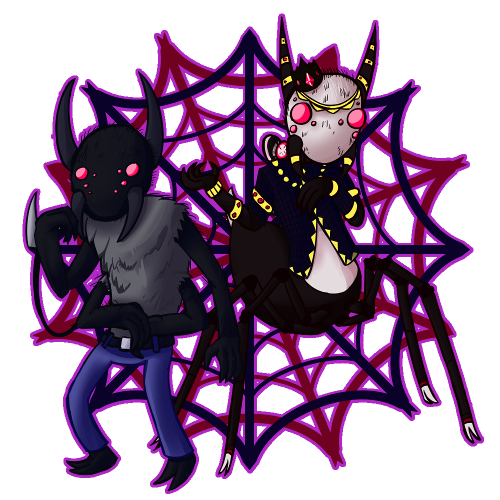 [Careful] Neutral trait
This character will be more nervous of suspicious situations, and less willing to take risks. They may put extra effort into making sure everything is safe before feeling comfortable. While this normally makes things safer for them, it can also be a huge time waster.
[Disciplined] Positive trait
This character has a certain behavior or way of working. This behavior is usually helpful to their group and commonly promotes teamwork. This character is less likely to disobey commands, is less likely to lose sanity and will likely follow routine.
[Boring] Negative trait
This character is just boring to be honest. Nothing to see here. Most people will lose sanity just hearing them drone about a subject.

Athonae only honor their queen. Worship of anyone else comes with death.

The male and female athonae have extreme sexual dimorphism and as such the only thing they have in common is that they both have dark-grey skin, with white hair covering them.

The male athonae are bipedal just as humans are, but they have 4 lengthy thick arms that have claw-like hands. Their heads are round, with two horns coming off either side of the back forming a U shape. The rest of their bodies are covered in fur-like hair, and they have a long thin tail with a stinger at the end.

The female athonae walk with 4 very long and thin legs connected to their abdomens, which are spider-like in appearance. Their torsos are also lengthy and thin, but still well built, complemented with 2 long arms ending in claw-like hands. Their heads are round like males, but the horns on their heads form a more direct V instead of a U. Their bodies, unlike the males, are void of any hair, save for their head. Females have no tail, but their abdomens do end in a small stinger. Most females are covered in gold, jewels, and all manners of finery.

All athonae can choose to wear clothes if they want, but it is not mandatory.

The athonae are very bee-like in behaviour. They work in colonies across their world directed by queens. Unlike beehives however, there is more than just one queen, there are multiple queen athonae scattered about the empire.

Despite appearances, athonae are not generally hostile, unless provoked. They are a territorial, industrious civilization that occasionally goes to war, but prefers to stay at home.

The athonae also elect a 'Grand Queen' from the many queens about the world. That queen will then govern the entire world as a sort of president, until death. That is the point of time in which they elect another. They are, however, a conquering race and scavenge the galaxies for new abandoned planets to turn into their own hives.

Their population easily exceeds 10000 offspring per queen a month. And since there are around 100 queens, the average offspring is 1,000,000 every month.

There's not much known history about the athonaes.

The furless athonae: Also known as the leatherback, is a rare type of athonae that does not have fur at all. Their skin is more leathery than other athonae to make up for this. There are only 3 queens on their planet who are leatherbacks, thus making them rare.

• Athonae aren't generally an artistic species, but an exception is made for their queens' finery. Athonea love to read about their latest fashions and popular designers have something of a celebrity status among them.

• While Athonea are very similar to spiders, few are aware of this. Comparing Athonea with spiders as an insult will usually go over their heads, and some Athonea even are scared of spiders themselves.

• As they are both interested in peaceful expansion, the Athonae often have to compete with the Prunus to find new planets to colonize. Neither race wants to wage war against the other, but they will try to obstruct each other if they can. Athonea controlled planets don't allow Prunus to take root in them, and Athonea will sometimes pollute the soil of multi-species planets on purpose so that the Prunus can't use it.